Multiphase reactors are found in diverse applications such as in manufacture of petroleum-based fuels and products, in production of commodity and specialty chemicals, pharmaceuticals, herbicides and pesticides, in production of materials and in pollution abatement [1]. A key motivation for implementing multiphase reactor technology has largely been driven by the discovery and development of new or improved catalysts for either emerging or existing processes [2]. A wealth of products are produced in multiphase catalytic reactions. Among the multiphase reaction systems, the monolith reactor, slurry bubble column and the trickle bed reactor (TBR) (Figure 1) are being used most extensively. 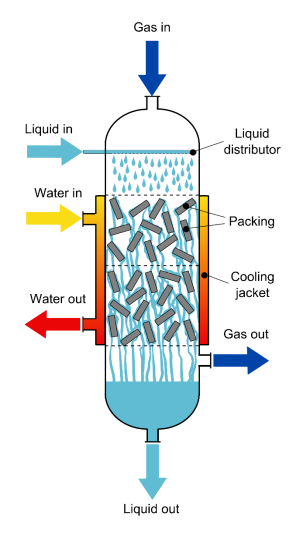 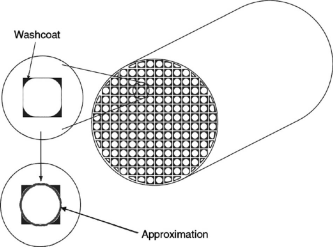 In recently years, monoliths as multiphase reactors to replace trickle-bed and slurry reactors have received more and more attention. The honeycomb monolith has been very successful in gas phase reactors, most notably as the structured support for the conversion of pollutants in vehicle exhausts. The potential of monoliths to act as a catalytic support for multiphase reactions has been recognized for over 20 years and much recent work has been done to extend the application of monoliths to liquid and gas–liquid systems [4, 5]. Monoliths offer the benefits of an absence of a need for filtering catalyst from the product, low pressure drop, high geometrical surface area, safer operation and, perhaps most significantly, potentially easy scale-up. However, the latter is crucially dependent upon being able to achieve an even gas–liquid distribution across the channels. Furthermore, maldistribution can lead to a wide residence time distribution across the radial section of monolith with consequently lower selectivity, ineffective catalyst usage and hot spots in the reactor [5, 6].

Some of the applications that have been proposed or explored include: hydrodesulphurization of oil, liquefied coal, and dibenzothiophene; hydrogenation or dehydrogenation associated with various aromatic compounds; oxidation reactions. Applications of monolith structured packed beds used for distillation and adsorption have also been reported. Now research has been done on monolith reactors in many areas, such as preparation and extruding techniques, applications and performance to various reactions, flow regime and hydrodynamics studies, mass and heat transfer, and modeling and simulation including computational fluid dynamics (CFD) simulation [7-10]. This report will analyze and summarize the performance of catalytic monolith reactor on the different reactions, such as hydrogenation, dehydrogenation [11-18] and oxidation [19-22] reactions, and mostly focus on the studies published in the last 10 years.

For multiphase reaction applications, different types of conventional reactors have been used in industry. The major ones are the trickle bed reactor (TBR), slurry bubble column reactor and the stirred tank slurry reactor. Each reactor type has its own advantages and shortcomings. A TBR is a convenient reactor compared to slurry bubble column reactor and the stirred tank slurry reactor, although larger particles must be used to guarantee moderate pressure drop. However, on the catalyst surface, where the liquid is either depleted or imperfectly covers the catalyst surface, dry areas are encountered: these substantially reduce the liquid–solid contacting efficiency of the trickle-bed reactor [23]. Besides, local hot spots may develop and cause runaways. Adding to the problem are the low gas–liquid velocities required to avoid excessive pressure drop. This requirement results in high operational costs and low productivity. For the slurry bubble column reactor and stirred tank reactor, the slurry catalysts are very small, which needs the reactors offer very simple reactor geometry, high heat removal, excellent mass transfer characteristics, and a high effectiveness factor. Moreover, it is very difficult to separate product and catalyst, and catalyst attrition in these reactors. Another major drawback of conventional reactors for multiphase reactions is the difficulty of scale-up to industrial size units [24].

Monolith reactors, as novel reactors, can overcome the above-mentioned disadvantages with their excellent design. Monolith catalysts or monolith reactors have some common features in most of the applications they are used for. These features or characteristics include: (1) low pressure drop especially under high fluid throughputs; (2) elimination of external mass transfer and internal diffusion limitations; (3) low axial dispersion and backmixing, and therefore high product selectivity; (4) larger external surface; (5) uniform distribution of flow (gas phase); (6) elimination of fouling and plugging, and thus extended catalyst lifetime; (7) easy scale-up, etc [25]. Monolith reactors with these features or characteristics can make up the shortcomings of conventional reactors and can be an attractive alternative to other conventional multiphase reactors.

Among the various chemical reactions occurring in broad range of industrial application areas, catalytic gas-liquid-solid reactions are widespread [10, 23]. These reactions occur extensively in chemical, petroleum, petrochemical, biochemical, material, and environmental industrial processes for a wide variety of products (such as hydrogenation, oxidation, and alkylation). Recent research has shown that monolithic reactors with a gas–liquid flow in small regular channels with an active component deposited on the walls can lead to performance enhancement in comparison with such conventional multiphase reactors as trickle bed [14, 26-28] and slurry reactors [29-31]. The performance enhancement is mainly attributed to the more intensive contact between all phases and better mass transfer inherent in the slug flow, which is characterized by the passage of elongated gas bubbles being separated by liquid slugs [32].

As a rule, research on monolithic reactors is focused on two different options with regard to practical realization. The first one is the application of monolithic systems as alternative to batch reactors, where a fixed catalyst (instead of a suspended catalyst) is used at superficial velocities needed for maximum conversion [33, 34]. The second one is the utilization of monolithic catalysts in the column type reactors, which usually employ randomly packed catalyst particles [35].

In this section, I select two different kinds of reactions to discuss the performance of a monolith reactor. And the performance is compared with that of a TBR operated at conditions typically employed for TBR. Moreover, I will point out some potential research orientations on the basis of the main problems encountered in recent research.

Catalytic, multiphase hydrogenation has been carried out commercially for over a century. A huge variety of reactions are accomplished via this process, using predominantly heterogeneous catalysts. In addition, product values and volumes vary enormously: by several orders of magnitude. Given this diversity it is therefore perhaps somewhat surprising that these reactions are carried out for the most part in just one reactor type: the stirred tank reactor. Furthermore, this type of reactor has been at the core of industry for over a century [36]. There are a number of other well-established alternatives used in the large-scale chemical industries [37] including the TBR, which is used almost exclusively in refinery hydroprocessing and extensively for hydrogenation in petrochemical plants. However, these reactor designs prove difficult to scaleup as key length-scales do not scale in a similar fashion. Monolith reactors, as novel reactors, can overcome the drawbacks with their distinctive design.

A comparison between the monolithic reactors with traditional trickle bed reactors was reported by Fishwick et al. for a model reaction in both terms of activity and selectivity [29]. Besides, the scale-out of a single channel to larger monoliths of 1256 and 5026 channels is analyzed, demonstrating the potential for rate and selectivity enhancements whilst allowing ease of scale-out. The selective hydrogenation of 2-butyne-1,4-diol was studied as the model reaction. This is a consecutive reaction widely applied in the production of butane-1,4-diol, a raw material used in the polymers industry and in the manufacture of tetrahydrofuran (THF) [38]. Several side reactions are possible, as illustrated in Figure 3, for example the 4-hydroxybutyraldehyde and its cyclic hemiacetal, 2-hydroxytetrahydrofuran, as a consequence of double-bond isomerisation and hydrogenolysis reactions [15]. 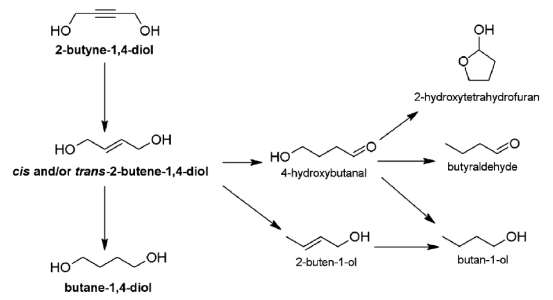 The monolith reactor achieved the highest selectivity towards the alkene intermediate in the hydrogenation of 2-butyne-1,4-diol when compared to trickle bed reactors. Loss of selectivity is for the most part due to the formation of non-hydrogenation side products. The high selectivity observed in the monolith can be partly attributed to the high dispersion of palladium and small palladium particle size on the washcoat support. However, differences in product distribution between single- and two- phase modes of operation suggest that mass transfer of hydrogen to the catalyst surface also influences the selectivity. The reactor design and operating mode can therefore be optimised to achieve maximum selectivity. Additionally, a comparison of a single capillary with 5 and 10 cm monoliths (1256 and 5026 channels, respectively) indicates that initial reaction rates and selectivity are maintained.

8. Gundlapally, S.R. and V. Balakotaiah, Analysis of the effect of substrate material on the steady-state and transient performance of monolith reactors. Chemical Engineering Science, 2013. 92: p. 198-210.