Abstract— PbS quantum dots have attracted more attention in quantum dot sensitized solar cells as sensitizers on photoanode because of its high efficiency, high absorption coefficient and broad range of absorption. In this paper, we synthesized PbS quantum dots on the glass substrate coated with TiO2 paste by SILAR (Successive Ionic Layer Adsorption and Reaction) method The quantum dot size was varied by varying the number of cycles and the UV-Vis-NIR Spectrophotometer ,XRD Diffractometer and AFM were used to characterize the quantum dots.

Quantum dot sensitized solar cells are the next generation solar cells because of their ability to absorb more light owing to its high surface to volume ratio, size dependent optical properties, ease of fabrication and low cost. Most of the research has been done for II-VI semiconductor compounds and out of these compounds PbS is found to have more efficiency and more absorption coefficient. Moreover it has high Bohr radius (around 18nm) [1] which gives it stronger quantum confinement and broadens the optical absorption area. PbS quantum dots have wide absorption range covering visible and near infrared,[2].

In this paper, we have focussed on the development of PbS quantum dot layer on the electrode for solar cell application as a photoanode. For maximum electron transport from quantum dot sensitizer to the electrode an intermediate layer of TiO2 is deposited on the glass substrate by Doctor Blade method. The layer after appropriate heat treatment is subjected to the SILAR(Successive Ionic Layer Adsorption and Reaction) process where the lead sulphide quantum dots are deposited by use of appropriate concentration of precursors and proper dipping and rinsing times. The size of the quantum dots are varied by increasing the SILAR cycles. The advantage of SILAR over other techniques is that the synthesis takes place at room temperature and is simple.The optical characteristics and diameter of the quantum dots are characterized by UV-Vis-NIR Spectrophotometer and Contact-mode Atomic Force Microscope imaging. The phase and type of PbS formed is determined by Xray diffractometer.

Titanium dioxide(TiO2) nanopowder-20nm anatase phase , 2M nitric acid (HNO3) were required for the preparation of TiO2 paste and methanolic solutions of Lead Nitrate(PbNO3),methanol and sodium sulphide( Na2S) were used for the SILAR process and acetone for cleaning purposes.

B. Preparation of TiO2 film

The Titanium dioxide paste is prepared by making a mixture of 1.2g of TiO2 nanopowder and 0.6mL of 2M conc. nitric acid (HNO3).This paste is uniformly formed on the glass substrate by doctor blade method in which the TiO2 paste is deposited on one end of the area marked by tapes and uniformly spread by using a blade or a glass slide. The TiO2 coated glass was then dried at 80oC for half an hour followed by annealing at 450oC for 30 mins. This improved the adsorption of the TiO2 film.

For coating PbS quantum dots by SILAR method, the TiO2 coated glass is successively dipped in methanolic solution of 0.02M Pb(NO)3 and methanolic solution of 0.02M Na2S for 1 min each. Lower the molarity more dispersed is the quantum dot deposition on the TiO2. Between each dipping the substrate is rinsed with methanol for 1 min and air dried for some time to remove the excess precursors. This is one cycle which was repeated for increasing the quantum dot sizes. Figure 1 shows the colour variation observed with change in the SILAR cycles. It was observed the colour of the film changed from white (TiO2) to reddish black in colour when the SILAR cycle was increased to 4 cycles. With increase in the cycles, the particle size increased and hence the energy bandgap Eg decreased indicated by the colour change in the film.3]

Fig.1. Sample images showing the colour changes with increase in the SILAR cycles

UV-Vis-NIR spectrophotometer ( Jasco Spectrophoto-meter V670) was used to observe the absorption properties of TiO2 and TiO2 coated PbS quantum dots. The absorption plots were taken using glass slides as the reference and the wavelength range extended from UV to near Infrared. It provided the information like increase in the absorption after depositing PbS and also bandgap information from tauc plot. The Xray diffractometer was used to obtain the diffraction patterns of the TiO2 and PbS films and to identify the phases and type of quantum dot obtained. 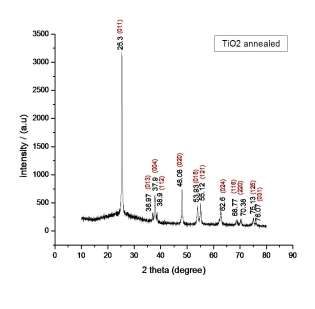 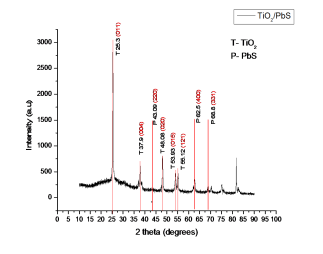 The absorption v/s wavelength curve and the tauc plot obtained from UV-Vis-NIR Spectrometer and Diffusive Reflectance Spectrometer respectively are shown in Fig. 3 and Fig. 4. 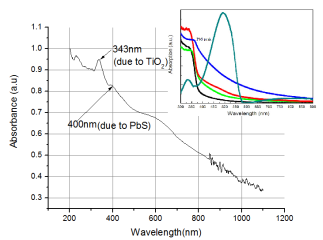 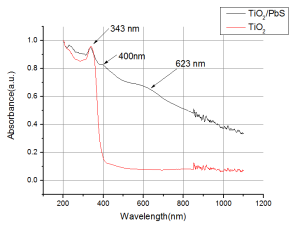 Fig.3. Absorption Curves of (a) TiO2/PbS. Inset:Absorbance v/s Wavelength curve of PbS film (reproduced from ref [5]) (b) TiO2 and TiO2/PbS showing 60% increase in absorption due to deposition of PbS quantum dots. 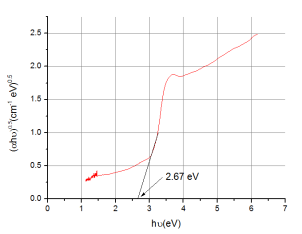 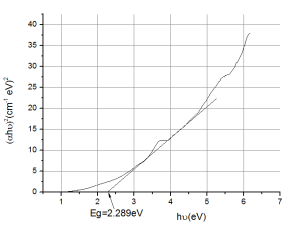 Fig.4a shows the tauc plot of TiO2 which is (αhυ) 0.5 versus hυ. This is due to the indirect nature of TiO2. From the plot it can be inferred that the bandgap of the 20 nm TiO2 is 2.67 eV. Fig.4b shows the tauc plot of TiO2/PbS which is the plot of (αhυ)2 versus hυ.[4] The linearity of the tauc plot confirms its direct transition and the extrapolation of the linear portion on the x-axis gives the bandgap value of 2.289eV. The bandgap thus obtained is more than the bulk bandgap of PbS which is around 0.4eV. This increase is due to the decrease of size as compared to the bulk. The particle size can be estimated from the bandgap value using the empirical formula developed by Iwan Moreels et al. [6]

The photoanode for the solar cell was thus made by depositing PbS quantum dots on TiO2 coated glass substrate using SILAR method. From the spectrophotometer plots, the TiO2/PbS film was observed to give 66.7% more absorbance as compared to only TiO2 film. Also the particle size of 1.64nm was estimated from the tauc plot. The increase in the absorption even with a very small particle size of PbS makes it a very good sensitizer for quantum dot sensitized solar cells as compared to other quantum dots. However the hazards due to its poisonous nature urge the need for a good alternative.