Cytokinins (CK) are a class of plant growth substances (phytohormones) that promote cell division, or cytokinesis, in plant roots and shoots. They are involved primarily in cell growth and differentiation, but also affect apical dominance, axillary bud growth, and leaf senescence.

NATURE OF CYTOKININS: Cytokinins are compounds with a structure resembling adenine which promote cell division and have other similar functions to kinetin. Kinetin was the first cytokinin discovered and so named because of the compounds ability to promote cytokinesis (cell division). Though it is a natural compound, It is not made in plants, and is therefore usually considered a “synthetic” cytokinin (meaning that the hormone is synthesized somewhere other than in a plant). The most common form of naturally occurring cytokinin in plants today is called zeatin which was isolated from corn (Zea mays)

Cytokinins have been found in almost all higher plants as well as mosses, fungi, bacteria, and also in tRNA of many prokaryotes and eukaryotes. Today there are more than 200 natural and synthetic cytokinins combined. Cytokinin concentrations are highest in meristematic regions and areas of continuous growth potential such as roots, young leaves, developing fruits, and seeds (Arteca, 1996; Mauseth, 1991; Raven, 1992; Salisbury and Ross, 1992).

HISTORY OF CYTOKININS: In 1913, Gottlieb Haberlandt discovered that a compound found in phloem had the ability to stimulate cell division (Haberlandt, 1913). In 1941, Johannes van Overbeek discovered that the milky endosperm from coconut also had this ability. He also showed that various other plant species had compounds which stimulated cell division (van Overbeek, 1941). In 1954, Jablonski and Skoog extended the work of Haberlandt showing that vascular tissues contained compounds which promote cell division (Jablonski and Skoog, 1954). The first cytokinin was isolated from herring sperm in 1955 by Miller and his associates (Miller et al., 1955). This compound was named kinetin because of its ability to promote cytokinesis. Hall and deRopp reported that kinetin could be formed from DNA degradation products in 1955 (Hall and deRopp, 1955). The first naturally occurring cytokinin was isolated from corn in 1961 by Miller (Miller, 1961). It was later called zeatin. Almost simultaneous with Miller Letham published a report on zeatin as a factor inducing cell division and later described its chemical properties (Letham, 1963). It is Miller and Letham that are credited with the simultaneous discovery of zeatin. Since that time, many more naturally occurring cytokinins have been isolated and the compound is ubiquitous to all plant species in one form or another (Arteca, 1996; Salisbury and Ross, 1992).

BIOSYNTHESIS AND METABOLISM: Cytokinin is generally found in higher concentrations in meristematic regions and growing tissues. They are believed to be synthesized in the roots and translocated via the xylem to shoots. Cytokinin biosynthesis happens through the biochemical modification of adenine. The process by which they are synthesized is as follows (McGaw, 1995; Salisbury and Ross, 1992): A product of the mevalonate pathway called isopentyl pyrophosphate is isomerized. This isomer can then react with adenosine monophosphate with the aid of an enzyme called isopentenyl AMP synthase. The result is isopentenyl adenosine-5′-phosphate (isopentenyl AMP). This product can then be converted to isopentenyl adenosine by removal of the phosphate by a phosphatase and further converted to isopentenyl adenine by removal of the ribose group. Isopentenyl adenine can be converted to the three major forms of naturally occurring cytokinins. Other pathways or slight alterations of this one probably lead to the other forms. Degradation of cytokinins occurs largely due to the enzyme cytokinin oxidase. This enzyme removes the side chain and releases adenine. Derivitives can also be made but the pathways are more complex and poorly understood. 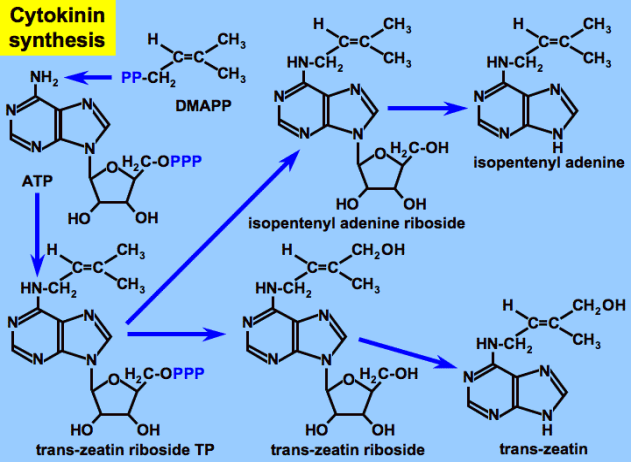 Cytokinins are involved in many plant processes, including cell division and shoot and root morphogenesis. They are known to regulate axillary bud growth and apical dominance. The “direct inhibition hypothesis” posits that these effects result from the cytokinin to auxin ratio. This theory states that auxin from apical buds travels down shoots to inhibit axillary bud growth. This promotes shoot growth, and restricts lateral branching. Cytokinin moves from the roots into the shoots, eventually signaling lateral bud growth. Simple experiments support this theory. When the apical bud is removed, the axillary buds are uninhibited, lateral growth increases, and plants become bushier. Applying auxin to the cut stem again inhibits lateral dominance.

While cytokinin action in vascular plants is described as pleiotropic, this class of plant hormones specifically induces the transition from apical growth to growth via a three-faced apical cell in moss protonema. This bud induction can be pinpointed to differentiation of a specific single cell, and thus is a very specific effect of cytokinin.

Cytokinins have been shown to slow aging of plant organs by preventing protein breakdown, activating protein synthesis, and assembling nutrients from nearby tissues. A study that regulated leaf senescence in tobacco leaves found that wild-type leaves yellowed while transgenic leaves remained mostly green. It was hypothesized that cytokinin may affect enzymes that regulate protein synthesis and degradation.

CYTOKININS FUNCTION: A list of some of the known physiological effects caused by cytokinins are listed below. The response will vary depending on the type of cytokinin and plant species (Davies, 1995; Mauseth, 1991; Raven, 1992; Salisbury and Ross, 1992).

ROLE OF CYTOKININS IN PLANTS:

The results of applied cytokinins could include release of apical dominance as you demonstrated in kidney beans in laboratory.

Cytokinins regulate the cell cycle as we learned early in the semester.

Cytokinins delay senescence. You carried out this project at home with isolated wheat primary leaf tips in various solutions of plant hormones. Those treated with cytokinins should have demonstrated delayed senescence (stayed green longer). Of course, remember the auxin dose response…there is such a thing as too much of a good thing!

Cytokinins cause nutrient diversion. Cytokinin-treated leaves become “sinks” for nutrients such as amino acids. This is shown in a classic experiment in plant physiology

As you can see in the diagram below, the natural cytokinin ribosides can be attached to sugars to form glycosides that have reduced or no cytokinin activity. The plant also can produce enzymes to cleave the sugar and restore full cytokinin activity. Thus conjugation with sugars and retrieval from these bound forms is a possible pathway in plant cells. 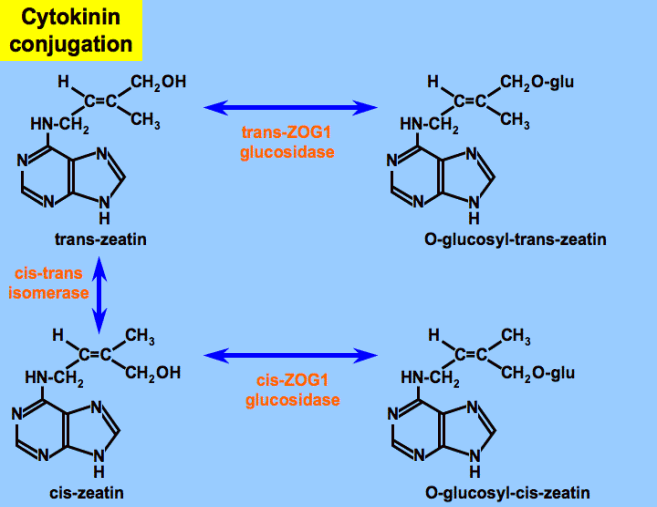 However, it is also true that the ribosides themselves are a form of conjugation. All studies to date seem to indicate that the free-base has to be cleaved from the ribose too before the compound has any true activity. Plants carry out this reaction easily and rapidly, so ribosides appear to have activity on their own, but this is an artifact. Cells in culture require the cytokinin to be free…these sometimes lack the enzymes to cleave the ribose, so supplied ribosides are inactive and the free-base must be supplied in the medium.

The native cytokinins also occur as modified bases in RNA and DNA strands. In fact cis-zeatin (a less active form) is found in many tRNA molecules in almost all living cells of all species! The extent to which the free cytokinin pool is altered by conjugation with other nucleotides or released from nucleotide polymers is not clear.

In addition to synthesis and conjugation, the pools of cytokinins can be altered by degradation. Below is how one natural cytokinin is made inactive: 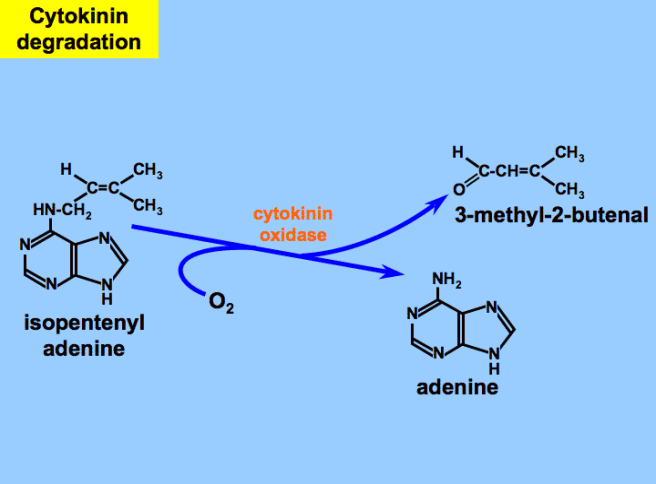