1,3-Butadiene with its molecular structure of H2C=CH@CH=CH2 have widely synonym as butadiene,”,”-butadiene, divinyl, buta-1,3-diene, vinylethylene, vinylethylene, bivinyl, erythrene, biethylene, and pyrrolylene refer to the same physical and chemical properties. It has same Chemical Abstracts Service (CAS) registry number which is 106-99-0, and its Registry of Toxic Effects of Chemical Substances (RTECS) number is EI9275000. As compared to the air, the conversation factor of to 1ppm butadiene is equal to 2.21 mg/m3 in the air. Further important identity and physicochemical properties of butadiene is described as per Table 1. 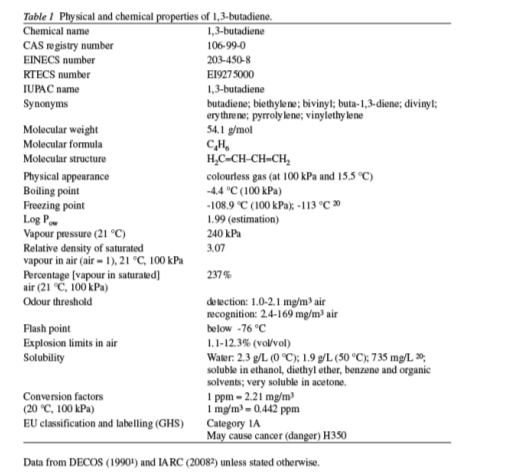 As part of human activities, 1,3 Butadiene being used primarily and commercially in the making of synthetic rubbers and polymers. 1,3 butadiene was produced by complex and specific process as co-product of ethylene during cracking at high temperature (produced C4) at the steam crackers units.

The crude C4 that produced from steam cracker units or process then fed to the butadiene extraction units for separation process of butadiene, isobutenes and the other C4s (byproduct called as Raffinate 1) through extractive distillation.

The most advanced Butadiene extraction technology is come from BASF NMP Process in which 1,3 Butadiene is extract as per Diagram 1 by utilized N-methyl-2-pyrrolidone (NMP) as solvent. 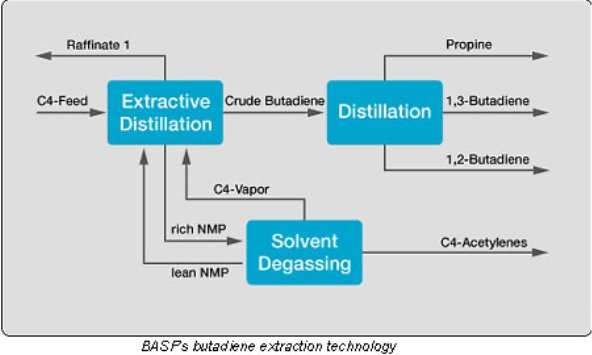 1,3-Butadiene is colourless gas at room temperature with gasoline or mild aromatic odor, highly flammable when exposed to heat and insoluble in water but soluble in ether, acetone, benzene and ethanol. It is very reactive: it may form acrolein and peroxides upon exposure to air, it can react with oxidizing materials, and it polymerizes readily, particularly if oxygen is present. Butadiene is stabilized with hydroquinone, catechol, t-butyl catechol or aliphatic mercaptans1,2.

In addition from that, as per GHS-US classification, 1,3 Butadiene is classified and hazard label as per Table 2 and Diagram 2 below:

1,3 Butadiene is the main raw material to manufacture variety type of rubbers and plastics. It is being used as an intermediate ingredient; monomers in production of polymers, synthetic rubbers or elastomers, and other chemicals. As substitution for natural rubber, Butadiene being used widely in producing synthetic rubbers and polymer which offers numerous advantages in term of improvement in performance, safety and functionality, and lower costs.

Neoprene or poly-chloroprene is used extensively in manufacture of latex goods which is non-tire application such as gloves, foams, waders and wearsuits.

Nitrile Rubber(NR) have variety of end product which mainly used to produce rubber hoses, gasket and seals for automobiles .

Remaining 25% of 1,3 Butadiene was used to produce polymers. Polymerd derived from 1,3 include Acrylonitrile-butadiene-styrene (ABS) resins, poly-butadiene polymers, nitrile barrier resins and thermoplastic resins. Among the others, ABS resin was widely used in large volume of thermoplastic resin, containing about 20%- 30% of 1,3 butadiene by weight to produce automobiles part and appliances in automotive industry .

Apart from that, 1,3- Butadiene also is used in the production of adhesives for packaging, transporting, or holding food; in components of paper and paperboard that are in contact with dry food; and as a modifier in the production of semirigid and rigid vinyl chloride plastic food-contact articles.

The highest exposure of butadiene is mainly occurs in occupational settings or workplace area and its surroundings. Potential areas include several industries like: petroleum refinery and operation plant (where the crude C4 cracking process take over and involves butadiene extraction, gasoline production and distribution), distillation and production of butadiene monomer plant, factory or manufacturer of various butadiene based product like synthetic rubber and polymers plant such as tires, gloves and variety injection moulding industries (IARC, 1999).

Based from data collected from European Chemical Bereau during 1984 to 1987, the arithmetic means of butadiene concentration at petrochemical and petroleum refinery plant industries area in several location of European countries is ranged from 0.1 to 6.4 mg/m3 Other than that, by refer from survey conducted by occupational hygiene of United Kingdom shows that the mean concentration of butadiene generally below 11mg/m3 with most below 2.2 mg/m3 for butadient production areas while in polymer manufacturer area time-weighted averaged around (4.4 to 6.6mg/m3). Meanwhile at USA in 1985, the arithmetic mean concentration is ranged from 1 to 277 mg/m3 for monomer production plant and 0.04 to 32mg/m3 for polymer production plant. (IARC, 1999; European Chemicals Bureau, 2001).

For non-occupational exposure area, it is obtained that the butadiene mean concentration in ambient air is much lower in Î¼g/m3 measured than reported in occupational exposure area which measured in mg/m3. Elevation of concentration observed occurs at the vicinity of source like municipal structural fires area, smoking shed or cigarette smoke area, brush and wood fires

Butadiene has been widely detected in ambient air but at much lower levels (Î¼g/m3) than reported in some occupational settings (mg/m3). Elevated concentrations may occur in the vicinity of point sources, such as municipal structural fires, wood and brush fires; cigarette smoking; volatilization gasoline area as well as combustion through vehicle emissions (IARC, 2008).

Based on data and study conducted during 1990 and 1994, involvement of 14 cities, rural or towns at Ontario, Canada shows that the results from 1611 samples of outdoor air collected for mean concentration of butadiene is ranged around 0.1Î¼g/m3 with maximum of 1.7 Î¼g/m3. (Health Canada, 2000).

Exposure of 1,3 Butadiene can effect human health and the severity can be separated into two, which is acute and chronic. For acute exposure, it can be further split into high doses and low doses. Acute low doses exposure will caused irritation to nose, eyes, lungs and throat. These frostbite injury also may lead to occur through exposure to skin.

Human epidemiological studies has been conducted to identify the Chronic effects to human that cause by exposure to 1,3-butadiene, the result shown the effect to human can cause cancer and cardiovascular diseases.

However, due to some limitation and cofounding factors in study of cancer to human due to exposure by 1,3-Butadiene such as simultaneous exposure to syrene and benzene, smoking; the exact causal factors unable to established well. Extensive lab experiment involving animal such as mice and rat has been performed and study to observe relationship of chronic exposure of 1,3-butadiene to cancer. The studies through mice and rat has shown the developmental problems and reproductive effected the animals. Through this study, 1,3-Butadiene has been classified as human carcinogen from EPA and rated as A2; suspected human carcinogen as per The American Conference of Governmental Industrial Hygienists (ACGIH). Further human effect exposed to 1,3-butadiene explain on Table 2.

Based on epidemiological studies conducted shows that high tendancy or risk of leukemia or others cancer to attacked on the lymphohaematopoietic system when chronic exposure to 1,3-Butadiene. This involve three studies on employed workers at 1,3-Butadiene production facility of styrene-butadiene-rubber(SBR) plant where the major exposure is 1,3-butadiene monomer alone. The result of the studies shows the same relation or overlapping cohort population. It was observed in two studies at butadiene monomer facility, overall have slightly excess of mortality from leukaemia while in third study shows decrease in mortality of leukaemia. The increased mortality from leukaemia in one of the monomer industry cohorts was more pronounced among workers who had been exposed at high levels during the first years of production (Second World War). In this cohort, no increase in leukaemia was observed with duration of exposure or cumulative exposure.

Based on the study on SBR workers by University of Alabama at Birmingham (USA) considered as very informative data where the study involves in examine the mortality rates of about 17,000 workers through eight facility in Canada and USA. A limiting factor in the evaluations was that the diagnosis and classification of lymphatic and haematopoietic malignancies are very complex and have undergone several changes over the course of time.

Although overall mortality from leukemia was only slightly higher in the update of the most recent cohort, a larger increase of deaths from leukemia seen in workers in the most highly exposed from plants and one employee per hour paid, especially those who was hired in early years and has ten years or more jobs. Furthermore, a significant correlation between cumulative exposure of 1,3-butadiene and leukemia deaths observed in this study. A recent analysis shows that the exposure-response relationship for 1,3-butadiene and leukemia are free from exposure to styrene and dimethyldithiocarbamate.

Studies with mice showed increased tumour formation in various organs in both sexes at 1,3-butadiene exposures to approximately 14 mg/m3 (females) and 44 mg/m3 (males). This was not observed in rats at exposures up to 2,200 mg/m3, likely due to the crucial role of oxidative metabolism: 1,3-butadiene requires metabolic activation to generate electrophilic epoxides in which important species differences exist (mice are more efficient in the production of epoxide metabolites of butadiene, while rats and humans are more efficient in the hydrolytic detoxification of these metabolites). Many tests on mutagenicity, genotoxicity and mechanism of action clearly indicate that 1,3-butadiene is a genotoxic compound in humans and in experimental animals, requiring metabolic activation to generate electrophilic and DNA-reactive epoxides (epoxybutene, epoxybutanediol and diepoxybutane), one or more of which are considered to be the ultimate carcinogens.

Reduce the risk of hazardous

In order to reduce risk of hazardous of 1,3butadiene, many precaution and controls shall take in consideration. Separated into two; occupational and non-occupational exposure.

The higher human exposure to 1,3 Butadiene is come from occupational environment. Appropriate control can be taking in consideration to reduce the risk exposure by include appropriate engineering controls, hand protection, eye protection, skin and body protection, respiratory protection and environmental exposure control.