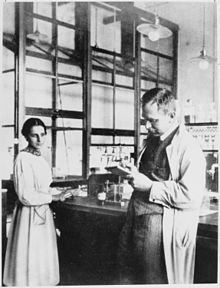 Otto Hahn was a brilliant german chemist, who was regarded as “the father of nuclear chemistry” for his work in radiochemistry and radioactivity. He also was a great political activist fully against future testing or use of the nuclear weapons. Otto was the son of a prosperous glazier and entrepreneur Glasbau Hahn and his wife Charlotte Hahn. Otto was born in south Germany (Frankfurt am Main) on March 8th 1879. He was the youngest of the family and had three brothers Karl, Heiner and Julius. Ottos started to have an interest in chemistry at the age of 15 but his father wanted him to become an architect, but he ended up going to University of Marburg for chemistry. He began to study chemistry and mineralogy with side interest in philosophy and physics. Later in his college career Otto drops some physics and science related classes in favor of art and philosophy. During his college years he was in a student fraternity which is a forerunner of today’s Nibelungia Fraternity and he graduated with his doctorate in 1901.

After graduation Otto does a year of military service and comes back to the university to work as a chemistry leacture assassist with hopes of going into industry, but after two years he moved to London to learn english and do research with Sir WIlliam Ramsay. While with Ramsay, Otto was purifying a crude radium and discovered a new radioactive substance, which he called radiothorium. Excited by his early success and encouraged by Ramsay, he decided to continue with research on radioactivity rather than go into industry. With Ramsay’s support he obtained a post at the University of Berlin. Before taking it up, he decided to spend several months in Montreal with Ernest Rutherford to gain further experience with radioactivity. After returning to Germany, Hahn was joined by Lise Meitner, an Austrian-born physicist, and five years later they moved to the new Kaiser Wilhelm Institute for Chemistry. There Hahn became head of a small, independent department of radiochemistry.

Otto met his wife to be, Edith Junghans, an art student at the “Königliche Kunstschule” (Royal Academy of Art) in Berlin. The couple married in Edith’s native city of Stettin, on 22 March 1913. Sadly World War I started the year after their marriage. REsulting in Hahn have to go to war. Otto was enlisted to a regiment, that was focused on the development of chemical warfare. In the regiment he worked with James Franck and Gustav Hertz, under the direction of Fritz Haber. Otto’s unit created and tested poison gas that was produced for military purposes. In December 1916, Hahn was transferred out of the front lines back to Berlin, where he was able to resume his radiochemical research. After the war, Hahn devoted himself to his work on radioactivity and with Meitner’s help, they were among the first to isolate protactinium-231, an isotope of a recently discovered (at that time) radioactive element protactinium. Otto then devoted the next 12 years of his career to study usefulness of radioactive methods to solve chemical problems. On February 1921, Otto finally published his first report on the discovery of uranium Z (later known as Pa 234 ), the first example of nuclear isomerism, this became a huge principle after Otto’s time when nuclear physics started getting more attention. In 1934 Hahn found the work of Enrico Fermi, which found that when the heaviest natural element, uranium, is hit by neutrons, several radioactive “daughter” molecules are created. Fermi’s results stated that artificial elements were formed that were comparable uranium. Hahn, Meitner and Strassmann repeated Fermi’s experiment and obtained results that were comparable with Fermi’s results but as the team did more trails, the data got worse. The Hahn group did discover that multiple isotopes of four elements resulted from the fission of uranium and that those elements had atomic numbers of 93 through 96.This was later was found to be wrong. Hahn’s group was the first scientists to calculate the half-life of U 239 which also proved chemically that it is an isotope of U. They were unable to identify the decay product of 239 U and continue this work to its fruition. The decay product is neptunium but this task was completed later by Edwin McMillan and Philip H. Abelson. In the year 1938 Meitner fled Germany to escape the persecution of the Jews, but Hahn and Strassmann stayed and continued the research. Hahn was her secret supporter gave her a diamond ring he had inherited from his mother, to be used to bribe the frontier guards if required. In late 1938 Hahn and Strassmann found isotopes of an alkaline earth metal in the by-products produced from a nuclear reactions. The metal was found to be organic barium salt. Finding an alkaline earth metal in the results did not fit with the other elements found but was a major step in their research. Hahn though that the by-product could be radium radium, produced from two alpha-particles coming away from the uranium nucleus. At the time, Hahn thought it had to be radium because even two alpha particles coming away from the nucleus from this process was considered very unlikely. So the idea of uranium losing ~100 neutrons and turning into barium was seen as impossible. During a trip to Copenhagen, Hahn mentioned these results to well known scientists Niels Bohr and Lise Meitner. Using his colleagues advice he refined the experiment which lead him to the results he was looking for. On December 1938 his experiment a radium-barium-mesothorium-fractionation as Otto called it was performed and produced three isotopes that were observed as barium instead of the expected radium. This gave Otto the evidence he needed. In 1938 Hahn mailed Meitner a report of his findings. She developed an explanation to the results and together they named it nuclear fission. Lise Meitner and her nephew, a physicist Otto Robert Frisch, came to the same conclusion and worked out the basic calculations of nuclear fission, which was officially coined by Frisch, and became globally known. Over the following months, two articles were published that explained and had experimental proof on the nuclear fission written by Frisch and Meitner. In their second publication they talked about uranium fission which they called Uranspaltung. This article predicted the freeing of additional neutrons during the fission process, which Frédéric Joliot and his team proved to be chain reaction. 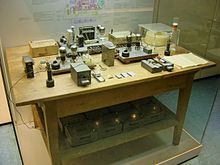 During the war and around 1945, Otto Hahn together with his assistants had a list of 25 elements and about 100 isotopes whose existence he had demonstrated through his experiments. The disastrous implications of this discovery were realized by scientists before the outbreak of World War II, and a group was formed in Germany to study possible military developments. Much to Hahn’s relief, he was allowed to continue with his own researches free of military interference.At the end of World War II in 1945 Hahn was suspected of working on the German nuclear energy project to develop an atomic bomb, but his only connection was the discovery of fission; he did not work on the program. In April 1945, Hahn and nine leading German physicists were taken into custody by the Alsos Mission and taken to Cambridge, England, from 3 July 1945 to 3 January 1946. While they were there, the German scientists learned of the dropping of the American atom bombs on Japan. Hahn took this very bad, as he felt that because he had discovered nuclear fission he shared responsibility for the death and suffering of tens of thousands of innocent Japanese people. Early in January 1946, the group was allowed to return to Germany. While he was in England he was told that they awarded him the Nobel Prize for 1944. The Nobel of 1944 was for chemistry, Otto’s discovery of the fission of heavy atomic nuclei.

From 1948 to 1960 Otto Hahn was the founding President of the newly formed Max Planck Society for the Advancement of Science, which through his tireless activity and his worldwide respected personality succeeded in being renown in the the scientific community. Although now aged and retired, he was still a vigorous man; a lifelong mountaineer, he maintained physical fitness during the enforced stay in England by a daily run. On his return to Germany he was elected president of the former Kaiser Wilhelm Society and became a respected public figure, a spokesman for science, and a friend of Theodor Heuss, the first president of the Federal Republic of Germany. Otto campaigned against further development and testing of nuclear weapons. In January 1958, Otto Hahn, together with his friend Albert Schweitzer signed the Pauling Appeal to the United Nations in New York for the “immediate conclusion of an international agreement to stop the testing of nuclear weapons”, and in October, he signed the international Agreement to call a meeting to draw up a world constitution on the issue of nuclear weapons. He never tired of warning urgently of the dangers of the nuclear arms race between the great powers and of the radioactive contamination that would lead to the destruction of the planet. Honours came to him from all sides; in 1966 he, Meitner, and Strassmann shared the prestigious Enrico Fermi Award. As well as Hahn was also repeatedly nominated for the Nobel Peace Prize by a number of international organizations but never got a second one. This period of his life was saddened, when, their only child, Hanno, born in 1922, which became a distinguished art historian and architectural researcher, who was also known for his discoveries in the early Cistercian architecture of the 12th century. In August 1960, while on a study trip in France, Dr Hanno Hahn was involved in a fatal car accident, together with his wife and assistant Ilse Hahn, leaving a 14 year old son. The loss of his only son devastated him and his wife never recovered from the shock. Hahn died in 1968, after a fall; his wife outlived him by only two weeks. Hahn’s death did not stop his popularity, proposals were made at many different times, that the newly synthesized element no. 105 should be named hahnium in Hahn’s honor. But, sadly it did not go through and was named hassium after it’s finders. Also In 1964 the only European nuclear-powered civilian ship, the freighter NS Otto Hahn, was named in his honor. Many cities and districts in the German-speaking countries have secondary schools, streets, squares and bridges throughout Europe bearing Otto’s name. More than twenty states worldwide have honored Otto Hahn by issuing coins, medals or stamps with his portrait.