The body’s metabolism is responsible for all the physical and chemical processes that convert or use energy. One of these processes is breaking down and digesting food. (National Institutes of Health , 2014) Food that is not broken down properly can lead to a buildup within the body and can be toxic or interfere with the body’s normal function. This build up can present with many different symptoms. Some of these symptoms can lead to developmental delays especially if left untreated or not controlled.(National Institutes of Health , 2013) The disorders that will not allow the body to properly turn food into energy are known as, inborn errors of metabolism. Though these are considered rare genetic disorders, there are many. Here, however, we will focus on just one, Ornithine Transcarbamylase Deficiency.

Ornithine Transcarbamylase (OTC) deficiency is the most common urea cycle disorder affecting 1 in every 30,000 people. The urea cycle is the body’s way to dispose of excess nitrogen causing a buildup of ammonia within the body. 34% of patients will present within the first 30 days of life. (Sloas, 2013) These patients appear normal with no symptoms at birth but by day 2 to 3 they are extremely ill when they suffer from the first substantial buildup of ammonia in the body (Ëƒ150µmol/L), also known as a hyperammonemic episode. (Jones, 2013) These patients may present with vomiting, poor feeding, irritability, fever and limpness. Prompt action needs to be taken to avoid critical long term affects. Some long term effects from hyperammonia can include seizures, swelling of the brain, developmental delays and liver failure. Many will not survive their first hyperammonemic episode and those that do will become hyperammonemic again. (Lichter-Konecki U, 2013)

Late onset and partial disease of OTC deficiency disorder can also occur. Both late onset and partial disease are rare in both males and females. In either situation most will suffer a hyperammonemic episode at some point in their life. They may show mild presentation or not present at all until they suffer from severe illness, fasting, pregnancy or a new medication. These patients may present with anorexia, fever, irritability, rapid breathing, low muscle tone, vomiting, diarrhea/constipation, altered mental status, sleepiness, combativeness, psychosis, tremor, seizures and coma. (Sloas, 2013) All will also suffer from some type of neurological disorder such as developmental delays, learning disabilities, intellectual disabilities and attention deficit hyperactivity disorder (ADHD).(Lichter-Konecki U, 2013)

When we eat, enzymes help break the food down so that our bodies can absorb the nutrients from the food. If the enzyme needed to break down the nutrients is nonexistent or deficient it halts one of the steps in the breakdown of our food for energy, and causes disease. When we eat protein it is broken down into essential and non-essential amino acids. The amino acids are converted to pyruvate then to oxaloacetic acid at which point they are introduced to the Krebs cycle. The Krebs cycle is where the majority of the energy from the food we eat is made. (O’Neill, 2013)

The Urea cycle is made up of five steps. The first step is the conversion of bicarbonate and ammonia to carbamyl phosphate. Next is the formation of citrulline from ornithine and carbamyl phosphate. The third step is the conversion of citrulline and aspartate to argininosuccinate. The fourth step is the cleavage of argininosuccinate to form arginine. The final step is the degradation of arginine to form urea and ornithine. (Figure 1) At this point the urea can be disposed of through the body in urine. This process is catalyzed by the enzymes that exist in the liver. One of these enzymes is Ornithine Transcarbamylase. (Shambaugh III, 1977) Ornithine Transcarbamylase is an enzyme of the liver and intestinal mucosa that catalyzes the breakdown of citrulline from ornithine and carbamyl-phosphate. In OTC deficiency this process is halted. Now the body cannot detoxify ammonia to make urea, a substance that is disposed of through urination and the ammonia builds up within the system. (Heringlake, Boker, & Manns, 1997) The 3rd step, the conversion of citrulline and aspartate to argininosuccinate, is the link between the Krebs cycle and the Urea cycle. 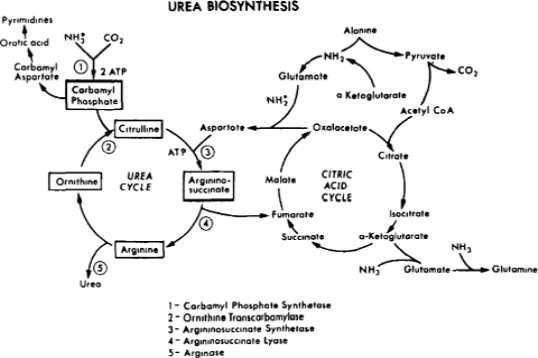 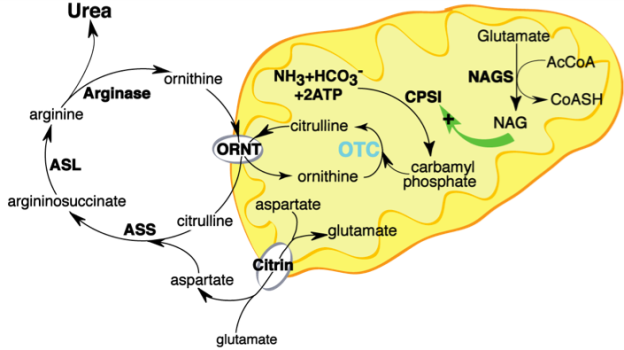 Figure 2 Urea Cycle “The urea cycle functions primarily in the liver, and is a metabolic pathway that detoxifies ammonia by converting it into urea. Ammonia is generated from the conversion of proteins and nucleic acids in our diet as well as due to normal cellular turnover. Defects of the urea cycle result in hyperammonemia which can progress to brain edema and result in cognitive impairment or death.” (Children’s National Medical Center, 2007)

OTC deficiency is a disorder involving the mutation of the ornithine transcarbamylase gene, located on the short arm of the X chromosome at position 21.1. (Sloas, 2013) (Figure 3) OTC deficiency is an X linked disorder and therefore will mostly affect males, especially early onset as a baby. More than 300 mutations have been identified in patients that have OTC deficiency. Most are single base alterations that alter the amino acid code. Most families have mutations that only occur within their own genome usually found at the CpG dinucleotides. CpG dinucleotides are where the cytosine nucleotide and guanine nucleotide are next to each other on the DNA. According to the Children’s National Medical Center, these are “mutation hotspots”. (Children’s National Medical Center, 2007)

There are no measures that prevent OTC deficiency all together, however there are preventative measures that can be used to help reduce or avoid hyperammonemic episodes. Families can provide doctors with their family health history and undergo genetic testing to help the family make informed medical and personal decisions. If either parent is a carrier, testing can be done to diagnose OTC deficiency prenatally. This can help the healthcare team avoid the initial and often critical first hyperammonemic episode.

For patients that are not diagnosed prenatally but within the first few days of life, reducing the concentration of ammonia in their system rapidly is critical. This can be done by hemodialysis. Hemodialysis is a process used to clean your blood by pumping it through a special machine. The faster the ammonia level is lowered the greater the chance of avoiding severe brain damage from the buildup of ammonia in the bloodstream. In addition protein intake should be restricted, especially animal proteins as these are high in nitrogen and lead to hyperammonemic episodes. Many partial and late onset OTC deficiency patients practice a vegetarian diet to avoid the risk of elevated ammonia levels.

Another course of treatment is finding an alternate pathway for nitrogen excretion. (Lichter-Konecki U, 2013) Phenylbutyrate and oral sodium benzoate are nitrogen scavengers. They provide an alternate way for the body to dispose of nitrogen and safely take in more protein. Liver transplants are a common course of treatment as well. The transplant can prevent reoccurring hyperammonemic episodes and long term neurological effects. These are typically performed by age sixth months. Those diagnosed with partial OTC deficiency or late onset may also be liver transplant candidates if they suffer from frequent hyperammonemic episodes. (Lichter-Konecki U, 2013)

Researchers are investigating some new therapies to manage OTC deficiency. Hypothermia for neuroprotection, cooling to body down has been shown to reduce ammonia production by lowering the body’s metabolism overall. Liver cell transplant is being studied to see if I can temporarily stabilize critically patients while they are waiting for a liver transplant. Human induced pluripotent stem (iPS) cells are being considered. This therapy would use the patient’s cells to generate stem cells that can then be induced to become liver cells. Gene therapy could possibly be used to correct the disorder in the new cells and then used to for liver regeneration in the patient. (Lichter-Konecki U, 2013) These promising new approaches continue to give hope to patients and their families.

Sloas, H. A. (2013). At the intersection of toxicology, psychiatry, and genetics: a diagnosis of ornithine transcarbamylase deficiency. The American Journal of Emergency Medicine 31.9, 1420.e5.