The Ni(II) complexes [Ni(5-C5H3 R2)(X)(NHC)] 1a–f combined with MAO was tested in methylmethacrylate (MMA) polymerization. The complex 1f, bearing the bulky 2,6-diisopropenylphenyl substituents in the NHC ligand was found to be the most effective in the polymerization of MMA with TOF up to 200 h-1 resulting in a syndiotactic, high molecular weight PMMAs which can be explained by anionic, MAO-centered polymerization mechanism.

A great deal of attention is currently being paid to polymers containing polar monomers, which may give rise to new high-performance materials with high adhesion and toughness and good dyeing and moisture adsorption properties.1 Metal-based catalysts tolerant of polar functionalities, which perform homopolymerization, and if possible copolymerization with nonpolar olefins, are being sought. Late transition metal complexes look promising because of their lower oxophilicity,2 and probable tolerance against polar monomers, and against impurities in polar olefins polymerization.

Acrylates are polymerized and copolymerized for many different uses including coatings, textiles, adhesives, and paper.3 Commercial poly(methyl methacrylate) has been produced since 1927.4 Like many other polar monomers, acrylates are commonly polymerized by 18radical5 or anionic mechanisms. In addition, polymerization of acrylates with late transition metal complexes has been studied.6 Metallocene group IV complexes are known to be excellent for this type of polymerization.

Half-sandwich nickel(II) complexes with N heterocyclic carbenes (NHC) of the general formula [Ni(5-C5H4R)(X)(NHC)] (R = H or alkyl, X= Cl, Br, I) was synthesized by reacting nickelocene or its derivatives and suitable imidazolium salts . The diamagnetic property of these compounds helps in showing some C-C bond forming reactions. But, complexes 1 are very active in aryl dehalogenation and aryl amination, hydrothiolation of alkynes and oxidation of secondary alcohols as a precatalyst.

A hexane solution of n-BuLi (2.5 mL, 5.1 mmol) and a THF (5 mL) solution of 1,3-bis(1,1-dimethylbut-3-enyl) cyclopentadiene (4.83 mmol) was added and the mixture was stirred for 2 h at ambient temperature. This solution was added to the solution of [Ni(acac)2] (1.199 g, 4.67 mmol) in THF (10 mL) at −78 oC. A color change immediately from green to red is observed and a suspension of 1,3-dimesitylimidazolinium chloride [12] (1.693 g, 4.96 mmol) in THF (10 mL) was quickly added at this temperature. The reaction mixture was allowed to warm up to ambient temperature and stirred for a further 2 h. The volatiles were removed under reduced pressure. The solid residue was extracted with hexane (20 mL) and filtered through Celite. Complex 1e was isolated by crystallization as a red, microcrystalline solid.

14mg of Complex 1f(0.0255 mmol) dissolved in 15ml of toluene in a schlenk tube with a magnetic stirrer in it. To this solution, MAO ((5.10 mL, 10% wt. in toluene, 7.65 mmol) which is red in color was added by a gas tight pipette which results in a brown solution. The obtained brown solution was stirred at ambient temperature for half an hour. Now MMA(2.72 mL, 0.0255 mol) was added and the apparatus is placed in a oil bath maintaining 50oC with vigorous stirring. The reaction mixture was now quenched with excess of CH3OH (200 mL) and then filtered. PMMA was collected by filteration and washed with CH3OH and kept for over night drying. The obtained polymer is purified with small volume of CHCl3 and stirred overnight with 10% aq. HCl. The organic and the aqueous phases are separated and the organic phase is poured into excess of CH3OH. A white solid PMMA was isolated by filteration.

The selected single crystals mounted in inert oil were transferred to the cold gas stream of the diffractometer. Diffraction data was collected at 100(2) K on the Oxford Diffraction Gemini A Ultra diffractometer with graphite-monochromated Mo-K radiation. Cell refinement, data collection, data reduction and analysis were performed with the CrysAlisPRO [13]. Empirical absorption correction using spherical harmonics was applied. The structure was solved in monoclinic space group P21/c by direct methods

using the SHELXS program . It is worth noting here that the skew angle β is very close to 90â-¦. Full-matrix least-squares refinement against F2 values was carried (SHELXL-97 and OLEX2.

The series of Ni(II) complexes 1a–d and 1f (Scheme 1) was prepared from nickelocene or 1,1’ bis(allyl)nickelocene and the suitable imidazolium salt.

Complex 1e bearing the 1,3-disubstituted cyclopentadienyl ligand could not be obtained by this route. Therefore, it was synthesized form the pentamethylcyclopentadienyl 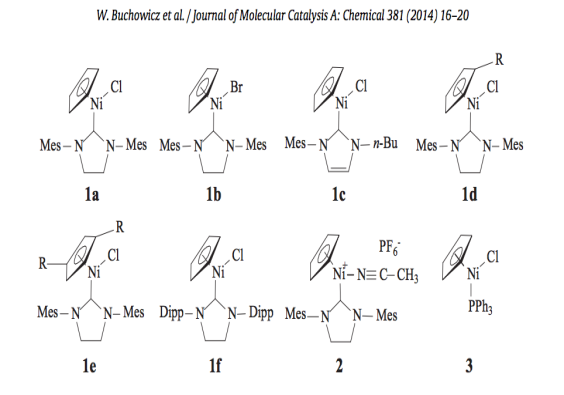 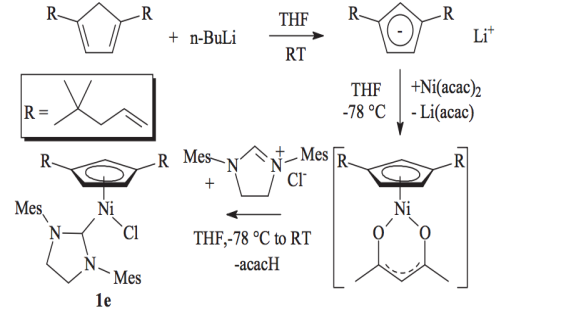 Then MMA (MMA:Ni = 1000:1) was added and the polymerization was run in a sealed Schlenk tube for 3 h at 50 â-¦C. The reaction mixture was separated as a homogenous mixture. 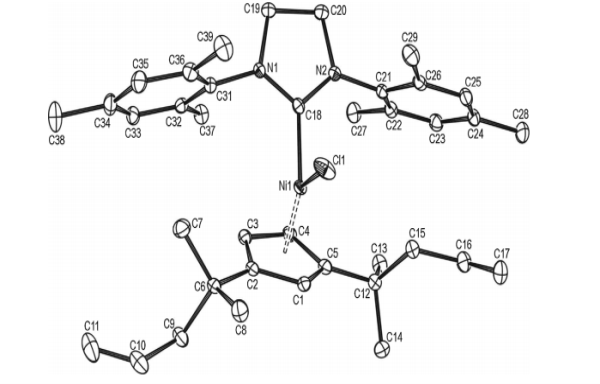 Polymerization of methyl methacrylate with complexes 1–3 and MAOa. 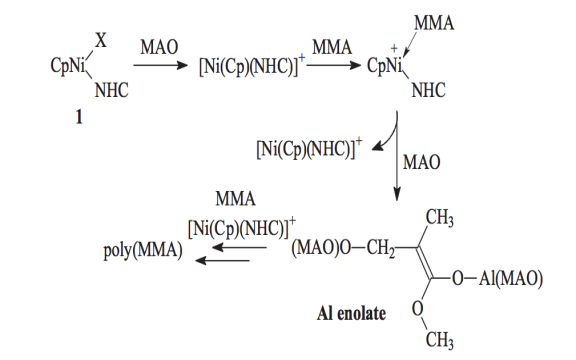 Scheme 3. Rationale for the formation of poly(methyl methacrylate) with

It can summarized that the complexes 1a-f and 2 can initiate polymerization of MMA in the presence of MAO with TOF up to 200h-1. The results of PMMA with GPC, NMR and MS imply a anionic, MAO-centered mechanism of polymerization catalyzed by Ni(II) species.