Small molecule drugs can involve in unidentified secondary targets other than its primary target in vivo1. The specific binding interactions should be studied in order to identify the potential effects on certain drugs which are administered1. The identification of secondary targets of a drug could help to solve the possible mechanism of actions which are ambiguous. The characterization and identifying the molecular functions of the off targets can be done using various techniques.

Olaparib and veliparib are used as anti-cancer drugs to treat ovarian and breast cancers. Both of these drugs are PARP (poly (ADP-ribose) polymerase) inhibitors.

In the proposal, trans-cyclooctene (TCO) tagging is used with drugs to efficiently pull down the proteins. Tetrazine beads could be used to have bioorthogonal complementary reaction. A drug Veliparib which is an inhibitor of PARP (poly ADP ribose polymerase) is used as a model system to investigate protein targets. Previous studies on drug olaparib could be used to compare with the results of this drug, velaparib and identify the most effective drug to inhibit PARP with minimum number of secondary protein targets.

The properties of these protein targets are identified and it is then compared to identify whether there is a relationship between the side effects of drugs and their molecular functions of the proteins. This characterization could lead to understand the mechanism of action of these drugs on different protein targets and can be used to develop more effective drugs. Also the development of new drugs with fewer side effects can improve the quality of the drugs.

Ovarian and breast cancers are some of widely distributed cancer types among people. These cancers are occurred due to the mutations of BRCA1 and BRCA2 human genes.5

The identification of the off target proteins can be done using two cell lines which has been used in previous studies. Ewing’s sarcoma and A2780 ovarian cancer cell lines are used because of its relation to PARP.1

The long term goal of this study will be the identification of the new potential drugs having fewer side effects for various diseases. The long term goal could be achieved by identifying the molecular functions of the secondary targets and further analysis. The short term goal would be the identification of potential anti-cancer drugs with less number of side effects. The hypothesis for the study would be that comparing the side effects with the molecular functions of the protein targets could lead to understand the mechanism of action of the drug. Further studies could be done to analyze these protein targets for different drugs. Rationale of the study can be concluded such that higher number of possible secondary targets for a certain drug could lead to more side effects. For example, if Olaparib has less number of secondary targets than that of Veliparib, then by characterizing these protein targets according to their molecular functions could tell us that there are fewer side effects for Olaparib with compared to Veliparib.

Specific aim 1: To determine the number of secondary targets of Veliparib, characterize and compare them with that of Olaparib; interpret and relate the data to identify the side effects.

The protein targets of Veliparib and Olaparib are determined using bioorthogonal approach combined with SDS-PAGE and Mass spectrometric analysis. The protein targets are then categorized according to their molecular functions and compared with side effects of the drugs. 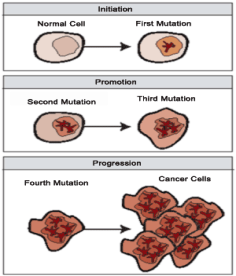 Cancer is a disease caused due to the unwanted cell growth6. This abnormal cell multiplication can cause to grow tumors and can be spread throughout the body (figure 1). The tumors can be benign or malignant due to uncontrolled spreading of these masses or lumps. Mechanism of cancers is not yet positively identified. Various drugs have been developed to treat different types of cancers.6 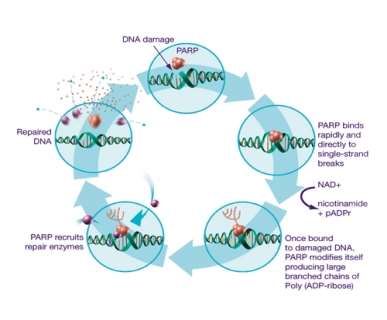 B3. Veliparib and Olaparib

Veliparib (figure 3) is a small molecule drug which is developed to treat breast and ovarian cancer. It is a PARP inhibitor. Veliparib has successfully undergone phase 1 clinical trials and currently involving in phase 2 clinical trials2. Various number of side effects are reported for Veliparib according to the studies3.

Olaparib (figure 4) is a pharmaceutical drug developed to treat ovarian and breast cancer. It is said to be inhibit PARP and involved in slowing down the growth of cancer cells. Olaparib is reported to have started its phase 3 clinical trials. Recent findings show that it has fewer side effects than the other similar drugs which are used as anti-cancer drugs involved as PARP inhibitors. 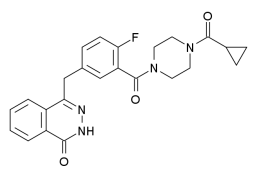 Previous studies have been done with “Olaparib”.1,4 The Weissleder group has identified possible secondary protein targets of Olaparib and has characterized them. They have done a DNA relaxation assay to identify the drug binding affinity of drug with TOP2A, an identified secondary target protein which is involved in DNA unwinding activity in transcription. The DNA unwinding activity is not affected by the drug Olaparib. Yet, it is important to do molecular function studies for other identified secondary targets to determine whether there is any correlation with side effect of the drug and molecular functions of the secondary targets.

The comparison of number of secondary targets of drug can lead to investigate the side effects of that drug. The more efficient drug would be the one with less number of secondary targets. The clinical data bases could be used to get reliable patient records for analyzing the side effects. To achieve the goal prior work should be done to identify off targets of Veliparib and Olaparib using bioorthogonal approach. Further studies could be done in vitro and in vivo to analyzed the effects of these drugs.

D1. Specific aim 1: To determine the number of secondary targets of Veliparib and compare them with that of Olparib; interpret and relate the data to identify the side effects.

The drug conjugates will be synthesized for both Olaparib and Velaparib. These drugs would contain bioorthogonal functionalities that can be used to effectively pull down the primary and secondary targets of a cell lysate. MHH-ES1 Ewing’s sarcoma and A2780 cell lines will be used here based on the previous studies.

The cleavable linker could be synthesized using tetrazine functionality for bioorthogonal pulldown of TCO-drug from cell lysates.

Bioorthogonal approach will be done to selectively pulldown the protein targets of TCO-modified Veliparib and Olaparib. Streptavidin magnetic beads decorated with synthesized cleavable linker is used for target pulldown.

SDS-PAGE analysis will be done to identify the primary and secondary targets of Veliparib and olaparib.

LC-MS/MS analysis is done to characterize the identified protein targets from cell lysates. 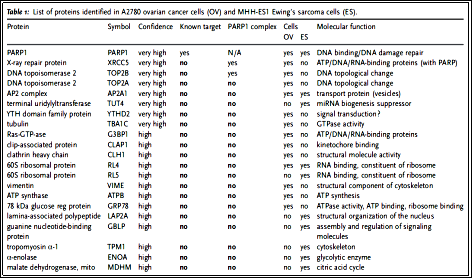 The expected results are as follows according to previous studies.1

3. Comparison of the side effects of with the molecular functions : Olaparib vs Velaparib

For both cell lines (OV and ES: refer table 1), AP2 complex and 60S ribosomal protein (RL4) will be expected to pulled down as secondary targets for both Veliparib and Olaparib. Further studies will be done to identify the effects of drugs on these proteins as a preliminary study. Relaxtion assays, immunoprecipitation assays, etc. can be done for those proteins. Then the relationship between their molecular function and side effects of the drugs could be co-related.

The side effects of a certain pharmaceutical drug can be caused due to many factors. It might not mainly due to the secondary protein targets of that drug. It might be due to alteration in physiological conditions of the biological system. The drug binding interaction with certain metal elements could be a possible factor in some diseases. The alterations in RNA and DNA binding interaction could also be lead to side effects of a drug. Therefore, understanding such changes in biological system could lead to new strategies for drug designing processes.

There are various kinds of drugs which used as PARP inhibitors. A complete set of data would be needed to identify and characterize the secondary targets of those drugs. The most effective drug for cancer treatment could be identified based on that data. The methods which have been applied to identify these protein targets could be developed for other pharmaceutical drugs as well. It will define a new approach to compare the side effect of a specific drug with molecular functions of its secondary target proteins.