Liquid chromatography coupled with MS is widely used in drug discovery and development. Mass spectrometry is a very sensitive technique and is widely regarded as having good selectivity. However, in many applications, it is necessary to isolate the target analyte from what could be a sample containing thousands of other different molecules. Typically, mass spectrometry alone is unable to meet this need as it can only differentiate compounds by their mass-to-charge ratio (m/z) which is insufficient in most practical applications of the technique. The basic principle and the elements in LC-MS technique is shown in figure 1.1.(foundation review) 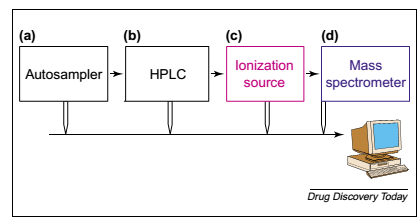 Fig. 1.1. (a)Autosampler (loads the samples onto the HPLC)

Hence, an additional separation technique is needed before presenting the sample to the mass spectrometer. Liquid chromatography-mass spectrometry (LC-MS) is the combination of two selections techniques that allows the analyte(s) of interest in highly complex mixtures to be isolated and measured. LC differentiates compounds by their physical-chemical properties and MS differentiates compounds by mass (specifically their mass-to-charge ratio). It is this dualSelectivity that makes LC-MS such a powerful analytical tool. The power of the technique is illustrated in Figure 1.2. The mass spectrometer acts not only as the “LC detector” but, at least in principle, it provides the capability to identify the species corresponding to each chromatography peak through its unique mass spectrum. Mass spectrometry (MS) has the capability to separate organic molecules according to their molecular mass and permits their detection and quantitation with extremely high sensitivity. It uses an interface that will eliminate the solvent and generate gas phase ions, transferred to the optics of the mass spectrometry (ppt) High performance liquid chromatography (HPLC) facilitates the rapid, quantitative separation of compounds from each other and from the other constituents of complex mixtures or matrices used in tandem, the two techniques (usually referred to as LC-MS) provide a unique capability for rapid, cost-effective and quantitative measurements of organic molecules for an enormous variety of applications. 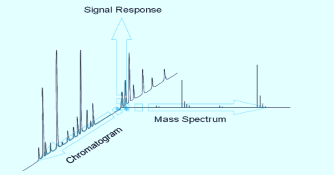 Instead, this guide aims to bring together the most relevant aspects of the subjects that need to be considered when using LC-MS for accurate and reliable quantitation, i.e. measuring precisely and accurately how much of an analyst is present in a sample. Gas chromatography-mass spectrometry (GC-MS) first introduces mass spectrometry methods to laboratory medicine about 40 years ago and provide highly specific and sensitive quantification of thermo-stable molecules below a molecular weight of about 500. The handling and maintenance of GC-MS instruments is very demanding and time-consuming. These developments suggest a more widespread use of MS techniques, superior to other analytical methods in routine laboratory medicine. The method of optimization which gives proper bioanalytical measurement is shown in dig.1.3 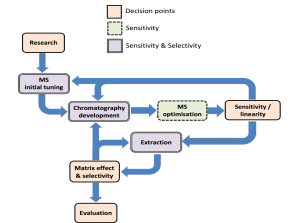 Selectivity – Combining the two separation mechanisms of LC and MS/(MSN) allow the analysis of complex mixtures. The resulting selectivity allows a particular analyte or analytes to be isolated from the mixture and gives confidence that the correct component is being measured speed. This allows fast LC analysis times and reduced sample preparation, which helps with method development and high throughput sample analysis.

Expense – Mass spectrometers that can couple to LC systems are expensive to buy and run. Regular servicing is also required, adding to the cost. The environmental conditions in the laboratory need to be well controlled to ensure system stability.

Complexity – In their own right, both LC and MS can be difficult to optimize. Combining the two leads to a complex co-dependant synergy. Sufficient training is also needed to allow analysts to run the systems effectively.

Limited dynamic range – Compared to other quantitative techniques LC-MS can have a limited range where the response is linear with respect to concentration. Typically, ranges should not exceed 500-fold concentrations.

Excessive – Selectivity In quantitative analysis, it is usual that the MS is set to only detect specific analyses. These components can cause problems with reproducible constitution and can be difficult to trace if they are not being looked for.

There are different stages in new drug discovery, from chemical synthesis to compound selection for development,as shown in fig LC–MS has become the most preferred analytical tool in many cases and it supports all the stages in the drug development. The various stages which are included in that are as follows:

In a typical arrangement, an HPLC–MS system will be used to provide information on compound identity and purity as a first step in building a discrete compound library. The MS system is to used to identity the confirmation. This process is based on a combination of HPLC–MS with software-controlled fraction collectors that are triggered on the basis of the observed or expected m/z response of the compound of interest to make the whole process highly automated.

HTS is usually performed using various fluorescence procedures to look for compounds that have the desired in vitro activity, there have been some examples where mass spectrometry has been used for this step in the new drug discovery process (for an example, see Figure4). As discussed by Falb and Jindal [26], the strategy uses mixtures of compounds plus a target protein to identify potential lead compounds for a therapy based on compounds that interact with the target protein. This high throughput screen uses HPLC–MS to identify the ligand compounds; in this case the mass spectrometry system is a TOF MS.

Perhaps the most common use for LC–MS in new drug discovery is for the various ADME studies that make up the majority of the effort provided by the drug metabolism and pharmacokinetic (DMPK) groups in their participation in the process [27–30]. As shown in Figure 3, there are several in vitro ADME screens, followed by various in vivopreclinical ADME–PK screens. These screens are almost always supported by LC–MS assays. The following sections will show examples and references for these assays.

One of the more commonly used in vitro screens is the human colon adrenocarcinoma cell line (Caco-2), which is used for the measurement of the permeability potential of a compound one of the aspects of the absorption process [31–33].There are several reports on how LC–MS can be used for the analysis of Caco-2samples [34–38]. In one example, Fung et al.[35] described a higher throughput assay for Caco-2 samples that was capable of handling 100 compounds per week, basedon HPLC–MS–MS using a triple quadrupole MS system. One of the tools required to assay this many compounds was an MS method development tool, provided as part of the software package by the instrument vendor; this tool is important for applications that require the system operator to develop discrete MS–MS transitions for each compound that is assayed. Another way in which improved the assay efficiency was by reducing the number of samples that had to be injected through the elimination of a calibration curve. The Caco-2 results for a given compound (permeability calculation) are based on the ratio of two samples,therefore, they demonstrated that the ratio of the MS responses of the two samples could be used instead of the ratio of the concentrations of the two samples, thereby eliminating the need for a calibration curve for each compound.Another higher throughput in vitroassay is the one used to assess a the potential of a compound to inhibit of oneor more of the human cytochrome P450 isoforms (CYPs);this step is important to determine a compound’s potential for drug–drug interactions [33,39,40]. In this case, the assay can be optimized to be high throughput because the analysis does not measure the compound that is being tested. There have been several reports in recent years describing how HPLC–MS–MS can be used for providing higher throughput assays to support various CYP screens for enzyme inhibition [2,41–44]. In a recent example,Peng et al. [43] described a high throughput assay based on HPLC–MS–MS to screen for five important CYP isozymes – CYP 3A4, CYP2D6, CYP2C9, CYP2C19 and CYP1A2. Their method was based on a human liver microsomal incubation of six CYP-specific probe substrates. The samples were analyzed via HPLC–MS–MS(based on a triple quadrupole MS system) using a monolithic silica rod column that allowed for a ballistic gradient and a mobile phase flow rate of 5 ml per min, and a total sample run time of 24 s. To keep the ionization source cleaner, the authors reported that for the first 12 s of the sample elution time, the column effluent was diverted to waste. This is assay based on LC–MS – divert the first 20% (or more) of the column effluent to waste so that only the portion of the chromatogram that includes the analytes is sent to the MS system.A third important in vitro screen is the metabolic stability assay. The goal of this assay is to provide a prediction of the in vivo intrinsic clearance of a compound Ansede and Thakker recently reviewed the area of metabolic stability assays and also provided a good summary of the relative importance of the major CYP isoforms for human metabolism [46]. Generally, the metabolic stability assays are based on the incubation of the compound in the presence of either human liver microsomes or human hepatocytes; in either case, the samples are typically assayed using a compound-specific analysis based on HPLC–MS–MS (usually with a triple quadrupole system). Several examples of high throughput metabolic stability assays based on LC–MS have been reported. In an early example, Korfmacher et al. [51]described an automated assay based on a single quadrupole.LC–MS system that used an automated data analysis system and could test 75 compounds per week for metabolic stability. Wring et al. [56] described a system for metabolic stability that included automated liquid handling and an LC–MS assay based on a triple quadrupole mass spectrometer that was capable of handling 50 compounds per week. More recently, Xu et al. [50] reported a highly automated system based on robotic sample preparation of the test compound plates, as well as the human liver microsomal incubations with three time points selected (5, 15 and 30 min) in addition to the time zero point. All samples were measured in triplicate to improve the reliability of the results. The assay was based on a single quadrupole LC–MS system that included an eight-probe autosampler and eight HPLC columns in a parallel mode. This system was able to assay 240 samples per hour, which enabled up to 176 test compoundsto be evaluated per day.In addition to the high throughput assay, the authors described automated data processing tools that enabled the analysis of this data in a short time frame.