Modern Techniques Used For the Evaluation of Evidences Collected In Forensic Casework: A Review

In the modern era, many technological developments have been made in the field of science as well as forensic science which stand powerful and strong to overcome the issues involved in forensic casework. In this review, three emerging techniques have been discussed that proved helpful for the forensic analysis. One of them is Stereo lithography which is being used for prototyping purposes which involves fabrication of three dimensional structures (3D modeling) for this purpose some complex mathematical measurements, biological and chemical informational data is required. At the second number, Ambient mass spectrometry (ambient MS) comes which is also a very emerging and powerful method for the identification of explosives materials even at the nanogram levels, for the analysis of pharmaceutical products (e.g. tablets), authentication of ink and document, identification of biological fluids such as urine and blood plasma and also for the testing of metabolites present in breath’s air. Third most widely used technology for glass fragments analysis is Laser Ablation Inductively Coupled Mass Spectrometry (LA-ICP-MS), even for the trace evidence collected from the criminal site.

These three powerful techniques are mentioned below:

Laser Ablation Inductively Coupled Plasma Mass Spectrometry (LA-ICP-MS): Glass elements represent a very valuable class of evidence, even in trace amount. Many other materials that present in trace amount, they are simply moved from victim to defendant and ignored very simply by the accused. While in case of broken glass particles, even minor particles can be proved very helpful to find important ways of solving the hurdle like the direction and speed of the bullets and their impact on the glass that is being analyzed(1). LA-ICP-MS is a very sensitive machine that converts the glass materials into very small size, even up to their atomic size.(2) After that the matching is done of the sample that collected from the crime site. Then the similarities are checked and make the statement about the accused person, on the basis of the evaluation of evidence, collected from a crime site. LA-ICP-MS has another application of detection of non-metals and metals, even they are traces at very minor quantity(3).

Stereo lithography: Rapid Prototyping technique that uses a laser beam to develop a sharp image of layer by solidifying or hardening of the photopolymer material(4). It develops images and specific 3D models by combining with Computer Aided Designing (CAD) that includes 3D confirmation point exchanging. In this way it helps to create images.(5) (6)

For the analysis of different evidences, different operational 3D models are available. One of them is prototyping that is a very popular and accurate model for the manufacturing of images at high levels(7). CAD plans combine with this machine to generate 3D models in layer by layer sequence.(5, 8) Laser sintering and many other imaging processes are available like stereo lithography which involves the flow or movement of photopolymers like a jet in an inkjet apparatus.(9, 10)

Ambient mass spectrometry: Ambient MS technology has been under considerations in this study, as it is the very rapidly emerging method for the identification of surface directly regardless any treatment before analyzing(11). This technology is very speedy and gives accurate results and facilitates as it involves no purification and removal of sample for the surface analysis. At Crime site many evidences present and different identification analysis are being done to study the toxicology and chemical residue concentrations. For this purpose desorption electrospray ionization (DESI)(12, 13),direct analysis in real time (DART)(14), plasma assisted desorption ionization (PADI)(15)and extractive electrospray surface ionization (EESI)(16), techniques play their important part.

LA-ICP-MS: This process is carried out by ICP-MS machine which involves three steps procedure(17), firstly the sample introduction mechanism in which the sample is being installed to the apparatus, and then the generated ions transfer into plasma and interface tube and last step involves the detection by using mass spectrometer detector.(17)MS was firstly built for the liquid sample analysis but now this technology is being used for gaseous as well as solid materials. A decade ago, solution nebulization (SN) mechanism was being used,(2, 3, 18) often for the introduction of sample into the MS machine for forensic analysis but it involved very lengthy and time consuming protocol , so to overcome this issue now a days ,sample introduction is being done by laser ablation (LA)(19-22).

To generate ions of the sample, laser beam is used that focused on the analyzing sample .After that generated ions or ablated elements are further passed out to the next chamber, termed as plasma and MS interface region, digestion and ionization processes are being carried out for the sample in it. At the third stage for the isotopic and elemental examination, the generated ions by second chamber are transferred to the mass spectrometer detector. Then MS detector collects the ions and separates them on the basis of their charge to mass ratio and builds an analysis on that base identification of the unknown samples is done.

Accordingly, solution nebulization (SN) requires high amount of sample to being analyzed even in milligrams (23-27), while some micrograms of the sample in quantity are just enough for laser ablation (LA) method. The main advantage of using laser ablation (LA) is no risk of contamination and loss of sample. Through a study, it is confirmed that laser ablation required only minimum 0.9 μg mass of sample for forensic glass analysis, while for SN system this amount range exceeded up to 500 μg to 2000 μg.

Stereo lithography: Exposure of specific lengths of radioactive rays to the liquid polymer can converted it into the solid phase very quickly in this replication based process.(28)

Ultra violet (UV) of very intensity is being fallen on the liquid layer of the photopolymer. By the UV light focusing onto the sample, some chemical changes occur that converts the liquid sample into the solid phase. This process involves the drawing of layers with the use of UV light onto the liquid sample surface(29). The conversion of liquid phase into solid phase is due to polymerization of the sample by UV light.

This technique completes its process with the combination of different computer soft wares like CAD and CAE. Different types of liquid photopolymers are currently available that are being utilized for stereo lithography.(5)

Many polymers are very strong, can resist in high temperature condition and low moisture situations. Oxygen inhibition is the big short coming that is being faced in prototyping technique by acrylates which are cured by UV rays.

With the use of cationic and polymerization,(30) the hybrids are become able to test different types of liquid samples and this test involves the use of UV light.

FDA gave approval to use some materials for these purposes are epoxy based material, rubbers and silicon like materials etc. Many other materials like nylon, polycarbonate, ABS and some type of resins are available in the market that can be used in the stereo lithography apparatus. In 1988, this system was developed for the forensic analysis.

Ambient mass spectrometry: Cooks and co-researchers developed an ambient desorption method that involves desorption and ionization of sample collected from crime site, with the help of electrospray machine. For the identification of biological samples(31, 32), environmental study(33) and to check the pharmaceuticals products validity(34), in the field of forensics very modified techniques are settled that show accurate results, one of them is DESI as shown in Figure 1.(a)(35-37).

For the chemical residues analysis as well as drugs of accused, a new approach was developed alongside the DESI termed as DART by Cody and his partners, although DESI is a very sensitive and accurate method(38).

Zenobi, a scientist settled an instrument known as EESI to ionize the materials or particles with the use of directly inserted gal with full speed into the electro spray region of the mass spectrometry apparatus, in which the desorption of particles is done by the continuous flow of gas and this method helps to analyze the liquids and other solutions(39). 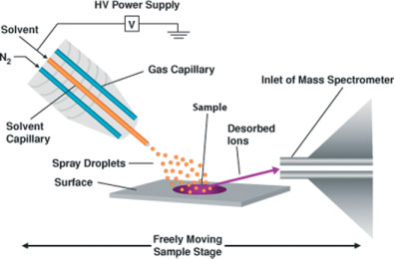 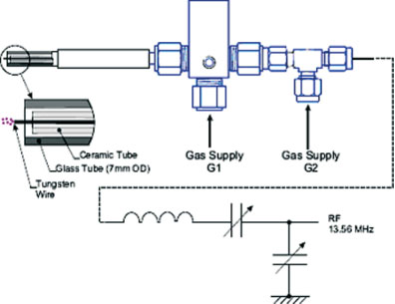 Forensic glass Analysis: Recently, FBI and other forensics groups have been involved in the usage of LA-ICP-MS as it has major application of analysis of broken glass, collected from a crime site, although this technology requires very big amount to run.

Stereo lithography: It has current issues related applications like to study the anatomy of the body shape, it’s very useful in surgeries development (e.g. orthopedic) (5).For the development of prosthetic devices , stereo lithography’s use have been increased quite prominently . MRI data analysis and identification of bone injury produced by trauma have been carried out in recent time by this method.

Ink analysis and document verification: The identification of inks used in writing of the documents or any other confidential report can prove the authenticity of the document in the law court. Ingredients of ink like organic solvents are separated using liquid chromatography and then further analyzed by mass spectrometry(34, 41).

In this article, we review the possible potential of different forensic analysis techniques for the evaluation of evidences, collected from criminal site. LA technique shows powerful potential for forensic glass analysis(42). DESI clearly illustrates the identification of biological samples, environmental study and to check the pharmaceuticals products validity(34). Stereo lithographic techniques are more precisely and accurately used for MRI data analysis(5). These emerging techniques will also play their key role to solve the issues related to forensic casework. .