Studies of Pb(II) with amino acid L-Serine and Ascorbic acid have been carried out polarographically at pH =7.30±0.01, µ=1.0M KNO3 at 25°C.Pb(II) formed 1:1:1, 1:1:2 and 1:2:1 complexes with L-Serine and used as primary ligands and L- Ascorbic acid used as secondary ligand.. The values of stability constants (log varied from 2.25 to 11.45 confirm amino acids in combination with L-Ascorbic acid, their complexes could be used against Pb(II) toxicity. The stability constants of mixed ligand complexes have been evaluated by the method of Schaap and McMasters. For the comparison of the simple and mixed-ligands complexes, the mixing constants (Km) and stabilization constants (Ks) have been measured. The positive values of the mixing constants and stabilization constants show that the ternary complexes are more stable than the binary complexes.

The L-amino acids and their compounds are used in biology, pharmacy, industry and laboratory reagent1-3. They control transamination, decarboxylation and metabolism process in human body. Mixed-ligands complexes of copper glycine with picolinic acid, quinaldinic acid, picolinic acid N-oxide, quinaldinic acid-N-oxide and with o-nitrophenol, 2,4-dinitrophenol have been carried out by D Prakash and coworkers [4-5]. The study of ternary complexes of different metal ions with amino acids and bicarboxylic acids have been carried out by Chandel et al.[6-9] On the other hand Vitamin C (L-ascorbic acid) is found naturally in a wide variety of plants and animals but not produced in human body and its only source is from diet10, L-Ascorbic acid is important drug used against cancer, scurvy and the risk of bronchitis or wheezing11-13. This drug helps the patient to strengthen the immune system. The person who suffered from AIDS has low concentration of Vitamin-C which is responsible for the formation of various body components and organs but also keeps in order the immune system14-15. Its deficiency causes anemia, dental cavities and thyroid insufficiency. It forms chelate complexes with transition metal ions16 to produce a five membered ring with the enediol part of the molecule17.

Pb(II) content is fixed in human body but whenever the concentration of Pb(II) increases, the human being suffers from severe diseases like cancer of the bladder, breast, intestine, leukemia system and sometimes death can also occur. Ascorbic acid is antioxidant alone and in combination with L-amino acids was found to be effective by increasing urinary elimination of lead. This beneficial role of Ascorbic acid was attributed to form complexes with lead18. Data suggest that some antioxidant can function as chelators and this dual benefit makes them strong candidates for treating lead poisioning19. The present study is related with the formation of binary and ternary complexes of Pb(II) with selected L-amino acids and Ascorbic acid by polarographic technique with the view that these drugs or metal complexes could be used against several severe diseases like cancer, AIDS and also metal toxicity.

All polarograms were recorded on ELICO CL 375 DC Polarograph using a saturated calomel electrode (SCE) as the reference electrode and a platinum (Pt) electrode as counter electrode. The capillary had the following characteristics m=1.96 mg/s, t = 4.10 sec/drop and h = 40 cm. The reagents Vitamin C and amino acids were of AR grade and were used as complexing agents. KCl was used as supporting electrolyte to maintain the ionic strength at 1M. Triton X-100 of 0.001% in the final solution has been used as maximum suppressor. The temperature was maintained constant at 303 K. A glass cell is used as electrolytic cell in which all the three electrodes are immersed in test solution. N2 is used to remove the dissolved oxygen. Then increasing voltage was applied to record the current and with the help of the plot between current-voltage (polarogram) the value of E1/2 is calculated.

Before the studies of mixed-ligand, complexes, the formation constants of the complexes of lead with Vitamin C and lead with amino acid L-Serine and were determined by the method of DeFord and Hume25. The results are in good agreement with the literature. The values of formation constants of simple systems are presented in Table 1. The conditions corresponded as closely as possible to those for the mixed system. The half-wave potential of Pb(II) for each series ranged between -0.389 and -0.391 volt v/s SCE.

In each case, a single well-defined wave was obtained. The plots of Ede v/s log id-i were linear with a slope of 30±2mV, showing that the two electrons reduction was reversible. The direct proportionality of the diffusion current to the mercury column indicated that the reduction was entirely diffusion controlled.

A shift in half-wave potential to more negative side with the increase in amino acid concentration was observed. This shift in half-wave potential is greater in the presence of the weaker ligand than its absence. It signified mixed-ligands complex formation. The extended Shaap and McMasters26 treatment was applied and Leden’s27 graphical extrapolation method to calculate the values of A, B, C and D. Data of calculation are given in table 2.

The stability constants ï¢11 and ï¢12 were evaluated from the two values of B. From the values of C two values of ï¢21 were obtained which are in good agreement with each other. ï¢30 is almost equal to D. The results are recorded in table 4 and the results are summarized in the form of schemes 1 and 2 where the numerical values indicate the log of the equilibrium constants.

It has been observed that as the size of amino acids increased the stability of its complexes decreased20. The stability of L-amino acids complex also depends upon the chelate ring formation and basicities of ligands21. In case of L-serine and L-threonine, the stability of the latter is less than the L-serine complex owing to the fact that electron withdrawing OH group is nearer to L-threoninate complex than L-serinate complex, causing greater repulsive forces between metal and Off group in L­-threonine complexes than L-serine complexes22. The same is evident from Pka values of L-amino acids23. In case of Vitamin-C, oxygen of enediol group may take part in bond formation with Pb(II), formed a five membered ring24. It is clear from the values of stability constant of the complexes that Vitamin-C and L-amino acids alone or in combination could be used to reduce the toxicity of Pb(II) in-vivo. One also has to consider the quantity of drugs that should not complex to the other essential metals present in-vivo and the same could be excreted easily from the body. On the other hand, the person who suffers from AIDS has low concentration of Vitamin-C, therefore his resistance can be increased by ascorbic acid therapy. 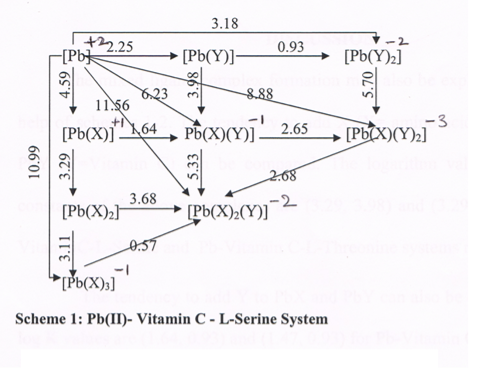 The mixed ligands complex formation may also be explained with the help of schemes 1. The tendency to add X (X= amino acids) to PbX and PbY (Y=Vitamin C) can be compared. The logarithm values of stability constants of the above complexes are 3.29 and 3.98 for Pb­-VitaminC-L-Serine.

For comparing the stabilities of simple and mixed ligand complexes, it is convenient to measure the mixing constants.

and the stabilization constants.

The tendency to form mixed-lingds complexes in solution could be expressed quantitatively in other approach compares the difference in stability (ï„ log K), which is the result from the substraction of two constants and must therefore, be a constant. This corresponds to:

Since more coordination positions are available for the bonding of the ligand [A] to a given multivalent metal ion,than for the second ligand [B].

The ï„ log K values can be obtained using the following equations:

The ï„ log K values are higher than statistical values, which again prove that the ternary complexes are more stable than expected from statistical reason.

The authors are thankful to the Head, Department of Chemistry, University of Rajasthan, Jaipur for providing facilities to carry out this research.