Miktoarm star shaped copolymers have attracted much attention due to their unique shape and intriguing properties compared to the linear block copolymers, including compact structure, higher critical micelle concentration, lower viscosity, efficient synthetic routes and wide range of morphologies. The different synthetic routes such as anionic polymerization and controlled radical polymerization have made it possible to synthesis diverse molecular architecture of copolymer and these diverse architectured copolymers give numerous morphologies. For example, Archimedean tiling patterns and cylindrical microdomains at symmetric volume fraction for miktoarm star copolymers, which have not been reported for linear block copolymers. This paper summarizes the morphology and microphase separation of miktoarm star copolymers with nonlinear architecture.

Block copolymers have attracted considerable attention because of their morphologies and nanophase structures such as spheres, cylinders, bicontinuous, and lamellae. These morphologies show due to the interacting repulsive force between the components, which particularly affected by the phase separation, which strongly depends on volume fraction of the blocks, the degree of polymerization, entropy variation with molecular weight, the Flory-Huggins interaction parameter, and the molecular architecture of the block copolymers.1–4 All of these nanostructure have been widely used in various field such as optoelectronics, microelectronics, and nanotechnology for various applications such as templates, nanoreactors, membranes, optical materials, and data storage media.5–15 6–8 In particular, in the field of pharmaceutical, vesicles of miktoarm star shaped copolymer have been used as drug delivery vehicles.

The effect of molecular architecture on miktoarm star shaped copolymers morphologies has been extensively investigated theoretically and experimentally.

In 1996, Milner 36 first reported theoretical phase diagram of AnBn miktoarm star shaped copolymers at the strong segregation limit. The morphology and microphase separation are determined by the competition between reduction of interfacial tension and the increase in stretching free energy as the copolymer blocks stretch away from the interface. 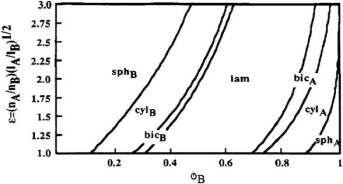 Fig 2: Phase diagram of AnBn miktoarm star shaped copolymers at the strong segregation limit as a function of volume fraction of the B monomer (φB), with increasing asymmetric parameter ε = (nA/nB)(lA/lB)1/2, where nA, nB are the numbers of A and B blocks, and lA, lB are characteristic lengths of A and B, respectively.

Fig 3: (a) The spinodal curves (χNt vs. fA) for diblock and ABn miktoarm star copolymers with three different values of n (2, 3, and 4). (b) Critical values of χNt plotted as a function of the number of arms of the B block.

In 2004, Grason and Kamien38 have calculated phase diagrams of AmBn miktoarm star copolymers for m = 1 with n = 2, 3, 4, and 5 using self consistent field theory (SCFT), but they did not consider the perforated lamellar (PL) and Fddd (O70, orthorhombic and single-network structure) phases. Later, in 2012, Matsen39 calculated the phase diagram for AB2 miktoarm star copolymer and found perforated lamellae (PL) and Fddd (O70), phases near gyroid phase (Fig 4). 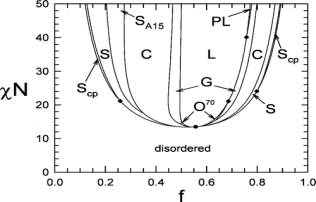 Matsushita and coworkers74–76 have investigated microphase separation of AxByCz miktoarm star terpolymers. For that they classified the molecular architecture into different series like I1.0S1.0Px1, I1.0SyP2.0, and I1.0S1.8Px2 where I = polyisoprene, S = polystyrene and P = poly (2-vinylpyridine) and 0.2≤ x ≤ 10, 1.1≤ x ≤ 2.7 and 3.2≤ x2 ≤ 53. In all the TEM images and morphologies, I domain represented by black, S domain by white and P domain by gray color.

Fig. 5 compares TEM images for the series, I1.0S1.0Px1. In figure 2(a) for the sample, I1.0S1.0P0.2, spheres of the highly minor component P are sandwiched with lamellae of two major components, I and S, which is called spheres sandwiched with lamellae. Figure 2(b) is a tiling structure as a cross-sectional view of a cylindrical structure from the sample, I1.0S1.0P0.7. This is one of the 12 Archimedean tiling structures. Figure 2(c) is a lamellar structure for the sample I1.0S1.0P3.0, where one of the lamellae is composed of other lamellae, which is called lamellae-in-lamella structure. Figure 2(d) for the sample I1.0S1.0P10 shows cylinders composed of alternating columnar I and S discs, the cylinders being packed hexagonally in a P matrix: this pattern is called a lamellae-in-cylinder structure. 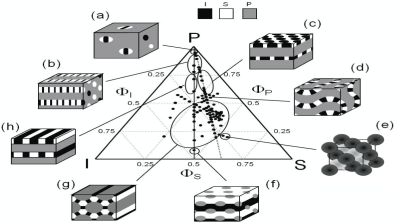