MEL is an organic compound which had been closely associated with milk adulterant scandal between the year 2007 and 2008. Having a chemical formula of C3H6N6, makes it a nitrogen rich compound, thus giving the false impression of real protein content (Y.-N. Wu, Zhao, & Li, 2009). Manufacturing companies who bought raw milk for further production usually carry out protein tests by monitoring the nitrogen levels.

MEL can be hydrolysed to ammelide, ammeline and CYA, the derivatives are many produce for the synthesis of formaldehyde resin in the manufacturing of plastics, kitchenware or laminates (Y. Wu & Zhang, 2013). CYA commonly used as a bleaching component in swimming pools. MEL and CYA are soluble in water, however when the two combined they will form a MEL and CYA complex which is an insoluble crystal through cross linking hydrogen bonding network (Mukherjee & Ren, 2010).

2.1.1 Structures and properties of MEL and analogues 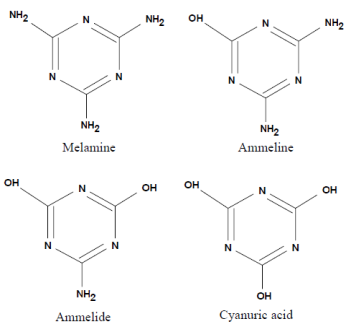 Physical properties of MEL and its analogues are shown in Table 2.1. MEL has an appearance in form of white powder with a melting point of 354oC. This shows that MEL is thermally stable and explains that it is often used as fire retardant. Furthermore, MEL is sparingly soluble in either acidic pH or polar organic solvent such as acetone or ethanol, due to like-dissolve-like interaction of polar compound MEL. On the contrary, MEL would be insoluble in non-polar solvents such as benzene or hexane (EFSA, 2010).

Ammeline on the other hand is a white powder that decomposes prior to melting. It possesses weak acidic properties and is soluble in both mineral acid and alkaline solutions. Ammelide is also a form of white powder that is almost insoluble in water. It decomposes at temperatures range of 170oC to form carbon dioxide and ammonia.

The crystal complex of MEL and CYA is very stable at only hydrolyses at either very low or high pH. Basically the complex crystal compound are insoluble at pH below 5.0, which is mostly occurred in the urinary tract (Tolleson, Diachenko, & Heller, 2008).

The toxic effects of MEL ingestion are closely linked with high dosage and low dosage of MEL would not be as toxic that will cause any adverse effect to human health. However, having said that, non toxic does not necessarily mean that it is safe for consumption.

On December 2008, the US FDA recommends a TDI for MEL was 0.63 mg kg-1 body weight per day for food and other food ingredients excluding infant milk formula (Venkatasami & Sowa, 2010). This meant 100 kg person can be subjected to a tolerable amount of 60 mg MEL. Infant formula are given a closer monitoring because it is a primary source of nutrient and calorie for infants, plus kidney functions in infant are still premature. Therefore the FDA has set a limit of 1 µg mL-1 for MEL in infant formula (Venkatasami & Sowa, 2010).

Different countries apply different limit of the TDI, for instance EFSA recommended a TDI of 0.5 mg kg-1 of body weight per day. Whereas Health Canada revealed the risk assessment of MEL-contaminated milk and milk based product to be 0.35 mg kg-1 body weight per day (WHO, 2008). Over Southeast Asia, the Malaysian Ministry of Health has set the maximum levels of MEL in baby and adult food product to be 1.0 mg kg-1, 2.5 mg kg-1 respectively (Y. Wu & Zhang, 2013). This incident cause the FDA, European community and other countries to introduce a standard limit for MEL in infant formula and in other milk products to be at 1 ppm and 2.5 ppm, respectively. WHO established the TDI for MEL at 0.2 mg kg-1 (Sun et al., 2010).

2.2.1 Toxicity in animals and humans

The study on the toxicity of MEL and CYA focuses on the urinary system for both humans and animals. The experimental studies on the effects of MEL on kidney in humans are unavailable. Nonetheless, consistent observation was made during the experiment with animals on the effects of MEL is bladder stones. The same result was reported with a following exposure to CYA, and that is formation of some bladder stones. Inflammatory reaction was observed in the rats and mice urinary bladder after dietary exposure to MEL. This indicates as one of the main effects of the toxic of MEL (Bingham et al., 2001).

In general death cause by MEL are relatively low in human but there is a high rate of stones formation. In the height of the MEL food scandal, there are many deaths of pets animals in USA, Canada and South Africa due to kidney failure. Later the Veterinary Information Network (VIN) found that the number of deaths due to MEL and CYA contaminated pet feed was in the range of 2000 to 7000 (Puschner and Reimschuessel, 2011).

In 2008 there were high detection of MEL in infant formula and other milk product and surely enough this resulted in severe health effects amongst infant and young children. As much as 294,000 were diagnosed with urinary tract stones and at least 50,000 were hospitalised. Six children were confirmed dead cause of kidney failures (Dorne et al., 2013). After this incident strict rules and regulation was implemented, and lots of method was developed in order to get a rapid and sensitive detection of MEL.

Sample preparation required prior to instrumental analysis, this is because the sample in question are high in protein and carbohydrates content which would hinder MEL detection. Therefore effective extraction methods is necessary, by removing other constituents in the matrix would mean lower limit of detection (LODs) can be achieved.

Due to the polarity MEL compound it is best to extract it using SPE with a polar cartridge. The most common SPE tubes used for the separation of MEL is Supelco Discovery DSC-SCX 500 mg/6 ml (Sigma-Aldrich, n.d.). Before the SPE methods are applied it is best to precipitate out the protein by adding acetonitrile which acts as a protein precipitant and then centrifuge (Mosch, Kiranoglu, Fromme, & Völkel, 2010).

GC-MS is often used to detect MEL and its analogs for quantification and confirmation. It was reported that it is a sensitive, reliable instrumental analytical method for the simultaneous detection and quantification of MEL in animal feed. However, it requires a tedious sample preparation which renders the methodology impractical for analysing large samples (Venkatasami & Sowa, 2010).

HPLC is known as common method for quantitative determination of MEL. It can carry out simultaneous detection of MEL, ammeline, ammelide and CYA with LOD of 5 ppm. By current standards, this method of analysis does not show great sensitivity in detection of MEL. This is because UV of MEL exhibits absorption bands below 250 nm which meant that HPLC method will not be able to confirm the target analyte (Sun et al., 2010). 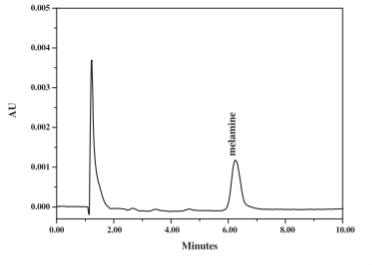 Quantification error can occur if insufficient attention is given to chromatographic conditions or if sample preparation is not optimised. To increase sensitivity investigators used DAD system of detection, this gives improvement in term of better LOD of 0.1 ppm using HPLC-DAD (Sun et al., 2010). It is difficult to retain MEL on a reverse phase column due to it high polarity, so to compensate for this problem hydrophilic interaction chromatography technique is used (Han et al., 2011).

MS techniques are widely used for the determination of contaminants of MEL, because it shows molecular specificity and high sensitivity of detection. This means a MEL AND CYA having fairly low LOD 30 ppb and LOQ 40 ppb in serum sample. Mostly the method based on LC-MS2 with HILIC and ESI is positive ion mode. Positive ion mode is chosen because of the presence of nitrogen in the compound. 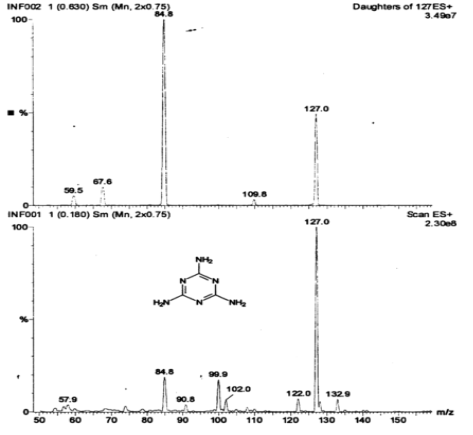 The past researcher used two selected reaction monitoring (SRM) transitions of m/z 127 till 85 and 127 till 68 were monitored, figure 2.3.3. By applying these ion transitions for SRM allows quantitative and qualitative analysis of MEL residues at an LOD of 3.2 ppb (Sun et al., 2010). 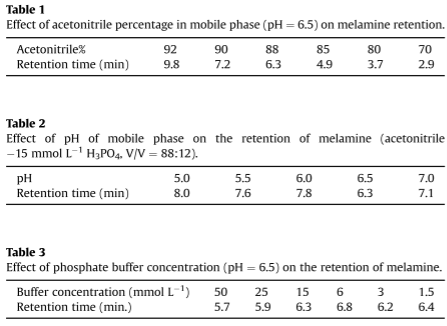 Factors of affecting retention of melamine were explored, including buffer concentration, pH, and percentage of organic solvent in the mobile phase. The optimal UV detection wavelength was selected. Satisfactory retention of melamine, good peak shape, and high sensitivity were obtained under the chosen conditions.