Cancer in general is referred to body cells that grows rapidly and over the limit of normal cells (Hayflick limit). There’s over 200 different types of cancer, where some cancer cells can spread to other parts of the body leading to further complications. It’s one of the biggest leading cause of death worldwide. Therefore interest in finding treatment and prevention for this disease has been growing. One of the most successful chemotherapy drugs is Melphalan. It’s been over 50 years in use and there’s an increase in research to improve this drug. It’s indicated for different type of cancer: for the analgesic treatment of multiple myeloma (MM) and for the alleviation of unresectable epithelial tumor of the ovary. It has also been used alone or in combination with other chemotherapy drugs for relief treatment of locally repeated or unresectable in-transit metastatic melanoma of the extremities. It’s also used in addition to other drugs or surgery in breast cancer.

Melphalan belong to a class of chemotherapy drugs called nitrogen mustardalkylating agents. It’s the oldest class of anticancer drugs still frequently used. It’s a bifunctional alkylating agent which means it has two sites where the reactivity occurs. It displaces the chloride ion by amine nitrogen to form a cyclic amine ion (aziridinium ring) by intramolecular nucleophilic attack. Afterwards the DNA nucleophile undergoes a nucleophilic attack and opens the azidrine ring, which leads to the alkylation of DNA. The lone pair of electrons on the nitrogen in the drug will then be regenerated when the azidine ring cleaves. The same reactions happen on the second reactive site of the drug, by displacing the second chloride ion. (picture) This will lead to cross-linked DNA molecules through covalent bonds. The covalent bonds can be made in two different ways: either on the same DNA strand which will alter the shape permanently prevents other enzymes or molecules from binding to it, or on adjacent strand therefore preventing replication/transcription process. (picture) The reaction happens in the N7-site of guanine, which is the most preferred nuclei acid. However the reaction can also take place at the N3-site of adenine. The alkylation of the nucleotide leads to miscoding of DNA as for example Thymine will bind to guanine instead cytosine. Due to the p-orbital of the benzene ring in melphalan that draws the lone pair electrons from nitrogen, this leads to reduction of reactivity to form the azirdine, hence only strong nucleophiles such as guanine will react with it. This has the benefit of reducing the side reactions with water, tissue and blood, leading to the drug can be given orally. The side chain of Melphalan is L-phenylalanine, meaning it has a component that act as the amino acid phenylalanine. (picture) Consequently the drug is most likely to be recognised as an amino acid, and it will be taken into the cell by transporter protein. This increases the stability of the drug further.

Despite Melphalan being used as an anticancer drug for over 50 years, it’s associated with many complications including poor solubility in water, variable bioavailability and rapid hydrolysis at physiological pH (11-14) which also increase the bioavailability problem. Another major problem is its rapid clearance from the blood circulation due to its short half-life (90 min). A study conducted in USA to tackle these difficulties by adding a poly ethylene glycol (PEG) to the Mel, in order to enhance the formulation of parental and oral administration. PEG is a synthetic polymer which is water soluble and non-ionic. It is an amphipilic polymer meaning it has an exceptional capacity to be soluble in both aqueous and organic solvents. This property makes it ideal for chemical conjugate of substance that has a biological effect. Another advantage of using PEG is it has exceptionally low level of antigenicity and immunogenicity. The process of conjugation is called PEGylation. It’s a two-step process where in the first step the activation and derivatization of PEG occurs with appropriate functional groups. In step two the conjugation of the activated PEG with Mel occurs. The NH2 group in melphalan undergoes a nucleophilic reaction with mPEG-succinimidyl propionate (mPEG-SPA) under the presence of DMAP catalyst. This reaction produces an amide bond, which is reasonably stable. The mPEG-SPA gets hydrolysed to mPEG and N-hydroxysuccinimide. Fig x.

The study conjugated two molecular weight (MW) PEG: 2000 and 5000 Da. Variable test were conducted to measure the difference between the two different MW PEG conjugates and the parent drug Melphalan. The aqueous solubility of the conjugated Melphalan was measured by dissolution test, the results are shown in table 1. The table shows there is an increase in aqueous solubility of MpPEG-2000 by nearly 80 times reading as 7.2±0.12 µg/ml and increased by approximately 123 times for MpPEG-5000 reading as 11.07±0.8 µg/ml, compared to the measured solubility of the parental Melphalan of 0.09 µg/ml. This results can be explained due to the PEG chain being attached to the drug. On the other hand the haemolytic activity of melphalan versus its conjugates was also determined by assessing the haemoglobin content. The melphalan haemolytic activity was measured to 100% above the concentration 3.5 µg/ml (table 2). With regards to MpPEG-5000 only 48.8±1.5% haemolysis observed at concentration of 32 µg/ml (table 3). In case of MpPEG-2000 the highest percentage of haemolysis of 81.3±0.5% was recorded at concentration of 32 µg/ml (table 4). The lower haemolytic activity of the conjugates compared to melphalan might be due to the dominated property of polymeric carrier PEG. These results is an indication that the chain length of PEG plays an important role on the haemolytic activity. The property of delaying haemolysis is better in MpPEG-5000 compared to MpPEG-2000 even at higher concentrations. It also has an effect on the aqueous solubility due to the longer the chain the more hydrophilic backbone of PEG will be present. The percentage cumulative hydrolysis of the conjugates was observed in case of MpPEG-2000 to be 10.11±0.68 after 6 hours, whereas for MpPEG-5000 was only 5.21±1.2% after the same time (table 5). The low cumulative hydrolysis detected in MpPEG-5000 may be understood due to the ester linkage being protected by the PEG molecule due to the steric hindrance. Furthermore the amide bond is more protected in MpPEG-5000 compared to MpPEG-2000 due to the shielding effect of the larger chain of PEG. Therefore the MpPEG-5000 can be an ideal candidate to provide a slow release drug formulation. Thus, increase the half-life of the drug and decrease the clearance. 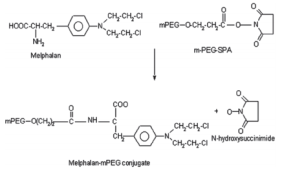 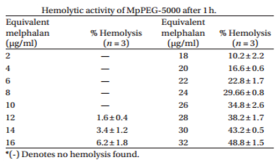 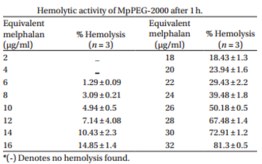 This drug adds a small group, an alkyl group to the DNA to alter its structure and hence modifies the function.

It’s an alkylating agent which means it adds an alkyl group to DNA.

The alkyl group may be transferred as an alkylcarbocation, afree radical, acarbanionor acarbene(or their equivalents).

Nitrogen mustards (NMs) form cyclic aminium ions (aziridinium rings) by intramolecular displacement of the chloride by the amine nitrogen. This aziridinium group then alkylates DNA once it is attacked by the N-7 nucleophilic center on the guanine base. A second attack after the displacement of the second chlorine forms the second alkylation step that results in the formation of interstrand cross-links (ICLs) as it was shown in the early 1960s. At that time it was proposed that the ICLs were formed between N-7 atom of guanine residue in a 5’-d(GC) sequence.[15][16] These kinds of lesions are effective at forcing the cell to undergo apoptosis via p53, a protein which scans the genome for defects. Note that the alkylating damage itself is not cytotoxic and does not directly cause cell death.

For the analgesic treatment of multiple myeloma and for the palliation of non-resectable epithelial carcinoma of the ovary. Has also been used alone or as part of various chemotherapeutic regimens as an addition to surgery in the treatment of breast cancer, alone or in combination regimens for palliative treatment of locally recurrent or unresectable in-transit metastatic melanoma of the extremities, as well as for the treatment of amyloidosis with prednisone. 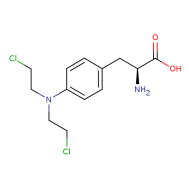