One of the most important events of 1856 was the discovery of the first successful artificial dye, mauveine (aniline purple, mauve dye, Tyrian purple) by William Perkin. The discovery of mauveine led to rapidly growth of fashion trend and discovery of new synthetic dyes. Nowadays there are more than three million dyes (WordPress.com). Most dyes used back in the XIX century were derived from natural products such as animals, vegetables or minerals. The dyes made from natural products at that time were expensive and required a large amount of labour. The main disadvantage of natural dyes was their tendency to fade.

In 1834, German chemist August Wilhem Hofmann was working derivatives of coal tar to produce a quinine substance for treatment of malaria. At that time, young William Perkin was one of the Hofmann’s assistants and embarked to solve this problem. In 1856, while Hofmann went back to visit Germany, Perkin conducted some experiments in the laboratory at his home to achieve Hofmann’s goal. Perkin oxidised the aniline in the presence of potassium dichromate and obtained black coloured sludge. At the end of the experiment Perkin diluted the black sludge with alcohol and gained a purple solution. Perkin patented his new discovery and established the company ‘Perkin and Sons’. In June 1857 the company ‘Perkin and Sons’ began its work producing synthetic dyes.

It should be emphasized that many technical problems occurred during the operation of the company such as large scale of benzene nitration and nitrobenzene reduction. The aniline purple was obtained in poor yields, because the oxidation step required optimisation.

By 1864, the company was able to trade its product as a crystalline solid. In spite of the wealth which came with successful dye production, Perkin continued his experimental works in chemistry. After his successful introduction of aniline purple in Britain, next step for Perkin was to export mauveine abroad. However, Perkin’s effort to introduce his invention in France ended unsuccessfully as his patent was invalidated. Invention of the Perkins aniline purpleencouraged other chemists to work on new synthetic dyes. For instance, in 1856 Natanson discovered magenta (triphenylmethane dye) by oxidising aniline with chloride. As it was mentioned above, developments of synthetic dye chemistry in modern times takes its background from mauveine. Taking the historical background into consideration, mauveine made our world more colorful than it was before(‘the chemistry and application of dyes’, edited by David R. Waring, and Geoffrey Hallas, Plenum Press, New York 1990, page 4-5).

The structure and consist of mauveine for many years had remained mystery. First attempts establishing mauveine molecular structure was made by Perkin himself. Perkin derived similar dye when oxidised toluidine and xylidine. However, pure aniline gave dye with poorer quality than that obtained from original impure aniline. This product was called pseudomauveine which was derivative of mauveine

) and a trimethyl derivative. At that time Perkin could not determine every atom in the molecule and so he attempted to determine mauveines constitutional formula by identified properties of mauve. In 1879 Perkin came to conclusion that mauveine can be derived only from aniline and para-toluidine. It should be emphasized that Perkins work determined a molecular formula of mauveine but not a molecular structure. Other works to determine molecular structure of mauveine was done by Fischer, Hepp and Nietzki. By synthesising pseudo-mauveine in several times they discovered pseudomauveines structure. Oxidative couplings were involved in this synthesis as shown in figure 1. 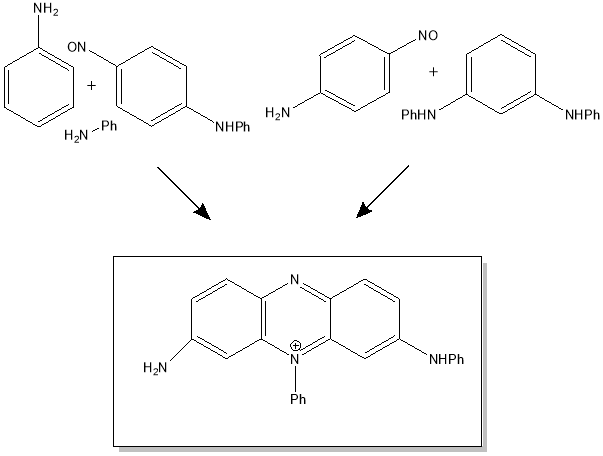 However, there was little evidence to proof mauveines chemical structure (figure 2). 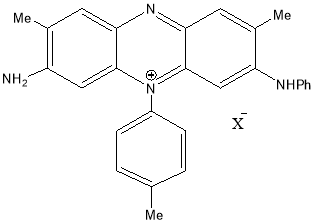 Table1. Percentage of chronophers which found from mauveine samples

As it was mentioned above, the mauveine contained pseudo-mauveine, which is very soluble, uncrystallisable salt and another one is less soluble, crystalline salt

obtained from para-toluidine and aniline. One of the important properties of mauveine is fastness with silk which they colour.

As mentioned in previous sections William Perkin did not discover the mauveine intentionally, his main aim was preparing quinine (

). As chemistry were in the early stage of its development there were little known about quinines structural formula. Taking into account of the molecular formulas of quinine and allyl toluidine Perkin came to the relationship shown in equation 1 and he attempted the preparation of quinine by oxidising allyl toluidine in the presence of potassium dichromate in sulphuric acid:

In his note Perkin wrote ‘that no quinine was formed, but only a dirty reddish brown precipitate’.

However, Perkin was not aware at that time structure of allyl toluidine and quinine. If he had known the structure, he would certainly choose other route for synthesising quinine: 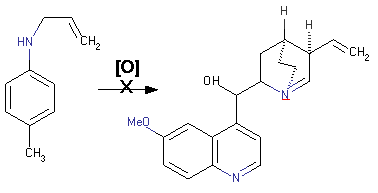 Alcoholic extract of mauveine gives very brilliant purple colour which cannot be removed and stable during washing. Perkin quickly considered its potential as a dyestuff for textiles and fabrics.

Another useful application of mauveine is food colouring dye. In United States during 1900th the mauveine was used as food colouring with different names such as violate paste, rosolan, Perkin’s violate.

This short essay has considered history of the mauveine discovery, chemical structure and properties, synthesising way of mauveine. The discovery of mauveine led to rapidly change in global fashion and chemical industry. The Perkins discovery cannot be judged by today’s knowledge and consider as a luck. There were many things which have been discovered and invented, however they were forgotten as it did not find any practical application. Perkin had the ability to combine the theoretical and practical work from his experiment. Perkin’s discovery still has not lost its significance in modern synthetic dye chemistry and contributed to development of modern fashion. 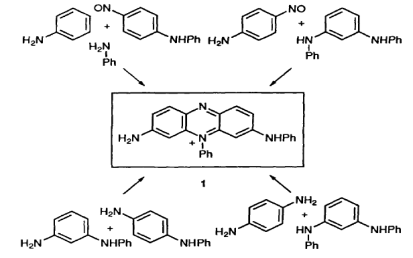 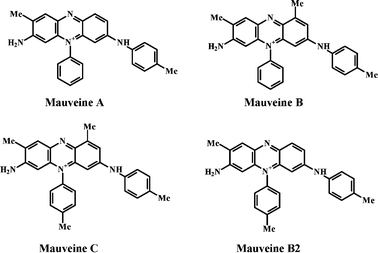