Mark Ratner and The Basis of the Future: Molecular Electronics

Mark Ratner, He is professor of chemistry and professor of materials science and engineering at Northwestern University. He studies the theory of fundamental chemical processes related to nanoscale application. Ratner is a member of the Internatioanal Academy of Quantum Molecular Science also, His lectures subjects were “Transport in molecular Junctions”and “Nano and Energy” at Stanfort University at 2009. I choose Mark Ratner because, Topic of Nano technology and energy generation are important on the sustainable energy. High capaticy batteries, high technology solar cells, etc. besides; new tech-power plants or storages… These topics to be studied for me. In short, Quantum mechanics and Nano technology are always interested me[20].

He graduated from Harvard University department of chemistry at 1964. Then, He started Ph.D. in chemistry from Nortwestern University and working with G. Ludwig hofaker. Ratner first lecture chemistry at New York University from 1970 until 1974…[20]

He worked may extended period of time in israel and he worked with lots of scientists, including form Tel Aviv University and University of Jesursalem. Also Rater works international association, particularly in Netherlands and Denmark…[20]

Molecular electronics increased interest in as of late, induced spawning by information technology may reach it computability limits in a several years. [1-2]. In order to molecular electronics to become a valued alternative to silicon researces, It will not be enough to generated molecular electronic devices with distinguished characteristics, but proper circuit and architectural solution will be needed. When lots of effort has given to the demonstration of electronic functionalities of one molecules and organic filmsi research at the circuit and system level is still in its beginning[5-9]. Investigation on single molecules or nanotube based devices prospect to keep Moore’s law alive once miniaturisation of silicon-based structures becomes useless. As first proposed by Aviram and Ratner [10]. One can imagine to squeeze whole nonlinear circuit elements such as transistors or diodes into single molecules. In principle, suchlike devices could be importantly faster and smaller than end of the routemap solid state electron devices[11]. 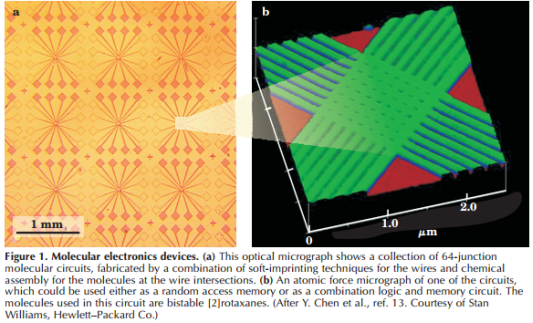 The molecule electrode interface is a severely significant component of a molecular junction. It might limit current flow or completely modify the measured electrical response of the junction. Lots of experimental platforms for constructiong molecular electronic devices are founded on practical comsideration. This approach is in numerous ways the boon and the disaster of the field. For instance, the sulfur gold bond is a fabulous chemical hangle for forming self assembled, forceful organic monolayers on metal surfaces.

Other technics such as using a scanning probe tip a cÄ±ntact the molecule are frequently employed in part. Becuse that avoid processing steps that can damage or unexpecteably modify the molecular component. Optimally the couice of electrode materials would be based not on the easy of production or measurement, but rather on first principles considerations of molecule electrode interactions. On the other hand, in state of the art for the theory of molecule electrode interfaces is very elemantary. 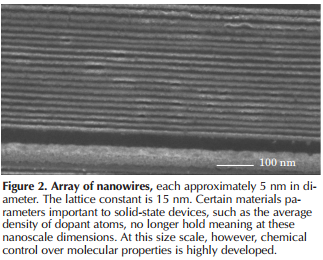 Consider a protein that spans a cell membrane and shuttles information across that membrane. The protein self assembles and self orients in the membrane; it also might switch between two forms, only one of that will transmit the chemicalsignal. Proteins are big molecues and indeed a specific molecular size is required to achieve such a rich combination of properties. The rotaxane molecule shown large and comples, but it is indeed efficiently and small designed, given the set of mechanical, chemical, and electronic properties that have been built into it[16].

Quite likely, transport in DNA junctions will show that the molecule or at least naturally occuring DNA is actually a wide bandgap semiconductor characterized by localized hole hopping between the low energy guanine cytosine pairs. Also guanin yields the most stable positive ion. Because the band gap is wide, DNA seems colourless and long range coherent charge motion is improbable[17].

The potential of chemical synthesis to design specific and maybe even useful device behaviors is rapidly being realised. The following question, what sorts of circuit architectures can most take advantage of molecular electronics, is nowadays receiving rather a bit of attention both from computer scientists and from researchers; progress towerd indentifying and constructing working molecular electronics circutry has advanced fastly[13].

The primary challenges of realizing a true molecular electronics technology are wintry. Controlled fabriaction to within specified tolerances and its expermental verification is a exclusive problem. Self assembly schemes based on molecular recognition will be viral for that work. Absolutely reproducible measurments of junction conductance are only beginning in laboratories at Cornell, Harvard, Delft, Purdue and karlsruhe Universities and at the Naval research laboratory and same centers.

A lot of the technology targets of molecular electronics, such as the computational applications duscussed, should perhaps be viewed as drivers for steering the field forward and for defining the critical and rate limiting challenges that must be overcome[14].

Molecular conductance junction are structures in that unimolecules or minor groups of molecules conduct electrical current between one than one electrodes In such junctions, the linkage between the molecule and the electrodes very affects the current boltage characteristics. Considering theoretical and several experimental advances, including the understanding of basic systems, there is still limited correspondence between theoretical and experimental studies of these systems[18].

Over the past twenty years, organic materials gave been extremly investigated by countless research groups for implementation in organic photo voltaic(OPV) devices. The organic semi conductors is protrusive by their potential low cost and facile tunability, making organic photovoltaic devices a knowledfe gap in our common understanding of materials, so boyh the time scale and lenght scale (fento to microsecond and nano to micrometer) proper to OPV functionality occupy a challenging a impressive space between the traditional regimes of quantum mechanics and solid state physics[19].

Ratner lead up lots of field, research centre and laboratories foremost; International Business Machines (IBM) and The defense Advanced Research Projects Agency (DARPA). Also, He described his experiences as an organizing member; a member of the board of directors and being on steering and selectrion committee. The significance of gaving a staff at research centre and proposal some thoughts on the future nanotechnology. Once for all, Ratner have a part in many today’s technology

[14] A. DeHon, in Proc. First Workshop on Non-Silicon Computation, available at http://www.cs.caltech.edu/research/ic/ pdf/molecular_nsc2002.pdf