Monosaccharides are the most basic unit of carbohydrates, playing an essential role in the biochemistry of life. The most important and commonly occurring form is glucose, used as an energy source in cells (Solomon et al., 2011). Monosaccharides have the chemical formula (CH2O)n (where n

3) but those with eight or more carbons are uncommon due to their inherent instability (Solomon et al., 2011; McMurry, 2008). In a monosaccharide molecule, each carbon atom has a hydroxyl group bonded to it, except one which has an oxygen atom double bonded to it instead thus forming a carbonyl group (Solomon et al., 2011). The monosaccharide is an aldehyde if the carbonyl group is located at the end of the chain, and a ketone if the carbonyl group is located at any other position. Monosaccharides can exist in acyclic or cyclic forms, and usually switch between the two forms (McMurry, 2008). The Kiliani-Fischer synthesis is a technique for lengthening these important biomolecules.

Figure 1 below shows the reaction equation of the technique. A starting sugar is first reacted with sodium cyanide to form cyanohydrin, and subsequently hydrolysed through the application of heat to form two diastereomeric aldonic acid lactone intermediates. These intermediates are later separated through separation techniques, such as chromatography, and the desired lactone is reduced using a sodium amalgam to form a resultant sugar that has one carbon atom more than the starting sugar. In this written review, the starting sugar will be a aldopentose and the resultant sugar will be a aldohexose.

The first step in Kiliani-Fischer synthesis involves nucleophilic addition of the starting sugar, an aldehyde. NaCN and H2O are used as reagents (McMurry, 2008). Figure 2 below shows the mechanism of the reaction. A lone pair on a CN– ion initiates the reaction by attacking the nucleophilic carbon atom at the carbonyl group, forming a tetrahedral intermediate. The O– then attacks the H atom of a H2O molecule, forming a cyanohydrin.

The second step in Kiliani-Fischer synthesis involves the hydrolysis of the cyanohydrin to form aldonic acid (McMurry, 2008). H2O is used as the reagent, with heat applied. Figure 3 below shows the mechanism of the reaction. The lone pair on the O of OH–, formed by the auto-ionization of water, attacks the nucleophilic C of the cyanohydrin forming a trigonal planar structure. The lone pair on the N then attacks an H of a H2O molecule, followed by the double bond of C=N attacking the H atom bonded to the OH group. The resultant molecule is an amide. An OH– ion then attacks the nucleophilic carbon at the carbonyl group, forming a tetrahedral intermediate that collapses with NH2 leaving as a leaving group. An aldonic acid molecule is formed.

Finally, the lactone intermediate is reduced using a sodium amalgam, Na(Hg), to form the resultant aldohexose monosaccharide (McMurry, 2008). Reagents used are sodium amalgam and sulphuric acid, in cold solution (Fischer, 1890). Figure 5 below shows the reaction equation. The exact mechanism of reduction by sodium amalgam is unknown at this point in time (Keck et al., 1994). 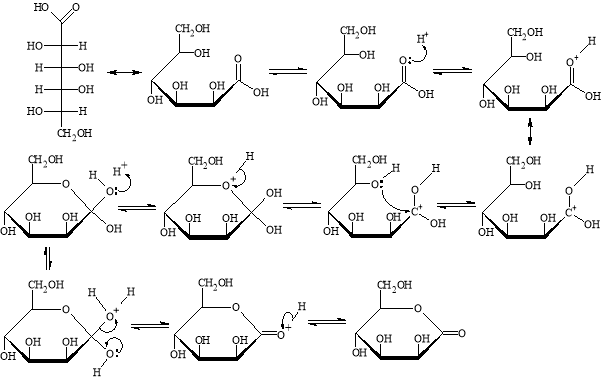 The Kiliani-Fischer synthesis is named after German chemists Heinrich Kiliani and Hermann Emil Fischer. Its original purpose was to elucidate all 16 stereoisomers of aldohexoses, as achieved by Fischer. Key discoveries that to the development of this technique included: (1) Louis Pasteur’s insight that the “molecule of tartaric acid came in two forms that were mirror images”, or isomers, of one another, and that each of these isomers rotated polarized light in different directions (Wagner, 2004, p.240), (2) Jacobus H. van’t Hoff’s and J. A. Le Bel’s insight of the “concept of an asymmetric carbon atom”, that isomers of compounds exist despite identical chemical formulae because of asymmetric carbon atoms, and the relationship between stereochemistry and optical activity (Wagner, 2004, p.240), and (3) Fischer’s creation of phenylhydrazine, a reagent that reacts with sugar molecules to form osazones.

Prior to the discovery of this technique, relatively little was known about the structural properties of monosaccharides. It was difficult to study monosaccharides because of their “tendency to form syrups rather than solids that could be dissolved and crystallized easily” (Wagner, 2004). However, Fischer discovered phenylhydrazine which when reacted with aldonic acids (formed by oxidation of sugars) forms osazones (Kunz, 2002). These carbohydrate derivatives could be isolated easily through crystallization, and had physical forms that could be distinguished from one another (Kunz, 2002). Their subsequent analysis allowed Fischer to identify and segregate isomers of the monosaccharides (Wagner, 2004). The aldonic acid can be regenerated by addition of baryta water, or aqueous solution of barium hydroxide, to the segregated osazone (Fischer, 1890). The then purified aldonic acid can be evaporated to transform into welling-crystallizing lactone for further study (Fischer, 1890).

In 1886, Kiliani discovered a method to lengthen the carbon chain of an organic molecule, using cyanide as a reagent to form cyanohydrin (McMurry, 2012). Fischer realized the potential of this discovery in advancing the study of carbohydrates, adding on an additional step to convert the cyanohydrin nitrile group into an aldehyde (McMurry, 2012). Thus, the Kiliani-Fischer synthesis was created. This new technique allowed Fischer to research further into the stereoisomerism of monosaccharides and continue off where he last stopped – that D-glucose and D-mannose were stereoisomers but of unknown structures.

Figure 5 on the right shows the general structure of a aldohexose. In order to apply the Kiliani-Fischer synthesis in the elucidation of aldohexose stereoisomers, Fischer had to first make a starting assumption that the –OH group of D-glucose at C5 was on the right side (Wagner, 2004).

Finally, Fischer found that oxidizing D-gulose resulted in the same dicarboxylic acid as that of D-glucose (Wagner, 2004). Through logic, Fischer realized this implied that the –OH group at C2 in D-glucose must be on the right side. 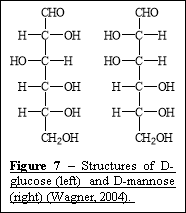 Piecing together all the information, Fischer finally determined the exact structure of D-glucose and D-mannose, as shown in Figure 7 below.

An improvement to this method would be to reduce the nitrile over a palladium catalyst (Serianni et al., 1979; McMurry, 2012). This would yield an imine intermediate instead, that can be hydrolysed to an aldehyde.