Molybdenum carbonyl phosphine complexes with the general formula, [Mo(CO)4L2] where (L=PR3; R=Me, Ph etc) have an octahedral geometry. This means the complexes are able to display either cis or trans stereochemistry. Interconversion between the two isomeric forms is enabled through thermal Mo-P bond cleavage. Only the thermodynamically stable isomer of [Mo(CO)4(PPh3)2] is formed by direct reaction of Mo(CO)6 and PPh3. So in order to isolate both isomeric forms of the complex, [Mo(CO)4(piperidine)2] is used as an intermediate.

The aim of this experiment was:

A summary of the preparative details for the formation of [Mo(CO)4(piperidine)2] is detailed in table 1.1

Table 1.1 The preparative details of [Mo(CO)4(piperidine)2]

In order to calculate the yield of [Mo(CO)4(piperidine)2] formed, the following method was employed, with details summarised in table 1.2.

Table 1.2 The yields for the formation of [Mo(CO)4(piperidine)2]

The theoretical mass of [Mo(CO)4(piperidine)2] was calculated from its molar mass and the number of moles of the limiting reagent, Mo(CO)6 , using the following equation eq.1.1

As before using eq.1.1 and eq.1.2 the percentage yield was calculated from the theoretical yield. However in this case the limiting reagent was found to be [Mo(CO)4(piperidine)2]

Since isomer A was produced in a relatively low yield, the thermal isomerisation reaction was scaled so that only 0.4 g of isomer A was used.

As before using eq.1.1 and eq.1.2 the percentage yield was calculated from the theoretical yield.

This experiment involved the isolation of the two geometrical isomers of [Mo(CO)4(PPh3)2]. Only one of these isomers can be isolated from the direct reaction of PPh3 with [Mo(CO)6]. This reaction requires a long reaction time and high temperatures but yields the more thermodynamically stable geometrical isomer. So in order to isolate the isomer B, an alternative synthetic route was employed. A precursor in the form of [Mo(CO)4(piperidine)2] was used to yield isomer B, since PPh3 is now able to readily substitute piperidine. This method relies on the nature of the ligands. Piperidine is a weak field ligand, and so forms a relatively weak dative bond with the molybdenum ion. However, PPh3 is a strong field ligand and so binds strongly with the central metal ion. This means PPh3 easily displaces the piperidine ligands to give rise to the isomer B form of the complex [Mo(CO)4(PPh3)2].

The first part of the reaction involved the preparation of the intermediate [Mo(CO)4(piperidine)2] which is a yellow solid which is in agreement with literature. The complex was formed in good yield at 83%. The infrared spectrum of [Mo(CO)4(piperidine)2] shows four peaks corresponding to C=O vibrations at 2011.73, 1877.24, 1756.58 and 1706.11 cm-1 (lit). This suggests the isomer of the complex formed is the cis geometrical isomer. This can be explained by employing a group theory technique, which uses an unshifted C=O bonds procedure, as illustrated in figure.

Cis-[Mo(CO)4(piperidine)2] has C2V symmetry and the irreducible representation of unshifted bonds is deduced to be 2A1 + B1 + B2. Since all of these operations are IR active, four peaks are expected in the carbonyl region of the spectrum.

In the IR spectrum there is also a peak at 3250.88 which corresponds to an N-H bond. This is indicative of unreacted piperidine. The presence of residual piperidine did not negatively affect the experiment to any significant extent.

The synthesis of [Mo(CO)4(PPh3)2] (isomer A) yielded a pale yellow solid as reported by. The complex produced a 44% yield which affected the proceedings of the reaction as enough product was not formed. This meant the subsequent reaction had to be scaled down. The IR spectrum of [Mo(CO)4(PPh3)2] (isomer A) displayed four peaks in the carbonyl region at 2011.26, 1876.74, 1756.04 and 1706.81 cm-1 which were similar to those reported in the literature. The compound was also determined to have C2V symmetry which would therefore be expected to give rise to 4 peaks in the spectrum. Therefore isomer A is cis-[Mo(CO)4(PPh3)2].

As a result, it can be deduced that isomer B of [Mo(CO)4(PPh3)2] is the trans geometrical isomer. The trans isomer has a D4h point group and so is expected to produce a single peak in the IR spectrum. As predicted, the spectrum of isomer B has a peak in the carbonyl region at only 1873.38 cm-1. The trans-[Mo(CO)4(PPh3)2] isomer was a brown solid and produced at a reasonable yield of 65%.

The trans isomeric form of [Mo(CO)4(PPh3)2] is the thermodynamically more stable form of the two isomers. The trans isomer required more vigorous reaction condition such as the solvent heated to 110 â°C and a longer reaction time as opposed to the milder conditions used for the formation of the cis isomer. The trans isomer places the two bulky PPh3 ligands as far as possible from one another, at 180 â° apart, which gives the complex the lowest possible energy.

Cis-[Mo(CO)4(PPh3)2] is the kinetic product of the reaction since it forms at a faster rate. This is because the activation energy barrier is much smaller, as reflected by the mild conditions imposed (40 â°C toluene, 15 minute reflux).

The synthesis of all three complexes was successful. A good yield was obtained for the formation of [Mo(CO)4(piperidine)2] at 83%. However, isomer A of [Mo(CO)4(PPh3)2] was produced at a relatively low yield of 44%, in comparison to 65% produced for isomer B. The low yield of isomer A affected the proceedings of the subsequent steps of the reaction, and so required a scaling down of reagents used from this point onwards.

For isomer A of [Mo(CO)4(PPh3)2], the point group was also inferred to be C2V. using the method of unshifted C=O bonds, it was determined that four peaks are expected in the spectrum corresponding to C=O vibrations. The infrared spectrum obtained did indeed have four bands at 2011.26, 1876.74, 1756.04 and 1706.81 cm-1. This shows good correlation with the predictions from group theory.

For isomer B of [Mo(CO)4(PPh3)2], the spectrum displayed a single peak at 1873.38 cm-1 which corresponds to C=O. The geometry of the complex is therefore confirmed to be trans, and the point group deduced to be D4h for the complex.

The colours of the complexes showed good agreement with that reported in literature. The intermediate complex [Mo(CO)4(piperidine)2] was yellow in colour. The cis isomer of [Mo(CO)4(PPh3)2] was pale yellow, whilst the trans isomer was brown.

To summarize the products were produced in reasonable yield, and the IR spectra along with group theory allowed the distinction of the isomeric forms of the complexes.

There are two types of bonding between a d-block transition metal and a ligand, namely σ-bonding and π-bonding. σ-bonding is present in all interactions between a metal and ligand because the lone pair of the ligand lies on the internuclear axis. However, some ligands are able to participate in π-bonding interactions. A ligand is said to be a π-donor ligand if the interaction involves donation of electron density from a filled orbital towards an empty metal orbital. It is also possible for a ligand to be a π-acceptor ligand. In this case, electron density is donated from a filled orbital on the metal to an empty orbital on the ligand.

The bonding between a d-block transition metal and specific ligands is discussed below:

Carbon monoxide is a strong field ligand with its position high in the spectrochemical series, which means that it gives rise to low spin complexes, due to the fact that it has a large value of Δoct. There are two components that describe the metal carbonyl bonding.

σ-bonding – when a lone pair of electrons from C≡O is donated to an empty d-orbital on the metal, this is known as σ-bonding.

π-acceptor ligand – when electrons from the filled metal d-orbital are donated to an empty π* acceptor orbital on CO, this is known as π-back donation.

CO is both a σ-donor and π-acceptor ligand. Since these components complement one another, this results in synergic bonding. In other words, the greater the σ-donation the greater the π-back donation. However the extent of backbonding does depend on the oxidation state of the metal and the electronic properties of the other ligands present. Structurally, as a result of synergic reinforcing components, the metal carbonyl bond strength is increased, but this means the C≡O is weakened, relative to free C≡O gas. This is due to an increase in the electron density of the antibonding π* orbital.

Triphenylphosphine has a lone pair of electrons on P that it is able to donate to the transition metal centre, and so acts as a σ-donor ligand as illustrated in figure….

The phosphine has a vacant orbital, so in theory it can also act as a π-acceptor ligand. However, the 3d orbitals that are vacant on phosphorus may be of too high energy for π-backdonation to occur. Instead the σ* orbital contributes as the main acceptor component.

The molecular formula of piperidine is C5H10NH and the structural formula is displayed in figure…. 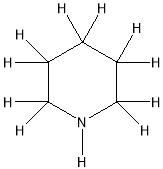 Since only the C≡O bonds are being considered, the reducible representation of the number of unshifted C≡O bonds under each operation of the point group is detailed in table…….

Therefore when the formula is applied to each line of the character table we get:

The complex was then described in terms of vibrational modes, Ð“CO

Using table (C2v character table) it can be seen that A1, B1 and B2 are all infrared active. Therefore cis-[Mo(CO)4L2] would be expected to give rise to four peaks in the vibrational spectrum.

The same process was carried out for the trans isomer in order to determine the number of IR active bands in the vibrational spectrum.

Since only the C≡O bonds are being considered, the reducible representation of the number of unshifted C≡O bonds under each operation of the point group is detailed in table…….

Therefore when the formula is applied to each line of the character table we get: