On isolation of Sarracenin from Root barks of Strychnos spinosa and its Antimicrobial Properties.

A known iridoid, Sarracenin, was isolated from the root bark of Strychnos spinosa. Its structure was elucidated by 1D and 2D-NMR experiments, and comparison with reported data. This is the first time it has been isolated from this species. The compound showed significant antimicrobial activities against Staphylococcus aureus, Streptococcus pyogenes, Shigella dysenteriae, Klebsiella pneumonia, Candida albicans Candida tropicalis, Candida thrusei, and Candida stellatoidea, respectively.

The genus Strychnos (Loganiaceae), consist of about 75 accepted species found throughout the tropics and subtropical Africa [1]. Strychnos spinosa is commonly known as Kaffir orange, Spiny monkey orange or Natal orange. It is utilized variously in African traditional medicine for ailments such as dropsy, earache, snakebite, fever, elephantiasis, fever epilepsy and rheumatism [2]. The isolation and structural elucidation of the iridoid sarracenin from the root bark of this plant and its antimicrobial activity against Staphylococcus aureus, Streptococcus pyogenes, Shigella dysenteriae, Klebsiella pneumonia, Candida albicans Candida tropicalis, Candida thrusei, and Candida stellatoidea, respectively, is hereby reported.

Results and Discussion. The compound was obtained as fine, transparent, needle shaped crystals. It was determined as Sarracenin using 1D and 2D-NMR experiments, and comparison with reported data [3, 4, 5]. Some revisions to reported chemical shift assignments [3, 4] based on our DEPTq135, H, H-COSY, HMBC, HSQC and NOESY data are suggested.

It was noted that the compound contained 11 signals using13C-NMR and DEPT spectra, including two Me, one CH2, six CH, and two quaternary carbons. Analysis of overall NMR spectroscopic data revealed the signals at 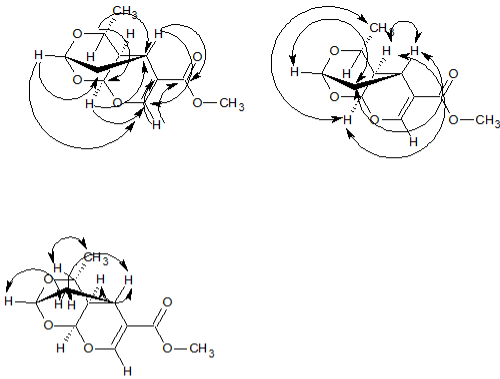 The antimicrobial activities of sarracenin were assayed against some pathogenic microbes obtained from the Department of Medical Microbiology A.B.U. Teaching Hospital, Zaria, Nigeria. The compound showed significant antibacterial and antifungal activities against Staphylococcus aureus, Streptococcus pyogenes, Escherichia coli, Salmonella typhi, Shigella dysenteriae, Pseudomonas aeroginosa, Klebsiella pnuemoniae, Candida tropicalis and Candida stellatoidea (Table 3.). This points sarracenin out as a major medicinal principle of Strychnos spinosa and lends justification to its use in traditional medicine.

The root bark of Strychnos spinosa was collected from Katsina-Ala, Benue State, Nigeria, in August, 2013. The bark was air-dried and their size reduced with the aid of a wooden mortar and pestle.

The ground material (750 g) was macerated for 72 hours using 500 mL each of hexane, chloroform, ethyl acetate and methanol. Preliminary antimicrobial screening revealed the ethyl acetate extract to be most active against test microbes. Thus the ethyl acetate extract (10 g) was separated by Vacuum liquid chromatography. A very gentle gradient elution was used from hexane through to ethyl acetate. Thirty fractions (25 ml each) were collected and allowed to evaporate to approximately half their initial volumes. Fine needles were observed in fractions 20-25. These were monitored by TLC on ethyl acetate- methanol (1:1) solvent system and plates visualized using iodine vapour. The combined needles (221 mg) were further purified using SephadexLH20 with methanol-ethyl acetate ratio (1:1) as solvent. 1HNMR, 13CNMR and 2DNMR experiments were carried out on the purified compound using 30 mg. Its melting point was 123 – 1240C determined using Electro thermal IA 9300 (Gallenkhamp capillary melting point apparatus with a thermometer).

The compound (0.01 mg) was weighed and dissolved in DMSO (10 mL) to obtain a concentration of 10 µg/mL (This would subsequently be used to determine the antimicrobial activities of the plant). Mueller Hinton and Sabouraud dextrose agar were used as growth media for the microbes. All the media were prepared according to the manufacturer’s instructions, sterilized at 121 oC for 15 min and were poured into sterile petri dishes, allowed to cool and solidify. Disc diffusion method was used to screen the initial crude extracts. Sterilized media were seeded with a standard inoculum (0.1 ml) of test microbe, Mueller Hinton for the bacteria and SDA for the fungi. The inoculum was spread evenly over the surface of the media using a sterile swab. A well (6 mm) was cut at the center of the inoculated medium using a standard cork-borer (6 mm diameter). Solution of the extract (0.1 mL) was introduced into each well of the inoculated medium. The inoculated media were incubated at 37 oC for 24 hours for bacteria and at 30 oC for 7 days for the fungi, after which plates were observed for zones of inhibition of growth.

Minimum Inhibitory Concentration of the compound was determined using the broth dilution method. Minimum bactericidal concentration and minimum fungicidal concentration (MBC and MFC) were also carried out to determine whether the test microbes were killed or only inhibited. Ciprofloxacin, Fulcin and Fluconazole were used as positive controls.