ISOLATION AND BIOLOGICAL ACTIVITY OF THE TRITERPENE Β-AMYRIN FROM THE AERIAL PLANT PARTS OF MAESOBOTRYABARTERI(BAILL).

Maesobotrya barteri(Baill), belonging to the family EUPHORBIACEAE, is a medicinal plant growing widely in tropical Africa. The Aerial plant parts of Maesobotrya barteri (Bail) were collected fresh from Orokam, Ogbadibo local Government of Benue State, Nigeria in July, 2013. Taxonomical identification was done by Mallam Musa Abdullahi at the Herbarium unit of Biological sciences Department, ABU, Zaria, Nigeria. Pulverized aerial parts of Maesobotrya barteri (960g) was exhaustively extracted successively using petroleum ether, chloroform, ethylacetate and methanol and concentrated in the rotary evaporator at 40oC. The ethylacetate fraction having the highest activity against test microbes from preliminary crude microbial screenings was subjected to phytochemical studies, antimicrobial analysis and column chromatography (CC). The column chromatography yielded fraction EN, which was further purified using preparative thin layer chromatography to give EN1. The structure of the isolated compound was established using 1-D NMR and 2-D NMR spectroscopic analysis and by direct comparism with data reported in literature was confirmed to be β-amyrin. The bioactivity of this compound was carried out using some clinical pathogens and the activity compared with standard drugs and this was found to be comparable with the standard drug.

Maesobotrya sp is a variety of flowering plant belonging to the family Phyllanthaceae, or by some authors classified in Euphorbiaceae. The Euphorbiaceae plants are shrubs, trees, herbs or rarely lianas [1]. Plants of the Euphorbiaceae are known to be rich in terpenoids (69.5%) [2].

In Nigeria, the species M.barteri is under-exploited although the tree is of both medicinal and nutritional importance [3]. Maesobotrya species are used medicinally in different regions in Africa [4]. It bears succulent black-purple fruits that are edible and stain the tongue. The nutritive values of the fruits and seeds have been studied in Southern Nigeria [5]. Thus, this study aims at validating the antimicrobial effects of the aerial plant parts of Maesobotrya barteri used in traditional medicine in Orokam town of Benue State,Nigeria, as well as potent compounds that can be used as precursors for synthetic drugs.

The presence of secondary metabolites in plants generally has been confirmed by [6], [7] and [8] through useful procedures and suggestions to get to targeted precursors which are of useful aids in the formulation of modern drugs.

The aerial parts of Maesobotrya barteri were collected from Orokam in Ogbadibo local government area of Benue State in the month of July, 2013. They were properly identified at the herbarium, Department of Biological Sciences, Ahmadu Bello University, Zaria. The whole plant was sorted, air dried under shade, segregated and pulverized by mechanically pounding them using wooden mortar and pestle. The pulverized plant material was stored away from moisture.

980.54g of the pulverized plant materials were carefully weighed and loaded into a Soxhlet extractor. It was extracted successively with Petroleum ether (60-80oC), Chloroform, Ethyl acetate (76-78oC) and Methanol by hot continuous percolation method in the Soxhlet apparatus for 72 hours respectively. Solvents used were those of JHD and general purpose reagents The extracts were concentrated in vacuo at 40oC using rotary evaporator and subjected to air drying to give dried crude extracts.

The ethyl acetate extract was the most sensitive extract from the antimicrobial screening and was subjected to column chromatography (CC) for fractionation. Solvents used to run the column chromatograghy were sealed and are products JHD with 98% purity. Fifteen grams (15g) of the extract was dissolved in ethyl acetate and preadsorbed on 10.0g silica gel (qualikens 60-120 mesh). The dried pre-adsorbed extract was transferred to a mortar and ground to give a fine powder and was added at the uniform layer on top of the column. The petroleum ether descended on a horizontal line indicating that the column was well packed. A total of 105 fractions (50mls) each were initially collected using gradient elution with a solvent combination of petroleum ether and ethyl acetate, starting with 100% petroleum ether with an increasing polarity of 1% ethyl acetate. Similar fractions were pulled together based on monitoring from TLC. Fractions F20-F25 were pulled together at the ration of 8:2 and where subjected to further purification using Preparative thin layer chromatography to obtain a solid white amorphous substance which after several trails using different solvent combinations showed a single spot which was visible under the UV lamp and after spraying the TLC plate with 10% H2SO4 and oven dried for 5minutes at 60oC. The solid white amorphous substance produced was insoluble in ethyl acetate or petroleum ether but soluble in chloroform.

From the preliminary antimicrobial screening of the crude aerial plant parts extracts of M. barteri, ethylacetate extract exhibited the highest activity against the test microbes used via their zones of inhibition. Therefore, an activity guided isolation was undertaken.

The antimicrobial activities of compound EN1 isolated from ethylacetate extract of the aerial plant parts of M. barteri was examined and agar disc diffusion method [13] was employed for the determination of the antimicrobial activities. The pure compound was determined using some pathogenic microbes; the microbes were obtained from the department of Medical Microbiology Ahmadu Bello University Teaching- Hospital, Zaria, Nigeria.

The determination of minimum inhibitory concentration was carried out using the nutrient broth susceptibility assay prepared according to the manufacturer’s instructions, as recommended by NCCLS [14]. Minimum inhibition McFarland turbidity standard scale number 0.5 was prepared to give turbid solution. Normal saline was prepared and was dispensed into test tube and the test microorganism was then inoculated into the normal saline, incubation was at 37oC for 6hrs, dilution of the microorganism in the normal was performed until the turbidity marched that of the McFarland by visual comparison at this point the microorganism had a concentration of about 1.5Ð¥108 cfu/ml.

Minimum Bactericidal and fungicidal concentration of compound EN1 was carried out to check whether the test microbes were killed or only their growth was inhibited. Mueller Hunton agars were prepared according to the manufacturer’s instruction, as recommended by NCCLS [14]. They were boiled to dissolve and were sterilized at 121oC for 15 minutes, the media were cool to 45oC and the medium (20ml) was poured in to sterile Petri dishes, the plates were covered and allowed to cool and solidify. The contents of the MIC in the serial dilution was inoculated on to the media, the media were incubated at 37oC for 24hrs for the bacteria and at 30oC for 1-7 days for fungi, after which the plate were observed for colonies growth. The MBC/MFC was the plate with lowest concentrations of the extract without colony growth.

Table 2 shows the Zones of inhibition (mm) of the pure the compound EN1 from the ethyl acetate fraction which showed remarkable activity against twelve of the sixteen organisms tested. Compound EN1 could not inhibit the growth of Corynebacterium ulcerans, Candida albicans, Candida tropicalis, Aspergillus fumigates, Aspergillus nigre. The various minimum inhibitory concentration (MIC) and minimum Bacteriocidal concentration and fungicidal concentration (MBC/MFC) for the different microbes are as shown in Tables and the bioactivity of the aerial plant parts of M. barteri is comparable to the drugs Ciprofloxacin, Fluconazole and Fulcin used as positive controls.

Table 2: Zone of inhibition of Compound EN1 against the test microorganism

Table 2 and 3 shows the activity of the compound EN1 which the spectroscopic analysis was proposed to be a β-Amyrin or β-Amyrenol, (C30H50O, 426.7 g/mol). Antimicrobial screening reported from other natural products has also confirmed the microbial properties of β-Amyrin. β-Amyrin was isolated from Ardisia elliptica [9], a medicinal plant used for alleviating chest pain, fever, liver poisoning and parturition complications. It was found that β-Amyrin was six times as active as aspirin in inhibiting platelets aggregation. β-amyrin was isolated for the first time fromLaurencia microcladia, marine algaedistributed widely in Egypt found to have antibacterial activity against Staphylococcus aureus, Bacillus subtilis, Salmonella typhi, Escherichia coli, and Pseudomonas aeurginosa [10].

Table 3b: Minimum Bactericidal Concentration and

The structure of compound EN1 was elucidated using Nuclear Magnetic Resonance Spectroscopy (NMR), 1-DNMR and 2-DNMR and also by comparing the obtained data with already existing literature. The results obtained are as shown in the table. 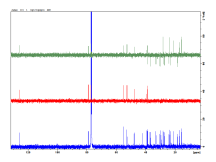 Table 4: Comparison of 13C NMR spectrum data of β-amyrin Obtained from the Aerial parts of M. barteri with literature 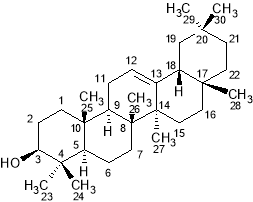 The isolation of β-Amyrin from the aerial plant parts of M. barteri, whose bioactivity was established from this work by its zone of inhibition, is comparable to the drugs of Ciprofloxacin, Fluconazole and Fulcin. This justifies why the plant really serves as a general purpose antibiotic in traditional medicine in our society. The preliminary phytochemical screening also shows that the ethylacetate extract contains other classes of compounds that can be further isolated and tested for microbial activities and this can lead to chains of discoveries as the quest of precursors for modern drugs are continually on course.