Figure 1: The donating of an electron from a sodium atom to a chlorine atom forming sodium and chlorine ions.

At the correct interatomic distance there is enough electrostatic attraction between the two particles to release enough energy to make the reaction feasible. 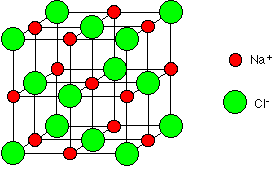 It should be noted that the above model of the 6:6 co-ordinate structure of NaCl should not be assumed as the actual structure.  It is merely a representation of the relative placement of ions in relationship to each other.  From the above model we would presume that there is space in between each ion whereas in actuality there is no space between the ions at all.  A better representation of the structure of NaCl can be found below (Figure 3).

When discussing the crystal structure of sodium chloride, we must first understand that the crystal structure is made up of multiple repeating unit cells.  It is useful to think of the ions being solid spheres when working out structures.  In sodium chloride the ions form face-centred cubic packing cells which is made up of multiple layers.  The first close packed layer is formed where each ion is surrounded by 6 other ions, the second layer sits in the gaps of the first layer (Figure 4) and the third layer sits in the empty spaces above the first layer (Figure 5).

Figure 4: Layers A and B
http://www.chem1.com/acad/webtext/states/crystals-cubic.html
[Accessed 26 November 2018]

Another type of packing called hexagonal close packing can be formed by placing the third layer directly above the first layer however this is not the case in sodium chloride.  Face-centred cubic close packing forms an ABCABC layered structure whereas hexagonal close packing forms an ABABAB layered structure.  The unit cell of sodium chloride can be thought of as two mutually interpenetrating slightly expanded face-centred cubic arrays of ions (Atkins and Paula, 2002).

Due to this very strong and ordered giant ionic crystal structure, sodium chloride is found as small cubic crystals (Figure 7) which can be transparent or white. 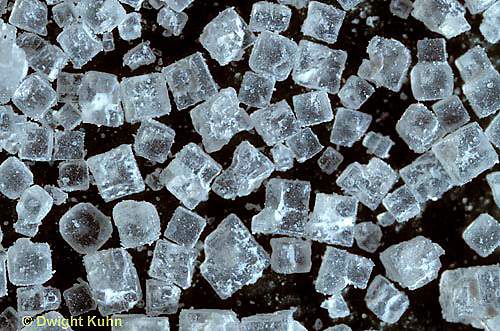 The physical properties of sodium chloride can be explained by understanding the bonding and structure of the crystals.

The crystals of sodium chloride are also very brittle (Figure 8).

Figure 8: The movement of layers in a crystal due to stress explains the brittleness of sodium chloride
https://www.chemguide.co.uk/atoms/structures/ionicstruct.html
[Accessed 05 December 2018]

This is due to the interactions of ions when layers of the crystal shifted slightly due to force.  If a layer is shifted in any direction then the ions of the same charge are brought together and repel each other, forcing the crystal apart.