Cytochrome P450s are a superfamily of haemoproteins1-3 which catalyse the oxidation of organic molecules4. One P450 enzyme studied for its hydroxylation mechanism is P450cam (CYP101) from the Pseudomonas putida bacteria, whose crystal structure (1DZ9) was solved by Schlichting et al.5. The active form of P450cam contains an oxyferryl species known as compound I(CPDI), where the iron has a formal oxidation state of Fe(V) 6, 7 in the plane of a porphyrin ring with a protruding oxygen atom. This oxygen atom is a tremendously potent oxidising agent and can readily abstract a hydrogen of a C-H bond from non-activated hydrocarbons with potentially high regioselectivity[REF].

An introduction to haem oxygenases

An introduction to CHARMM and EVB

An introduction to haem oxygenases

After hydrogen and helium, oxygen is the third most abundant chemical element in the universe8 and makes up 20.9% of Earth’s atmosphere9. Oxygen accounts for 65% of the mass in humans8 as it is found in all biological systems including carbohydrates, proteins, lipids and water. Oxygen occurs in the atmosphere as dioxygen, with a triple ground state where the two unpaired electrons are occupying two degenerate molecular orbitals10. This makes incorporating atmospheric oxygen into organic molecules (predominantly singlet species) extremely difficult as it would be a spin forbidden process. 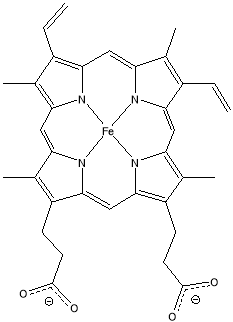 Haem oxygenases are enzymes containing a prosthetic haem cofactor, an iron atom held by a porphyrin ring. Haem B is the most common prosthetic haem group, consisting of a protoporphyrin IX ring bound to the iron. It is most commonly found in the human body inside haemoglobin and myoglobin11, playing a major role when it comes to binding atmospheric dioxygen. There are two groups of haem oxygenases, monooxygenases and dioxygenases, one reacts using a single oxygen atom and the other using both oxygen atoms.

The haem B cofactor and the apoenzyme are synthesised separately in different parts of a cell and they are connected via ligation to the iron atom on the proximal face12. The protoporphyrin ring is a tetrapyrrole macrocycle synthesised from basic biological precursors including succinyl CoA and the most basic amino acid, glycine13. Ferrochelatase coordinates the iron atom to the protoporphyrin, producing haem B14. In cytochrome P450 enzyme the iron is ligated to a proximal cysteine residue via the sulphur atom15, however in some other oxygenases and other haemoproteins such as haemoglobin and myoglobin the iron is coordinated to a proximal histidine residue16.

In monooxygenases one of the dioxygen atoms is converted to H2O and the other is commonly inserted into an aliphatic position of the substrate, producing a hydroxyl group by oxidation of reducing agents such as NADH and NAD(P)H17, 18. The most studied haem-containing monooxygenases are the superfamily of cytochrome P450 enzymes due to their large diversity and versatility19, 20.

Cytochrome P450 enzymes (CYP) were first discovered by Axelrod21 and Brodie et al.22 in 1955 when they observed the oxidation of xenobiotic compounds in the endoplasmic reticulum of the liver, but the enzymes responsible were still unknown until 1962. Klingenberg23 and Garfinkel24 found a carbon monoxide binding pigment in the rat and pig livers, respectively, which had an absorption maximum at 450 nm. The CO molecule was bound to the centre of the haem and its 450 nm absorption maximum25 is prevalent in all CYPs26-28, an electron spin resonance spectrum identified this enzyme was a low spin haemoprotein29. This 450 nm Soret peak is the origin of the name P450. The superfamily of CYPs contain over a thousand haem monooxygenases30 and are present in nearly all living organisms and even viruses, a well-known exception is Escherichia coli4, 19 which is widely used to investigate CYPs by sequence insertion into plasmids and allow the E. coli to express the genes31, 32. CYPs typically contain approximately 500 amino acids, the cysteine residue which ligates to the haem group is located near the carboxy-terminus and the amino-terminus region of CYPs are rich in hydrophobic residues and is believed to be responsible for binding the enzymes to the lipid bilayers of cells33.

CYPs in mammals are a crucial part of catalysing the metabolism of organic compounds and the biosynthesis of steroid hormones34, such as oestrogen and testosterone, and are able to perform hydroxylation, epoxidations and other oxidation reactions at physiological temperatures35 extremely selectively. Such reactions when performed uncatalysed tend to require extremely high temperatures5. CYPs are tremendously versatile, they’re able to catalyse a wide range of foreign hydrophobic compounds, which helps to protect the organism if they have ingested potentially harmful substances including toxins and carcinogens36. This ability is often called “xenobiotic metabolism”37.

Humans have 57 different CYP isoforms divided into 18 families and 42 subfamilies34. Most of the isoforms are found on membranes, including the inner membrane of mitochondria, the endoplasmic reticulum and the cell membrane. They all differ in roles but the processes they all catalyse are similar and a few are crucial for catalysing more than once process. For example CYP 17A1 is located in the endoplasmic reticulum and is shown to be both a hydrolase and lyase, a key enzyme in the biosynthetic pathway of steroids including oestrogens and progestins39. The most researched area of CYPs is the drug metabolising CYPs in the human hepatic system such as 3A440, 2C941, 2D642, 2E143, 1A2 and 2C1944. These CYPs are responsible for the xenobiotic metabolism against infested foreign compounds, breaking them down into more readily soluble products to aid excretion through the urinary system45. For this reason, a good understanding of the metabolic pathway of organic molecules inside the body allows drug development to invent new methods of bioactivation of inert but bioavailable forms of an active compound, where the ingested compound is inactive but gets metabolised into the active form inside the body. The versatility of CYPs can sometimes cause unexpected side-effects in metabolising pharmaceutical drugs, for example some bioactive compounds in grapefruit juice have been found to inhibit CYP catalysed metabolism of certain cardiovascular drugs, causing an increased blood concentration of the bioactive drug, thus leaking to a risk of overdose46, 47.

P450cam was the first CYP to have its three-dimensional structure determined. It displays a high region- and stereoselectivity when catalysing the hydroxylation of camphor, only the exo-hydroxyl at C5 position is produced. Despite the extensive research into P450s, there are still certain details of the mechanism which are not fully understood.