The birth of the natural product synthesis dates back to 1828 when Friedrich Wöhler synthesized urea, a naturally occurring substance from ammonium cyanate. This event as trivial as it may seem by today’s standards not only gave birth to a boundless science called organic synthesis but also contributed to a demystification of mother Nature by burying the fact that synthesis of nature’s molecules is her exclusive domain. The second major achievement in the field of organic synthesis is the synthesis of acetic acid from elemental carbon by Kolbe3 in 1845. It is historically significant because Kolbe coined the word Synthesis for the first time to describe the process of assembling a chemical compound from other substances. The total synthesis of naturally occurring pigments alizarin in 1869 by Graebe and Liebermann and indigo in 1878 by Baeyer represent landmark accomplishments in the field. Probably, after urea, the most spectacular total synthesis of the nineteenth century was that of Emil Fischer’s (‡)-glucose not only for the complexity of the target but also for the considerable stereochemical control that accompanied it. 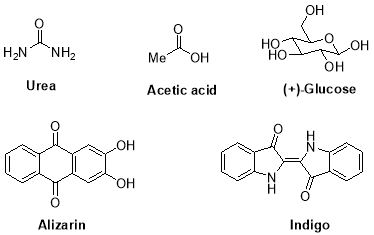 Although the precedent was set in the nineteenth century, it was only in the twentieth century the field of total synthesis started to flourish when Robert Burns Woodward synthesized Quinine. This event ushered in the modern era of total synthesis and Woodward who received the 1965 Nobel Prize for Chemistry for several brilliant examples of total synthesis such as his 1954 synthesis of strychnine, cholesterol5 is regarded as the “father” of modern organic synthesis.

Today the art of organic synthesis has improved to astoundingly high levels of sophistication. Through its practice, chemists are able to synthesize organic molecules of all types of structural motifs and for all intents and purposes.

Some modern classical examples of total synthesis include the synthesis of prostaglandin PG2α and Ginkgolide by E. J Corey, Ingenol by Wood, Brevetoxin by Nicolaou, Vancomycin by Evans, Taxol by Holton6, Nicolaou7, Wender and Danishefsky8 groups independently. 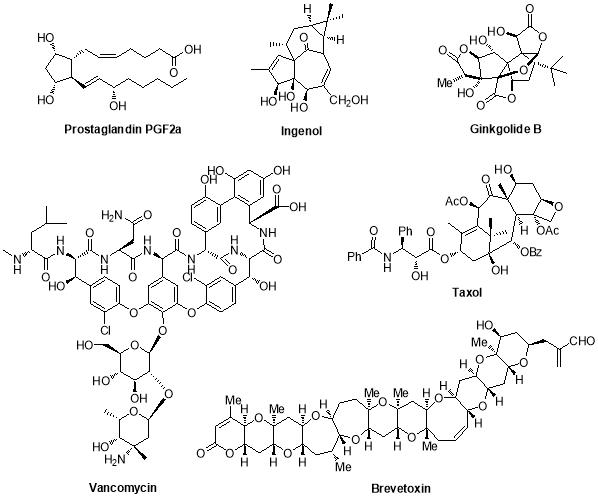 The discipline of natural product synthesis today, is an important field of investigation whose dividends stretch from new scientific knowledge to practical applications. Considered by many as the flagship of organic synthesis, natural product synthesis symbolizes the power of chemical synthesis at any given time and defines its scope and limitations. It also serves to improve chemical synthesis by attempting to push its frontiers into higher molecular complexity, diversity, and efficiency.

they can synthesize not only the molecules of nature and their analogues, but also myriad other organic molecules for potential applications in many areas of science, technology and everyday life

It’s worthwhile at this juncture to discuss few THF ring containing natural products such as which have been of paramount importance to the mankind and also to the researchers who have been actively involved in the synthesis and isolation of these natural products.

Uvaricin, a bis THF acetogenin was the first of the AAGs isolated from Uvaria acuminata in 1982. It exhibited potent anti-cancer activity by inhibiting NADH cells in the mitochondrion. The total synthesis of Hexepi-Uvaricin was published by Hoye in 1994 and subsequently first total synthesis was achieved by Keinan in 1998.

Montanacin D is a non classical acetogenin isolated from the ethanolic extract of the leaves of Annona Montana16 by Qin group in 1999, possessing a 4,8-cis THP ring along with a 16,19-trans THF ring. 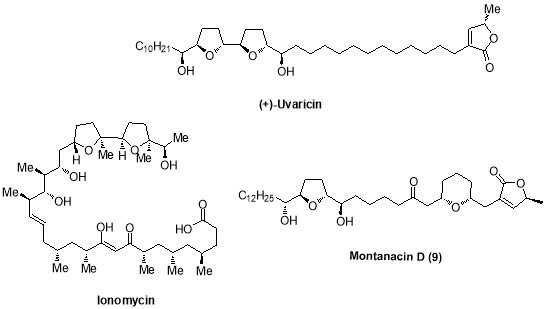 Amphidinolides constitute a series of unique cytotoxic polyketide macrolides obtained from marine symbiotic dinoflagellates of the genus Amphidinium, which are symbionts of Okinawan marine flatworms Amphiscolops spp.1 They exhibit potent cytotoxic activity against murine lymphoma L1210 cells and human epidermoid carcinoma KB cells. Given below are some important Amphidinolides that incorporate a THF-ring in their structure 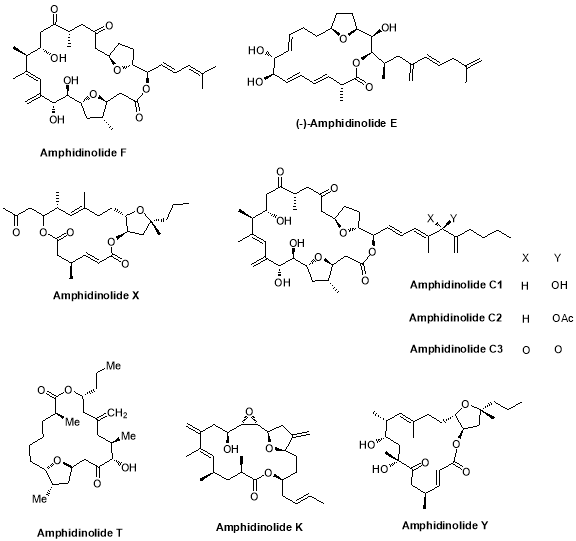 Pectenotoxin (PTX)-group toxins are a group of polyether macrolide compounds found in microalgae and bivalve molluscs of Australia, Japan, New Zealand and some parts of Europe. Their presence in shellfish was discovered due to their high acute toxicity in the mouse bioassay after intraperitoneal (i.p.) injections of lipophilic extracts of shellfish. Pectinotoxins are exclusively produced by Dinophysis species. In shellfish they are always accompanied by closely related okadaic acid (OA)-group toxins.

The common structural features of (PTX)-group toxins include a spiroketal group, three THF-rings, a bicyclic ketal and a six-membered cyclic hemiketal (Allingham et al., 2007). PTX2 is beleived to be the main precursor, from which many PTX-group toxins are derived through biotransformation during metabolism in the gut of bivalves. It is suggested that an oxidation of PTX2 occurs, leading to the formation of other PTX-group toxins, including PTX1, PTX3, and PTX6

PTX-group toxins have been shown to cause cell cycle arrest, cell death and apoptosis. The wide range (10-9 and 10-6 M) of effective concentrations of PTX-group toxins as well as the apparent resistance of some cell lines to the cytotoxic effect of PTX-group toxins indicate the existence of cell-specific factors affecting the sensitivity of biological systems to this group of natural compounds. Studies have confirmed that PTX2 induces apoptosis in several cell lines through multiple mechanisms, involving the perturbation of the cell cycle machinery, inhibition of mitotic separation and cytokinesis through the depolymerization of actin filaments. 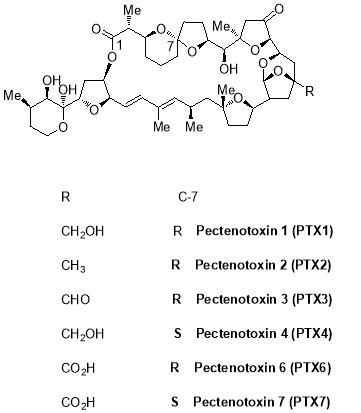 Oscillariolide is a halogenated macrolide isolated from a marine blue-green alga Oscillatoria sp. from Gokashowan-Bay, Mie Prefecture. It exhibits significant cytotoxic activity in the echinoderm egg assay. Phormidolide, a closely related macrolide was isolated from the extract of a laboratory culture of an Indonesian isolate of the cyanobacterium Phormidium sp. It displayed cytotoxicity towards drine shrimp with a LC50 of 1.5 µM. The characteristic features of both oscillariolide and phormidolide include a trisubstituted bridged THF macrolactone with a long polyhydroxy chain containing a unique terminal bromo diene. Structural elucidation revealed that the polyhydroxy side as well as THF ring of both compounds have same stereochemistry 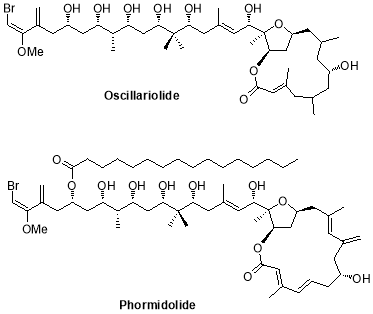 Chagosensine is a sixteen-membered chlorinated macrolide isolated from the methanolic chloroform extract of a bright yellow sponge Leucetta chagosensis usually found in the coral reefs of Red Sea, Aqaba Gulf (Israel). the extract of the Leucetta sp. sponge exhibited potent ability to inhibit the epidermal growth factor receptor signaling pathway. A new mechanism for the action of naamidine A and inhibition of tumor cells was shown.