Chemical bonds are either ionic or covalent. When a metal is present the bond is ionic as an electron is given from the metal to the non-metal, so the two ions are attracted to each other. When a bond is between two non-metal’s then it is covalent meaning that in the outer electron shells of the two atoms bonded electrons share electron to complete their outer electron shell.

In figure 1 it can be observed how the electrons are shared in ionic and covalent bonds. This explains the high difference in the resultant electronegativity between ionic and covalent bonds. Metal, as an ion, donates an electron making it positively charged and a non-metal, as an ion, gains an electron making it more negatively charged meaning the attraction between ionic bonds is greater than that of covalent bonds. Ionic bonded substances are more polar than covalent bonded substances thus a better solvent. NaCl has a much high boiling point (around 1413°c) than for example HCl (around -85c)

Sodium Chloride, better known as table salt, is an example of an Ionic bonded substance due to the high difference in electronegativity. Sodium and chlorine as elements are very reactive and thus poisonous to the human body in large quantities if uncontrolled. So the fact that sodium and chloride are ionically bonded helps to control the concentration of sodium and chlorine in the body as it can only be broken down when it needs to be in the liver. Sodium and chlorine is needed In low concentrations for key cell functions in nerve cells for maintaining the “resting potential of nerve axon cells which is -70 mV” (Hall et al., 2009) maintained by the “sodium potassium pump”. It is required for the nerve cells in the human body to function. It’s the reason for why you can feel or can react to stimuli.

A molecule is always non polar, where the bonds between atoms in the molecule are non-polar an example of this would be H-I.

Water is an example of a polar covalent bond as it consists of polar covalent bonds H-O and the molecule is asymmetrical. This means that water is a good solvent allowing it to transport sugars and salts around the body, in blood, as they can be easily dissolved in an aqueous solvent such as water. In figure 2 you can see the relative charge of the molecule in water. CCl4 is example of a molecule of which its atoms are polar bonded together but due to the symmetry of the molecule observed in figure 2 the polarity of the molecules cancels itself out, and it acts as if it’s non-polar in intermolecular interactions

The strength between intermolecular bonds is a lot weaker than the strength of intramolecular bonds and the weakest form of intermolecular bond is a bond that uses Van der Waals forces or an instantaneous induced-dipole bond. These are observed when a nearby non-polar molecules experiencing an instantaneous dipole, due to the random nature of electron clouds oscillating on molecules, which induces a dipole of another molecule, it may cause a ripple effect inducing dipoles on nearby non-polar molecules. Larger molecules have a larger electron cloud which means the induced and potential electronegativity of instantaneous dipoles would be stronger. Van der Waals forces is the attraction that occurs between all molecules polar or non-polar, but is the only source of intermolecular attraction between non-polar molecules. Lower boiling points will be observed of substances of similar elements that are polar, dipole-dipole bonds or even stronger hydrogen(dipole-dipole) bonds, than that of non-polar Van der Waals force bonds, as they are much stronger so it requires more energy(heat) to break them. Figure 3 is an example of an induced dipole bond from an instantaneous dipole. 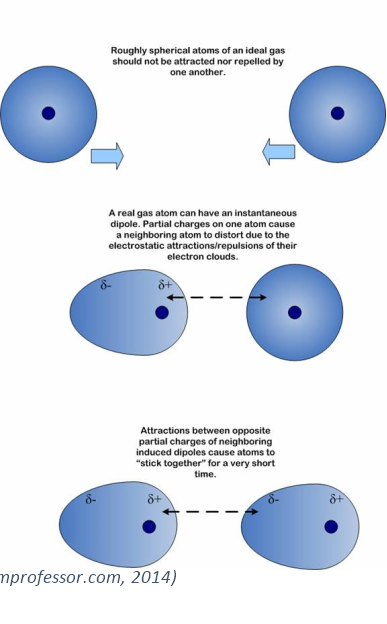 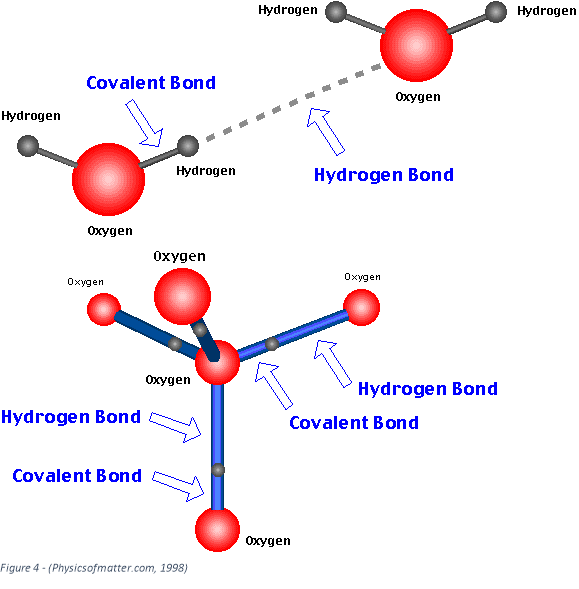 Hydrogen bonding (an example of a strong dipole-dipole bond) is another example of an intermolecular. Standard hydrogen bonding is an intermolecular bond where a hydrogen from one molecule is attached to one of the most electronegative elements; oxygen, nitrogen or fluorine of another molecule. Figure 4 shows a diagram of a hydrogen bond between two water molecules. These bonds help to keep the water molecules together so it requires more energy for the substance to change state from liquid into a gas. It also means when water is a solid (ice) it is less dense than when it is a liquid, which is unusual as usually substances tend to expand when they heat up. Heat is a measure of kinetic energy of a substance, so when substances, molecules or atoms, has more kinetic energy it is more fluid, less packed together (less dense). You can see in figure 4 that each oxygen atom is bonded from a combination of hydrogen (intermolecular) and covalent (intramolecular) bonds to 4 oxygen atoms. There is a lot of free space around these atoms when they are structurally bonded this way, so this is why ice is less dense than water. The structural function of ice is important for all seasonal marine life and some land organisms as it allows ice to float.