The plant material was collected from the Tirupati, Andhra pradesh, India in the month of February 2014. The plant taxonomical authenticated by Prof; Dr. K. Madhava chetty, Department of Botany, SV University, Tirupati. The voucher specimen of Corallocarpus epigaeus L has been preserved in our laboratory for further collection and reference.

The fresh leaves of Corallocarpus epigaeus L. The sieved powder was stored in airtight container and kept at room temperature for further study. The dried powdered material (250gm) was extracted with 95% ethanol using soxhlet apparatus for about 72hours. 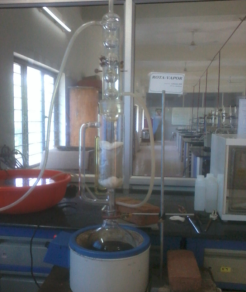 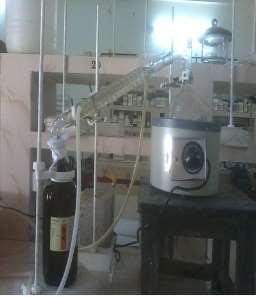 After extraction with solvent, the marc was dried in hot air oven below 50o c and was concentrated by distilling off the solvent and evaporating to dryness. The dried extract was subjected to preliminary phytochemical screening for detection of various phytoconstituents.

To 1 ml of the extract, a drop or two drop of Mayer’s reagent was added by the side of test tube. Appearance of a white or creamy precipitate indicates presence of alkaloids.

To 1 ml of the extract, few drops of Wagner’s reagent was added. Development of reddish brown colour indicates the presence of alkaloids.

To the 1 ml of the extract, few drops of Hager’s reagent was added. A prominent yellow colour indicates the test as positive.

To the 1 ml of the extract, few drop of Dragendroff’s reagent was added. A prominent yellow colour indicates the test as positive.

To 5 ml of Benedict’s reagent, 1 ml of the extract solution was added and boiled for 2 minute and cooled. Formation of red precipitate shows the presence of carbohydrates.

To 2 ml of extract, two drops of alcoholic solution of α-naphthol was added and shaken well. Later 1 ml of concentrated sulphuric acid was added slowly along the side of the test tubes and allowed to stand. A violet ring indicates the presence of carbohydrates.

To 1 ml of the extract, add equal quantity of Fehling solution A and B were added. Appearance of red precipitate indicates the presence of sugars.

To 2 ml of the extract, 2 ml of Barfoed reagent was added and mixed well. It was heated for 1-2 minute in boiling water bath and cooled. Formation of red precipitate

Indicates the presence of sugars.

Test for Protein and Amino Acids

To 2 ml of the extract, few drops of Million reagent was added. A white precipitate

Indicates the presence of proteins.

To the 2 ml of the extract, two drops of Ninhydrin solution was added. A characteristic purple color indicates the presence of amino acids, proteins and peptides.

To 1 ml of the extract, one or two drop of 1% copper sulphate solution was added and tothis 1 ml of ethanol (95%) was added, followed by excess of potassium hydroxide pellets. The pink layer in ethanolic layer indicates the presence of proteins.

To 1 ml of the extract, add 1 ml of concentrated Nitric acid was added resulting in the formation of a white precipitate which is then boiled and cooled. Then 20% sodium hydroxide in ammonia was added. Orange colour indicates the presence of aromatic amino acids.

2 ml of extract was dissolved in the solution of pyridine. Then sodium nitroprusside was added, to make it alkaline. The change in the colour from yellow to orange was not observed, which indicates the presence of glycosides.

To 1 ml of the extract, 1 ml of sodium picrate solution was added. The colour from yellow to orange reveals the presence of glycosides.

To 1 ml of extract, few ml of sulphuric acid was added, boiled, filtered and extracted with chloroform. The chloroform layer was than treated with few ml of ammonia. The formation of red colour indicates the presence shows the presence of anthraquinone glycosides.

The extract was dissolved in acetic acid containing traces of ferric chloride and was transferred to a test tube containing sulphuric acid. At the junction, the formation of reddish brown colour, which gradually turns to blue, confirms the presence of glycosides.

To 1 ml of extract, magnesium turnings was added and 1-2 drops of concentrated hydrochloric acid was added drop wise. Formation of pink to crimson colour indicates the presence of flavonoids.

The aqueous solution of the extract was treated with 10% ammonium hydroxide solution. Yellow fluorescence indicates the presence of flavonoids.

Tests for Tannins and Phenolic compounds

Two or three granules of tin metal were added to thionyl chloride solution present in a test tube. Later 1 ml of extract solution was added. The formation of pink colour indicates the presence of triterpenoids.

The 1 ml of the extract was diluted with distilled water and the volume was made up to 20 ml. The suspension was shaken in a graduated cylinder for 15 minutes. Appearance of foam indicates the presence of saponins.

A small quantity of the extract was pressed between two filter papers. Appearance of oily stain on the presence of fixed oils.

A few drops of 0.5 N alcoholic potassium hydroxide solution was added to a small quantity of extract along with a drop of phenolphthalein. The mixture was heated on water bath for 2 hrs. Formation of the soap or partial neutralization of alkali indicates the presence of fixed oil.

1ml of the extract was dissolved in 2 ml of chloroform in a dry test tube. 10 drops of acetic anhydride and 2 drops of concentrated sulphuric acid was added to it. The solution turns to red, then blue and finally bluish green, indicating the presence of steroids.

The extract was dissolved in chloroform the extract in chloroform and equal volume of concentrated sulphuric acid was added. Formation of bluish red to cherry red colour in chloroform layer and green fluorescence observed acid indicates the presence of steroids.

Morphology Cells are rounded and refractile

CommentsCells are weakly positive for keratins

The base medium for this cell line is formulated RPMI-1640 Medium.

The designed study consists of three groups viz: Negitive control, Control, Test. In the Negative control group the cell lines were incubated with the medium for a period of 24 hours. This group was designed to rule out the possibility of any growth inhibitory effect of certain compounds of medium.

The control group was designed to rule out the effect of any residual or traces of solvent with which the extract was prepared on the growth inhibition of cell lines. Here the solvent employed was ethanol and hence it is added at the concentration of 0.1% (v/v) in distilled water.

In test group different concentrations of test extract i.e, 10, 25, 50, 75 and 100µg/ml are incubated with colo 320 cell lines for a period of 24 hours. This group was used to study the effect on cell line viability.

1. An aliquot of cell suspension being tested for viability was centrifuged for 5 min andsupernatant was discarded. The size of the aliquot depends on the approximate number of cells present. The aliquot is taken such that it contained a convenient number of cells to count in a haemocytometer when suspended in 1 ml PBS and then diluted again by mixing with 0.4% Tryphan blue (e.g., 5 ×105 cells/ml).

2. The cell pellet was resuspended in 1 ml PBS or serum free complete medium. Serum proteins stain with Tryphan blue and can produce misleading results. Hence determinations must be made in serum-free solution.

3. Mix 1 part of 0.4% Tryphan blue and 1 part cell suspension (dilution of cells) cells were mixed and allowed to incubate at room temperature for approximately 3 minutes, Cells were counted within 3 to 5 min of mixing with Tryphan blue, as longer incubation periods will lead to cell death and reduced viability counts. Mixing was performed in a well of a microtiter plate or a small plastic tube using 10 to20 µl each of cell suspension and Tryphan blue.

4. A drop of the Tryphan blue/cell mixture was applied on to haemocytometer. The haemocytometer on the stage of a binocular microscope and cells were focused clearly.

5. The no. of unstained (viable) and stained (nonviable) cells were counted separately in the haemocytometer.

COLO 320 cells were cultured to reach the 80-90% confluency using RPMI 1640 medium. After reaching the desired confluency, culture was collected and centrifuged at 3000 rpm for 10 minutes to get cell pellet. The pellet was resuspended in 1ml of fresh culture media. Cell concentration was determined by Tryphan blue assay was performed by mixing 50 µlitres of culture and 50 µlitres of 0.4% tryphan blue dye. Finally cells seeded in 24 well plates at the concentration 10000 cells/ml and incubated at 5% co2 incubator at 370 c for 24 hours.

Cells were maintained in 24 well plates in triplicate for every concentration, and treated with different concentrations of (10, 25, 50, 75, 100µgm). Corallocarpus epigaeus L, test compound and control groups were treated with medium and ethanol. The treated cells were incubated for 24 hours in 5% co2 incubator at 370c.

After 24 hours incubation the cells were collected from each well in eppendroffs and centrifuged at 3000rpm for 10 min to get cell pellet, to the pellet 50µlit of each medium and tryphan blue was added and mixed well to suspend the pellet. Cytotoxicity was screened by performing tryphan blue assay. Percent of growth inhibition was calculated by using the following formula

This assay is based on the capacity of mitochondria succinate dehydrogenase enzymes in living cells to reduce the yellow coloured watersolublesubstrate3(4,5dimethylthiazolyl)2,5diphenyltetrazoliumbromideintoaninsolublepurplecolouredformazanproductwhosecolouredismeasuredbymeansofELISAreaderat540nm.Onlyviablecellswithactivemitochondria reducesignificant amountsof MTT, since reduction of MTT can only occur in metabolically active cells. 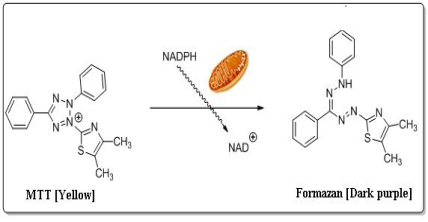 Figure 13: Reduction of MTT to a formazan compound by mitochondrial Enzymes

Human colorectal adenocarcinoma- colo 320were obtained by sugen Life Sciences Pvt. Ltd., Tirupati from an authenticated supplier. Stock culture of these cell lines were cultured in RPMI -1640 with 10% inactivated newborn bovine serum, Penicillin (100 IU/ml), Streptomycin (100µg/ml)) under humidified. The cells were dissociated in 0.2% trypsin and 0.02% EDTA in phosphate buffered saline solution. The stock culture was grown in 25cm 2 tissue culture flasks and cytotoxicity experiments were carried out in 96 well microtiter plates.

The percentage of growth inhibition was calculated using the following formula,

Values of absorbance were converted into percentage of residual viability. Usually the Inhibition concentration 50% (IC50) is chosen as the best biological marker of cytotoxicity. The IC50 value represents the concentration of the test extracts that reduced 50% of cell inhibition.

IC50 was calculated by linear interpolation method using the formula

Where A = The first point on the curve, expressed in percent inhibition, that is less than 50%

B = The first point on the curve, expressed in percent inhibition, that is greater than or equal to 50%

C = The concentration of inhibitor that gives A% inhibition

D = The concentration of inhibitor that gives B % inhibition