Profiling of Human Hairs using FTIR Spectroscopy and Chemometrics Technique. This research is about classifying human hair (subjects) using FTIR and Chemometrics. The subjects should be Malay, Woman and included in one of the age group required. (20-30, 31-40, 41-50, >60)

Human hair is α- keratin proteins and contains DNA which are collected as physical evidence in a crime scene. It can provide important information in assisting an investigation. Usually, the evidence (fiber) is obtained by physical contact between perpetrator with victim or/and perpetrator with surrounding or/and victim with surrounding. This theory is based on ‘Locard’s Principle of Exchange’ which states that “every contact leaves a trace”.

In addition, there is not enough data on human hair. There had been a research in differentiating human hair according to the race. Thus, to create additional data about human hair this research will be conducted on different age group. The subjects for this research should be Malay, woman and is included in one of the age group required (20-30, 31-40, 41-50, >60). 200 subjects will be needed and 50 subjects per age group are required.

Hair sample will be taken from these 200 subjects and will be examine using FTIR- Fourier Transform Infrared Spectroscopy method. The data obtained will be analyze using Chemometrics.

Hair starts from its root embedded in the follicle, through the dermis, epidermis, stratum corneum, skin, into a shaft and stops at the tip end. Human hair is usually 15-100µ in diameter. There are three major of regions in human hair that are identifiable using FTIR-ATR (Figure 1). The core or medulla which is 5-10µ in diameter is being wrapped by cortex which makes up the bulk of the hair. The outermost layer of hair is known as cuticle which it thickness is less than 5µ. (Feughelman M.et al., 1997)

The external layer of the fiber which consists of flattened overlapping scales is known as cuticle (Figure 2). Cuticle stabilizes the hair. 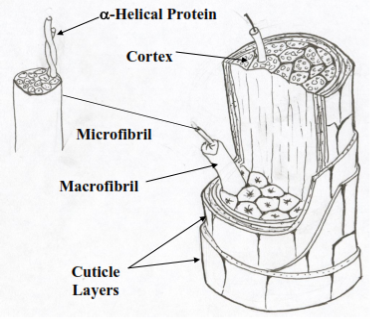 Figure 2: Schematic diagram of illustrating the morphological of a human hair fiber

Cuticle cell is separated by the cell membrane matrix (CMM) which is a strong adhesive layer. The CMM is made up of a central, polysaccharide δ-layer in between two β-layers (lipid rich). Distinct layers, epicuticle, A-layer, exocuticle, and endocuticle can be found in a mature cuticle cell. The distinct layers have different levels of proteins, lipids and carbohydrates. Epicuticle is approximately 80% protein and 5% lipid and it is chemically resistant. The A-layer resists physical and chemical forces and is cystine rich (30%). An illustration of the cross section of developed cuticle cell is shown in figure 3. (Jolles P. et al., 1997) 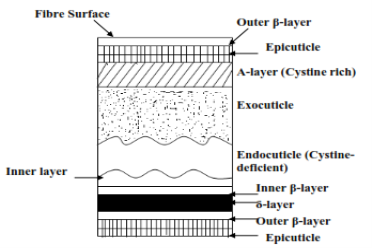 Figure 3: A schematic diagram of the developed cuticle cross section.

Cortex is covered and surrounded by cuticle. Cortex is responsible for the mechanical properties of the fiber. It is composed of elongated, spindle-shaped cortical cells packed closely that are parallel oriented to the axis of the fiber. Cortical cells are typically 100µm in length and 5µm in width aligned along the axis of the fiber. It is made up by fine micro fibrils that are comprised of α-helical proteins. Macrofibrils (approximately 100-400nm in diameter) is made up of grouped microfibrils which are 7nm in diameter. 60 % of the cortex (by mass) was made up by macrofibrils which were embedded in an amorphous protein matrix. (Jolles P. et al., 1997)

Medulla is the inner part of the hair fiber. It is also known as core with a diameter of 5-10 µm. The medulla may be completely absent or a double medulla may be observed. It has high lipid content (citrulline). The structure of medulla has a porous structure formed by sponge-like keratin ad some vacuoles filled with air resulting from the differentiation process. The medulla was separated from cortex by CMM. (Jolles P. et al., 1997)

Keratin is a part of fibrous structural proteins and is the important material making up the outer layer of human skin and it is also key structural component of hair and nails. In a single fiber, keratin constitutes about 85% of the mass. Condensation of L-amino acids formed polypeptide chains which were contained in high molecular weight polymer (keratin). Peptide bond (links the amino acid) was formed through the condensation. Multiple condensations will produce polypeptide chain which becomes the backbone of the α-keratin fiber. The reaction was shown in Figure 4:

The side chains (R1 and R2 group) of the amino acid residues for α-keratin are corresponded to different age group. (Feughelman M.et al., 1997)

3.3.1 What is Forensic and Trace Evidence?

Forensic was derived from Latin word forensic which is “of or used in courts of law”. It also denotes the application of scientific methods and techniques to the investigation of crime. Forensic involves trace evidence which can also be defined as physical evidence of minute in the form fiber (textile, human or animal), soil, glass, fingerprints and tons other that needed to be analyze under microscopic comparison. The presence and recovery of trace evidence is crucial to help in an investigation. DeForest states that “trace evidence has an important role to play in both the investigative and adjudicative phases of a case”. ‘Locards Principle of Exchange’ stated that “every contact leaves a trace” is a fundamental theory on how trace evidence could exist in the crime scene. (Fido M. et al., 2003)

3.3.2 The Importance of Hair (Fiber) as Evidence

Hair and fibre is important in providing valuable information in identifying the assailant or attacker. The discovery of hair evidence can help in distinguish race and sex. Even though hair is benign dead matter it still contains DNA to be extrapolated. Human hair is usually found in the crime scene as shown in Table 1. It can be naturally shed (normal hair-growth cycle) or forcibly remove. (Robbins C.R., 1994) 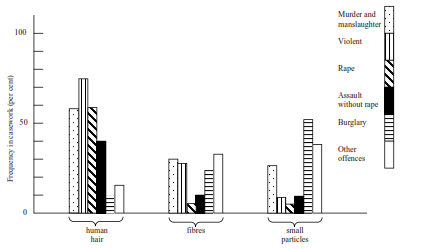 Table 1: Histogram of the relationship between the frequencies with different types of trace evidence occurs in criminal cases. (Broad J., 1988)

Stereomicroscope, compound light/polarizing microscope, transmitted light comparison microscope and the laser confocal microscope are four types of microscopes used to examine the hair fiber (evidence). Through light microscope and stereomicroscope, racial origin, species and the somatic (body location) origin can be determined. The scanning laser confocal microscope is used to analyze the transverse cross-section which is important in determining the somatic origin or ethnicity. Comparison microscope is used for next step by comparing the evidence with known fibers from suspect. Conclusions are drawn from all these observations and analysis. (Ogle Jr. R. R. et al., 1999)

Scanning Electron Microscopy can be used to analyze trace physical evidence (fibers, paints, glass and gunshot residues. SEM highlights the surface topography of the external cuticle layer in great detail with greater depth of field than a stereomicroscope. (Taylor et al., 1971) SEM is more preferable than Optical Light Microscopy. SEM can identify the species of the fiber evidence. It can differ human fiber from animals or wools or etc. But, “SEM is difficult for comparison of human hairs because the variability in the surface topography, distribution and appearance of the scales within one head are great, according to the natural and cosmetic history”. Thus, SEM also lack in aiding the investigation involving human hair as evidence. (Kupferschmid T.D. et al., 1994)

DNA (Deoxyribonucleic acid) is human genetic code which no one will have the same. DNA is in the cell nucleus and in extra-nuclear organelles of the cell, known as mitochondria. It is responsible in determining our physical characteristics. (Davis C.L., 1998) In hair, there are two sources of DNA traces that can be analyze for forensic purpose which can be found at follicular tissue and the cells on the hair root. The hair that was forcibly removed from head has its root attached. However, most human fiber that found in the crime scene (ca. 90%) is in telogen phase (naturally shed) therefore the hair does not contain a growing root. There are three types of telogen hair:

Hair roots that have soft tissues attached contain some cell with nucDNA. A study was conducted to investigate the nucDNA content in anagen versus telogen hair fibers. No nucDNA copies were detected in the shed hairs while the plucked hair contains an average 25,800 nucDNA.(Andreasson et al.,2006) In 2001, a series of single Short Tandem Repeats (STR) typing steps and during consecutive polymerase chain reaction (PCR), DNA that had been extracted from the hair was fixed onto a membrane. (Hellman A. et al., 2001) In 2010, a proposal of a new screening test to visualize DNA with 4-6-diamidino-2-phenylindole (DAPI) which is a fluorescent molecule that binds on the double-stranded DNA, between A and T base pairs. The visible nuclear DNAs can be count with the use of a fluorescence microscope and it can quickly discard hair that is less suitable for STR-typing. Thus, the attention was given to hair with highest potential for results. (Bourguignon et al., 2010)

Fourier-transform Spectrometer is used in infrared absorption spectroscopy. Fourier-transform is a mathematical process. The term Fourier-transform infrared spectroscopy is originated from the fact that a Fourier transform is needed to convert the raw data into the actual spectrum. Dispersive spectrometer which measure intensity over a small range of wavelengths at a time is different with FTIR spectrometer which simultaneously collects spectral data in a large spectral range. Thus, FTIR is more preferable. Figure 5 show a diagram that represents Michelson interferometer. From a broadband source a radiation strikes the beam splitter. Some the light is transmitted to a stationary mirror and some of the light are reflected to a movable mirror and the moving mirror is not in phase. A pattern called an interferogram which contains all the frequencies that make up the IR spectrum was produce by interfering constructively and destructively. The interferogram can be decomposed into its component wavelengths which will resulted in a plot of intensity versus frequency. (Griffiths P.R. et al., 1986) 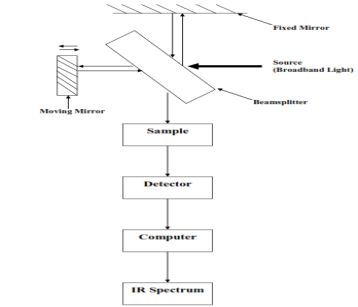 Chemometrics is the chemical discipline that uses statistical or mathematical methods to chemical data while forensic science is a discipline that formulates conclusions on a purely objective basis. It is compulsory for forensic scientist to follow strict and rigid statistical protocols in reaching a conclusion regarding analytical data. Thus, chemometrics is vital as it is capable in generating multidimensional data. By using chemometrics conclusions of research and analysis data can be obtained. (Bereton R.G., 2003)

Chemometrics research can cover various areas of different methods and can be used in chemistry. There are methods for:

Chemometrics helps in building a connection between the techniques and their application in chemistry. (Beebe K.R. et al., 1998)

These days when a crime occur it is hard to find the perpetrator due to lack of evidence. Although there is evidence but, there is no data that is available to describe the perpetrator. For an example, human fiber or hair can be found in crime scene. However without the data, the hair which is also evidence can’t be identified. Furthermore, there is no research in finding whether there is difference in human hair of different age group. Moreover, can FTIR and chemometrics helps in profiling human hair research.

There are several aims or objectives that this research holds: