Throughout history, scientists have continually searched for a way of arranging elements in a logical order that shows the similarities and differences between their properties. The Periodic Table of today lists elements in order of atomic number (which is the number of protons a specific element has). Whilst historically, many scientists have tried to arrange the elements in increasing mass order but have found that the arrangement never quite works. There were many people who helped create what is now The Periodic Table, but there are three key scientists who heavily influenced what we see as The Periodic Table today. These scientists are John Newlands, Lothar Meyer and Dmitri Mendeleev.

John Newlands was an English chemist who is now well known for his early contributions to The Periodic Table as he was the first person to arrange the elements in order of their atomic masses. Newlands arranged the 56 known elements of the time in increasing order of their atomic masses and found that in each column (now known as a group), the elements possessed similar properties to one another. He called this the octaves rule as he compared it to ‘octaves’ in musical theory. His rule was published in 1865 and stated that ‘any given element will exhibit analogous behaviour to the eighth element following it in the table’ (Wells, 2016).

However, his rule only applied up to the element of Calcium. After Calcium, every eighth element did not share properties with the first and, elements that were later discovered did not fit the octaves pattern (Helmenstine, 2018). This is shown in figure 1, where the elements (represented by musical notes), begin to ‘jump around’ after the element of Iron (Fe). 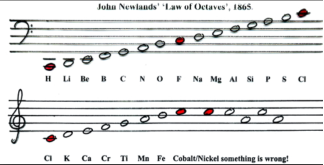 Figure 1: John Newlands ‘Law of Octaves’, put forward in 1865. The red ‘notes’ resembling each octave in Newlands classification of the elements known at the time. (“Periodic Table Database”, n.d.)

Newlands Law of Octaves had another critical error, the placement of two elements in the same position on his table. This  was ridiculed by many of his colleagues, and the Society of Chemists did not accept his work for publication. It was not until 1998 that the Royal Society of Chemistry truly recognised his works (“Development of The Periodic Table”, 2018).

Following Newlands example, a German scientist named Lothar Meyer began to create his own ‘periodic classification of chemical element’. Meyer wrote and published a book “Modern Chemical Theory”, (1864) which proposed a ‘scheme’ for the arrangements of the 60 known elements at the time. In this scheme, Meyer arranged the elements by atomic mass (like Newlands had done previously), however, he also discussed the relationship between atomic mass and the properties of an element. In 1868, he expanded on his ideas and published a Periodic graph in 1870. This graph showed the relationship between atomic volume and atomic number (as shown in figure 4). His graph displayed the relationships between elements with the first element of each period (in the modern Periodic Table) as a peak, and as the groups went along, the peaks becoming slightly higher. However, his work was not fully recognised at the time since another scientist had created a very similar classification of the elements and published it a year before Meyer (in 1869). This man was Dmitri Mendeleev. 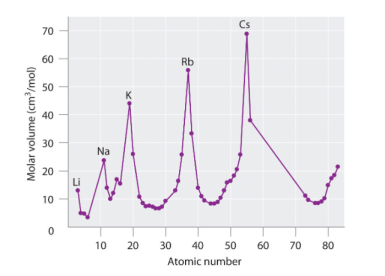 Figure 3: Variation of Atomic Volume with Atomic Number from Meyers graph published in 1870. Created before noble gases, therefore the peaks correspond to the alkali metal group. (“Development of the Periodic Table”, 2018)

What made Mendeleev’s Periodic Table so much more ‘brilliant’ than Meyers, was the inclusion of elements that did not exist at the time. He kept blank spaces within the table for elements would later be discovered (these predicted elements are signified by a ‘dash’ (-) in Figure 3). He made the bold decision that there must be certain elements with specific properties that fill in the gaps where the table isn’t quite fitting together right. Based on the position of these unknowns, he was able to give its mass, physical properties, melting point, etc (TED-Ed, 2012). He could predict all this from the understanding of how the elements around this behaved. He named some of these predicted elements eka-boron, eka-silicon and eka-aluminium (SKY HI-TECH, 2016). These elements are now known as Gallium, Scandium and Technetium respectively.

When noble gases were later discovered, they were originally placed on the left-hand side of Mendeleev’s table, and did not disrupt the order he created (“Dmitri Mendeleev”, n.d.). 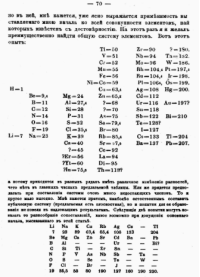 However, Mendeleev’s Periodic Table still had some demerits: the table had no fixed position for Hydrogen (due to the fact that it both halogen and alkali metal properties); and some elements did not possess the same properties as the rest of the group (e.g. Manganese had different properties to the rest of its group but was still placed there) (SKY HI-TECH, 2016).