Fire and Explosion are the most prevalent accidents at chemical and process industries which can cause serious damage to properties and loss of productions. Fire and explosion hazards are considered as the first and second major hazards in chemical industries [1]. Besides that, release of toxic materials are prevalent accidents in process industries too. Among these three, fire is the most common but explosion is more significant in terms of its damage potential, often leading to fatalities and damage to property [2]. Also, fire can cause human fatalities, serious injuries, financial losses due to damage of equipment and disruption of productive activity, loss of employment and sometimes irreparable damage to the environment and also other costs such as insurance premiums would increase. Hence, identification of danger factors and the ways of controlling fire and explosion accidents in such these industries are very important [3]. In this paper, the hazard of fire and explosion accidents at processing sections of a combined cycle power plant using one of the well-known hazard index which is called Dow fire and explosion index, has been estimated. The under studying power plant is comprised process unites and facilities such as gas units, vapor units and hydrocarbon storage site. Natural gas and Gasoline are the main chemical materials that are used and stored in these facilities which consume in Turbine units as fuel to produce electrical energy. The Dow Fire and Explosion Index (hereafter called the DOW Index) is a common hazard index [4]. Hazard indices using the numerical values to classify the various sections of process industries in the terms of fire and explosion and identify process areas with a high risk and estimate the losses due to fire and explosion. However quantify risks in different sectors of the industry make it easy to interpret the results [5-7]. The Dow index has been used in many researches across the world. Among those are the studies of Gupta et al. (1997), Roy et al. (2003), Bernatik and Libisova (2004), and Suardin et al. (2007) [8-12]. These researches showed that this index has been used for different purposes such as rating and classifying the danger, determining the economic impacts, and designing safe processing industries too. Suardin et al. concluded that by applying the (F&EI) index, it is possible to design safer and more economical reactor and distillation system [13]. This index has been also used in a number of studies in Iran, especially in the chemical industries. The research of Atrkar Roshan et al. (2013), Jafari et al. (2012) and also Ahmadi et al. (2008 & 2012) are some examples [13-16]. In this study, the fire and explosion hazards of some process units at a combined cycle power plant using Dow index has been estimated. 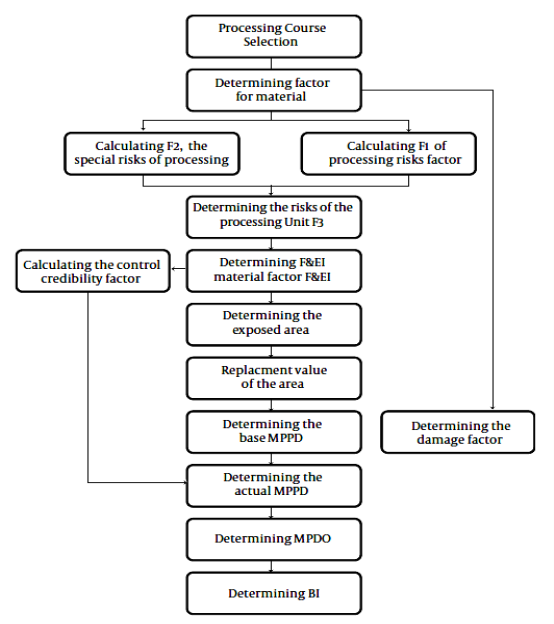 The Dow F&EI is calculated from equation (1):

Where MF (Material Factor) is a measure of the potential energy released from the fire or explosion produced by combustion or chemical reactions. It is determined by considering the flammability and reactivity of the materials that are exist at process unit and has a range of 1±40 [4, 5]. F1 (General process hazard factor) is a measure of reaction and process unit characteristics such as exothermic or endothermic reactions, handling or transfer of chemical materials, outdoor or indoor units, access condition in emergency situations, drainage and spill control at process unit. F2 (Special process hazard) is a measure of chemical material and operations specifications such as toxicity, amount of flammable materials in process or storage unit, use and distance to fired equipment, dust explosion, extreme pressure or sub-atmospheric pressure, equipment’s corrosion and erosion, leakage-joints and packing, rotating equipment and etc. Each item is represented in terms of “penalties” and “credit factors” [14]. F3 (Process unit hazard factor) is derived from the multiplying the F1 and F2 values. According to the value of the calculated index, the fire and explosion hazard of a pertinent process unit is rated as light, moderate, intermediate, heavy or severe which are shown in Table.1 [5].

After the calculation of Dow index, F&EI will be able to determine the radius and area of exposure to fire and explosion incidents using equations (2) and (3):

Loss Control features should be selected for the contribution they will actually make to reducing or controlling the unit hazards being evaluated [5]. As well as the Damage Factor is determined from the Process Unit Hazards Factor (F3) and the Material Factor (MF) and referring to Figure 2. Damage Factor represents the overall effect of fire and blast damage resulting from a release of fuel or reactive energy from a Process Unit [5].

The replacement value of the equipment within the exposed area in combination with damage factor can be used to derive the Base maximum probable property damage (Base MPPD) [4]. The actual maximum probable property damage (Actual MPPD) is then calculated by multiplying the Base MPPD by loss credit control factor which is shown in equation (5). The Actual MPPD is used to predict the maximum number of days which is the time required to rebuild the plant to its original capacity, the Maximum probable days outage (MPDO). The MPDO is used to estimate the financial loss due to the lost production: the Business interruption (BI) [18]. BI is the lost profit to the company due to an incident and is calculated by the equation (6):

Where VPM is the value of production per month. 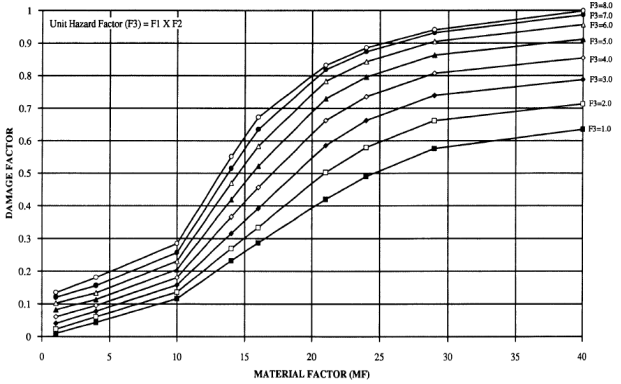 Methane as fuel in Turbine unit with the material factor of 21 had a highest material factor among chemical materials that were presented in process units and subsequently based on the result of Dow index value of 321, it can be indicated that Turbine unit with Methane as fuel, had the highest degree of fire and explosion risk (as mentioned in Table 3 which is considered severe). For Turbine unit with Methane fuel, radius exposure and area of exposure were calculated which are 82.2 m and 21227 m2, respectively. Also for this unit, value of area of exposure was estimated 13.8 US million dollars and damage factor is gained 0.83. After that, Base MPPD by multiplying the value of area of exposure and damage factor is derived which is 11.45 US million dollars. Loss control credit factor is estimated 0.36 which by multiplying it into Base MPPD, Actual MMPD is derived 4.12 US million dollars. Maximum probable days outage for this unit is estimated 50 days and finally the loss due to unit pauses (BI) is calculated 3.03 US million dollars.

After that, when Turbine unit uses gasoline as fuel has the second risk ranking with Dow index value of 236 and

Gasoline storage site with Dow index value of 56.8 was the least which is ranked as light fire and explosion risk.

Table 3: The Fire and Explosion Index Ranking at Under Studying Units

2.Khan, F.I. and S. Abbasi, Major accidents in process industries and an analysis of causes and consequences. Journal of Loss Prevention in the Process Industries, 1999. 12: p. 361-378.

[1] Methane is the major component by more than 96 % Concentration of Natural Gas which is consumed as fuel at Turbine Unit in hot seasons of year, alternatively. Hence the MF of natural gas was determined from Methane which has the highest MF value.