This proposal describes a research project to synthesis the ionic liquids; the alternative green, non-volatile solvent to harmful volatile organic solvent and chemical industries in the future. The ionic liquids, whose properties can be predicted before their synthesis. The already known properties enable to gain required result for different applications. This has versatile the range of applications of Ionic’s liquids. The properties of I.Ls are affected by a no. of factors such as lattice energy, electrostatic potential between cation and anion, charges of ions, separation between the charges, symmetry & hydrophobicity. Currently scientists are working not only on synthesis of new ionic liquids but also elevating their applications in different fields including solar cells, lubricants, green organic solvents etc. Because of significant properties attributed to these new classes of compounds, which have been classified as new compounds only a decade ago, we started studies towards the synthesis of ionic liquids. We attempted to prepare different types of ionic liquids. i) Imidazole based ionic liquids ii) Caffeine based ionic liquids.

“The term ionic liquid implies a material that is fluid at (or close to) ambient temperature, is colorless, has a low viscosity and is easily handled.” (Sheldon)

“Ionic liquid is a salt with a melting temperature below the boiling point of water.” (Wilkes)

The properties of the ionic liquids are mentioned below.

In this knowledge era, science has changed our world by discovering new methods to be the beneficial for human being but simultaneously it also pollutes our environment. Therefore these methods and chemicals have also become somehow harmful to the human beings. So this is how, these chemicals, which polluting our environment have become a problem for the common people. Organic solvents are widely used in the laboratory and industries, which are volatile and used in huge amounts, i.e. Solvents are the most damaging chemicals. That is why, our research project is about finding some green alternative to the most damaging solvents. The new alternative solvent will be non-volatile, less toxic, biodegradable, air and moisture stable and economically viable to large scale process.

We have prepared project to give alternative solution to above mention problems. After synthesizing the green non-volatile, non-toxic solvent, the pollution could be reduced to great extent. Not only this, ionic liquid may have a lot of benefits and may be used as in batteries, propellants, lubricant, storage media for toxic gases, performance additives in pigments and many more.

Room temperature ionic liquids are generally salts of organic cations, e.g. tetraalkylammonium, tetraalkylphosphonium, N-alkylpyridinium, 1, 3-dialkylimidazolium and trialkylsulfoniumcations. Imidazole has a unique property to stabilization a positive charge on nitrogen that’s why we use it as a substrate. Two nitrogens in imidazole stabilize quaternary nitrogen charge therefore the weaker the charge so it form ionic liquid which is liquid in room temperature. General reaction of imidazole based ionic liquid is 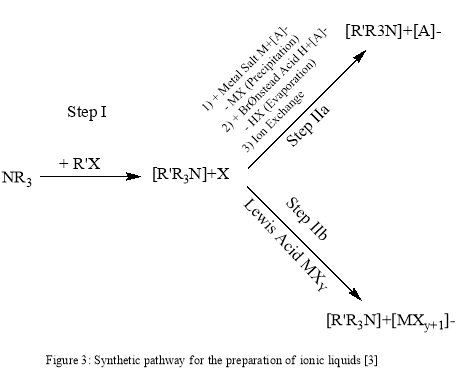 Caffeine has been chosen due analogy of its structure with imidazole. Since five membered-ring that is fused with a six membered ring possessing amide and imide moieties, must behave like imidazole which has extensively been used in the synthesis of ionic liquids. For this reaction, first we prepared alkyl caffenium halides by treated of caffeine with different alkyl halide (i.e. methyl iodide, ethyl iodide and hexyl bromide) and taken tetrahydrofuran as a solvent, alkyl caffenium halide is obtained as a white crystals. We also tried to prepared caffeine based ILs due to its similar analogy structure with imidazole. Caffeine is relatively less expensive and is easily available in abundance. ILs become cheaper and its applications enhanced due to the use of caffeine.

It is reported in literature that Nitrogen containing heterocyclic compounds are used to generate stable carbenes, which were then used to carry out different reactions. One of such reaction is benzoin condensation that may be carried out using carbenes.

Ionic liquids are defined as molten salt composed entirely of ions without any neutral molecules and having low melting point (usually ~100ËšC). The chemical and structural composition of an ionic liquid (molten salt) depends upon its melting point. Lowering of melting point is due to the low symmetry of cation and weak intermolecular bonding. By keeping the cation constant we can also use different anions which can affect the melting point. The melting point decreases with increase in the size of anion. [3]

Ionic liquid have no measureable vapour pressure due to this property it can easily separated from reaction mixture by distillation. The thermal stability of an ionic liquid is directly related to the strength of the heteroatom-carbon and heteroatom-hydrogen bonds. Ionic liquids formed from either protonation of amines or phosphanes show significantly restricted thermal stability. [3] 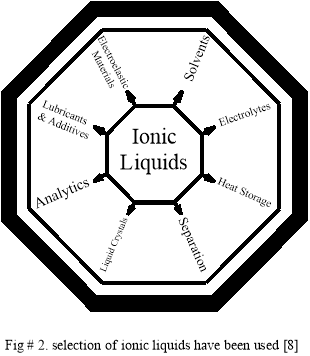 The most common classification used to describe a solvent is polarity of that solvent. Ionic liquids are considered as polar solvent by nature because they can dissolve and stabilize dipolar or charged solutes. [3] They have tendency to dissolve many different many other materials such as organic, inorganic and organometallic materials. [1]

Ionic liquids are attractive, useful, advanced solvents that are a sight of attention by the renowned chemists for its unique and distinct properties. Its tunable components provide a wide range of successful and desire products. 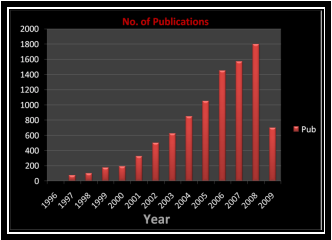 Figure2.IL publications (on May 27, 2009) determined from the ISI Web of Science in the last fourteen years.

As soon as this project is funded, we import chemicals in first two months while start synthesizing with the available chemicals. Within a one year Insha’Allah, we will complete synthesis about 50 ionic liquids and also check their applications.

The evaluation will be conducted by PCSIR and HEJ Research institute. This evaluation will be done under the direction of Dr. Nasir-Uddin who has much experience as a professional program evaluator. He had also done the evaluation of several large-scale governmentally funded projects. All chemists already have the experience on this research topic. Every experiment will be done under the supervision of Dr. Imran Ali Hashmi, Ph. D from German on synthetic chemistry.

Thesis submitted for the degree of Doctor of Philosophy by Robert Christopher Harris, University of Leicester, 2008