The functionalization of multiwalled carbon nanotubes with different drugs

In our days currently available technologies have made significant advances in cancer research, but proper treatment remains elusive. According to the report issued by the World Global Health (WHO) it is estimates that the incidence of new cancer cases increase by more than 10 million each year and the rate of deaths caused by this disease is over 6 million per year [1]. The most common cancers causing death are listed as WHO: lung cancer, stomach, liver, colon and breast cancers. Carbon nanotubes (CNTs) possess properties for the development of advanced drug delivery systems, including their very large surface, which allows multi-conjugation of various molecules on the side walls.

Molecules that contain aromatic groups may be easily covalently linked to strong interactions CNTs. 1-D functionalized CNTs (F-CNTs) could improve the binding of a single cell interaction via multiple binding sites, due to their flexibility. Clinical practice guidelines such as those from the American Society of Clinical Oncology (ASCO guidelines on extended use of intravenous bisphosphonates in metastatic breast cancer), the National Comprehensive Cancer Network (NCCN Breast Cancer Clinical Practice Guidelines), and the NCCN Task Force Report on Bone Health in Cancer Care all recognize the positive utility of bisphosphonate as zoledronic acid (Zometa) use in palliative bone care [2-5]. However, as new classes of inhibitor agents enter the metastatic cancer palliative it is important to understand how palliative care treatment modalities are used outside of the clinical trial setting. In this idea the present research is an investigation of a multiple hybrid functionalization of carbon nanotubues with drugs, introducing as a novelty functionalization with cisplatin, docetaxel and zometa [6].

The best known method of functionalization is noncovalently modified by embedding fragments containing functionalized aromatic groups in the outer wall of CNTs through interaction π-π [7].

Multiwalls carbon nanotubes (MWCNTs) purchased from Sigma Aldrich had more than 90% carbon and 10 to 15 nm x D x L 0.1 – 10 pm, produced by catalytic chemical vapor deposition (CCVD). Oxidation of the carbon nanotubes was made using a mixture of 98% sulfuric acid (Merck). Ethylenediamine (EDA)-modifying agent was supplied by Fluka. We used saline zometa, docetaxel (Dox) and cisplatin, from pharmaceutical market, and all reagents were not further purified. In the last years there are studies in literature regarding CNTs functionalization with different drugs [8-10].

FTIR spectra of functionalized MWCNTs were registered on a Perkin Elmer, Spectrum 100 equipment in 400÷4500 cm-1 range with 4 cm-1 resolution and 32 scans.

MWCNTs (0.9 g) were dispersed in 98% sulfuric acid and ultrasonicated at 50°C for 6 h to obtain MWCNT-COOH. Functionalization of MWCNTs reduced toxicity of carbon nanotubes.

Throughout preparation process, docetaxel, cisplatin and zometa was added to carbon nanotubes. Docetaxel was difficult to absorb due to their hydrophobic characteristics. Docetaxel (5 mg) was added to a solution of MWCNT, MWCNT-COOH, MWCNT-NH2 in 1 ml of saline and 0.5 ml of anhydrous ethanol using an ultrasonic bath for 48 hours at 50 °C. The suspension was centrifuged at 10000 rpm for 15 minutes until the carbon nanotubes were fully precipitated. Cisplatin (2 mg) was added to solutions that contain MWCT, MWCNT-COOH and MWCNT-NH2 in 1 ml of saline and was sonicated for 48 hours at 50°C and filtered.

The remaining solids were rinsed with anhydrous ethanol and deionized water to remove the excess of docetaxel and zometa.

FTIR spectroscopy is a very useful tool to show the presence of functional groups on the surface of MWCNT-COOH an MWCNT-NH2.

The bands allocated to groups: -OH, -CH2 and amino in the four samples are almost identical.

Morphology of nanosized particles are investigated by transmission electron microscopic analysis (TEM). From this analysis shown in Fig. 3 it is evidenced the surfaces of MWCNTs functionalized with carboxyl CDDP, Dox and zometa. MWCNTs have a curved shape about 10-20 nm in diameter and a length of 0,1-10 microns. TEM images show CDDP and DOX grains of 10-20 nm in width while ZOMETA sample is spread radially from a common center at the intersection of MWCNTs. Encapsulation of drugs is well emphasized. In Fig. 4 morphology reveals multiwalled carbon nanotubes functionalized with amino group in which drugs were added (CDDP, DOX and ZOMETA).

Samples were placed in SBF for different periods of times and the solutions were analyzed. The samples were added in a nebulizer for vaporization. Conditions were selected to maximize the ion signal while platinum solution was introduced in vapors generator. The steam generated was then transported to the ICP-MS to determine platinum ions.

The largest amount of platinum ions was recorded for MWCNT-COOH-CDDP-DOX-ZOMETA as can be seen in fig.4 This value indicates that there are good possibilities for further analysis. 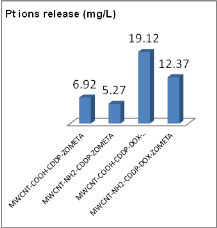 We presented a study of docetaxel, cisplatin and zometa added to MWCNTs functionalized by carboxyl and amino groups. FTIR measurements have been used for structural characterization of drugs encapsulation in MWCNTs-COOH. This functionalization (encapsulation) is confirmed by TEM analysis that shows the morphology of the samples.

CDDP release was measured by ICP-MS techniques and the amount of platinum ions was found higher in case of MWCNTs-COOH-CDDP-DOX-ZOMETA.

Acknoledgments. PhD student A. Voiculet acknowledges the financial support from the European Social Fund through POSDRU//1.5/S/…………..