Abstract: The free surface energy (SE) for a series of mono and diesters derived from poly(itaconic) acid, was determined by wettability measurements and estimated by theoretical calculations from Sugden’s Parachor. For these polymers it was observed a decreaseing in the free surface energy as the size of the chain of the alkyl groups in monoitaconates and diisoalkylitaconates increases. However, it did not allow to get values of the free surface energy comparable with experimental values, exception was for poly(2-chloroethyl diitaconate) and poly(3-chloropropyl diitaconate) where the experimental and theoretical variation was comparable. It means that the Sugden method match well for these polymers. Additionally, it was determined the free surface energy for some polymers from poly(methacrylic acid) derivatives, specifically poly(phenyl methacrylate)s (PPhMA). For these systems a decreasing in the free surface energy is observed, when a fluorine atom was introduced into the phenyl group. In general there was not a good correlation between experimental values and those estimated through the theoretical calculations. The influence of polymeric film thickness and topography on the determination of contact angle was studied for poly(phenylmethacrylate)s. The results show that the film thickness to determine contact angle must be over 254 A°.

The surface of a solid, as well as of a liquid, has an additional free energy, but due to this lack of mobility in the surface of solids this energy is not possible to measure directly. [12] It means that the free surface energy can be estimated by wettability measurements in an indirect way, as shown in Figure 1. [13,14]

An approximation to estimate the surface energy of solids is based on the interpretation of contact angle of sesil drop. 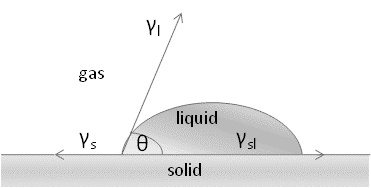 Figure 1. Sesil drop over a solid surface. The arrows represent the surface energies when they are explained like forces of surface tension.

From the schematic representation on Figure1, and considering the equilibrium state, the Young’s equation is obtained. This equation establishes a relationship between the contact angle and the three surface tensions:

The dispersion force and polar contribution to SE, γd and γp, respectively, can be calculated by using the Owens, Wendt and Kaelble method. [15-17]

The aim of this work is to obtain information about the free surface energy of several polymers with different chemical structures and various side chains. It was also interesting to clarify the inflence of the thickness and topography of the film in the determination of the SE of the polymeric systems studied.

Diisoalkylitaconates were obtained by conventional acid catalyzed esterification of itaconic acid using sulphuric acid in toluene and the corresponding acohols. [18-20]

Monoitaconates were obtained by reaction of itaconic acid with the respective alcohols under fairly acidic conditions according to the method described by Baker et al., [21,22] for lower monoesters.

Methacrylates were prepared by reaction of methacryloyl chloride with the appropriate alcohols in toluene solutions and N.N-dimethylaniline at reflux temperature during 24 h. Purification of the monomers was achieved by distillation under reduced pressure (0.5 mm Hg) as previously reported [23,24] for diitaconates and methacrylates. Purification of monoitaconates were achieved by repeated crystallization from toluene. The monomer structures and purity were confirmed by 1H-NMR and infrared spectroscopy with Fourier Transform (FT-IR). Polymerization was achieved in bulk at 340 and 350 K, depending on the monomer, using azobisisobutyronitrile (AIBN) as initiator under N2 (polymerization time 48-60 h; conversion 70%) for diitaconates, 48 h for monoitaconates; yield 35% and 10-3 w/w % of AIBN in benzene solution under vacuum in the case of methacrylates (polymerization time, 48 h; conversion 65%).

The total surface energies of the polymers were determined by wettability measurements with water, diiodomethane and ethyleneglycol. Polymers films were cast onto glass slides for optical microscopy and silicon wafer. The cast films were dried for 30 min at 393 K. The wettability of the polymer films was determined by contact angle measurements. Contact angles were measured using a contact angle system OCA by Dataphysics with a conventional goniometer and high performance video camera, controlled by SCA20 software. A syringe connected to a Teflon capillary of about 2 mm inner diameter was used to supply liquid into the sessile drops from above. A sessile drop of about 0.4-0.5 cm radius was used. The contact angles were measured carefully from the left and right side of the drop and subsequently averaged. These procedures were repeated for six drops of each liquid on three new surfaces. All reading were then averaged to give an average contact angle. All experiments were performed at room temperature.

The ellipsometer used has a polarizer, a compensator, the sample, an analyzer and a detector. The light source comes from He-Ne laser whose wavelength is 632.8 nm, that fall onto the sample with an angle of 60.65°. The analyzer remains fixed at an angle of 24.256°, and the polarizer is mechanically adjusted so that the detector does not record any signal. Silicon wafers (Silicon doped with Boron crystalline plates) were used as substrates. Pieces of 12 x 12 mm were used. The most important characteristic of these substrates, are the refractive index of silicon of 3.877 + 0.019 [25, 26] and the refractive index of PPhMA was 1.5706 [27]. Substrates were also properly cleaned and dried, being their typical polarization angle between 43.8 and 43.9°.

Preparation of films of poly(phenylmethacrylate).

Morphological analysis of surface films of poly(phenylmethacrylate) were done by Scanning Electron Microscopy (SEM). A film of PPhMA of 94 ± 10 Å thickness was prepared from a solution of 0.05 g/dL in chloroform and deposited over a silicon wafer as substrate.

Surface free energy was determined by measuring the contact angles (CAs) of water, ethyleneglycol and diiodomethane on the polymeric surfaces. The dispersion γd and polar γp contributions were calculated by the Owens, Wendt and Kaelble methods. [15,16, 28,29] The results obtained by wettability measurements of polymeric systems studied are summarized in Tables 1 to 4. In the same tables are the surface energy calculated from Sudgen´s parachor (ï§ =(Ps/V)4) for the same polymers.

In the case of poly(diisoalkyl itaconate)s it can be seen that the number of methylene groups increases the lateral chain, the calculated surface energy values decreases. This is a normal behavior because the hydrophobicity of the polymer must increase. However, it did not allow to get experimental values that present this behavior. As it is important to consider the possible errors on the determination of SE values due to the effects of the roughness and at the same time the thickness on adsorbed polymers. For this reason the film thickness was studied to clarify its influence on the measurement of contact angle.

In order to get films with different thickness the concentration of the solution of poly(phenylmethacrylate), PPhMA, was modified. Thicknesses and topography of the films were measured by ellipsometry on silicon wafer substrates. It was found a good linear correlation between film thickness and polymer concentration. (Regression coefficient R=0.98955).

Topography of the surface of PPhMA film at a thickness of 94 A° was studied by SEM micrography. It was found that the polymer is homogenously distributed on the silicon wafer substrate, showing a surface with regular porosity. This demonstrates that PPhMA film whose thickness is 94 Å, the surface is not completely cover and it produces in the measurement of the contact angle non reproducible values, due to the liquid will penetrate itself within the holes.

Determination of surface free energy for PPhMA was performed at different film thickness. It was observed that for films thickness of PPhMA greater than 245

13 Aº there is a better reproducibility in the values of contact angle obtained. The SE values are shown in Table 6.

Poly(monoitaconate)s with large lateral chains as poly(monodecylitaconate) and poli(monododecylitaconate), it was found that the surface free energy decreases as the length of the alkyl group increases. It allows concluding that the polymer increases its hydrophobic character, as its lateral chain increases. It is in agreement with its chemical structure. The surface free energy calculated through the Parachor parameter, for the poly(monoitaconate)s studied, decrease as the lateral chain increases its size.

For polymers poly(2-chloroethyl diitaconate) and poli(3-chloropropyl itaconate), the variation of experimental and theoretical surface free energy was slight. It will imply that Sugden method is well fitted for those polymers.

For poly(phenylmetacrylate), the results showed the film thickness, needed to determinate the contact angle, need to be higher than 245

The difference in the measurement of surface free energy between those experimentally determined and those estimated since Parachor, are related to the complexity of the monomeric structure. It is likely that the volume of each group or atomic unit would be influenced by interactions of neighbor atoms within the monomeric unit. Therefore calculations of surface free energy based on the table of structural contributions of Sugden’s Parachor would not fit at the experimental values.

Acknowledgements. DR and AL. thanks to Fondecyt 1120091 for parcial finantial support.

Table 6.Values of the surface free energy for poly(phenylmethacrylate) at different