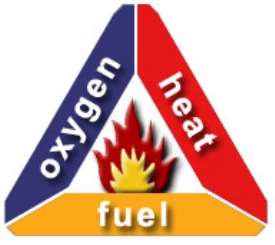 Here is a diagram of the fire tetrahedron.

This diagram shows the three elements that have to be present in order for a fire to occur. Combustion only occurs when flammable vapours are mixed with oxygen and are ignited by a spark or flame.

A fuel is any substance that can undergo combustion such as wood, plastics, rubber, fabric, petrol, cooking oil, nail vanish remover, butane, natural gases and propane. This is needed to fuel the fire.

Organic fuels contain carbon hydrogen and oxygen in varying ratio’s in some cases, nitrogen will be present such as wood, plastics, gasoline, alcohol and natural gases.

Inorganic fuels contain no carbon and include combustible metals such as magnesium or sodium.

Oxygen is need for a fire to begin because when oxygen in the air combines with flammable vapours given off by fuels they create a form of heat at a molecular level.

Heat is produced in a fire when oxygen and flammable vapours from the fuels combine, once this happens a source of ignition is the needed to cause it to combust.

Ignition is “the act or process of initiating combustion.” (dictionary.reference.com, 2012).

A primary source of ignition is when you expose a flammable object to an open flame and causes fire directly.

Here are a number of primary sources of ignition;

A secondary source of ignition is where a flammable object is heated until its burning point. During a house fire the primary source will be ignited which will then cause a secondary source to ignite which will ignite the furniture. According to the Journal of Fire Sciences “An important aspect of many secondary sources is that they frequently occur in areas where they use cannot easily be controlled or restricted.”

Examples of secondary sources of ignition are;

A fire can be extinguish if any of three components in the fire triangle that cause a fire (heat, oxygen and fuel) are removed.

To remove heat from a fire or cool a fire, water is most commonly used. Water has great heat absorbing properties. The water is able to extinguish a fire as it is able to absorb more heat than the fire is generating.

A fire can be extinguish by removing or limiting its oxygen supply. To do this it is known as blanketing or smothering. You do not need to remove all of the oxygen supply to extinguish a fire, a reduction of oxygen below 6% is sufficient enough to extinguish a fire. Examples are snuffing out a lit candle, placing a lid on a chip pan fire and closing doors and windows; if there is a fire in a room it may burn itself out.

“A fire will go out if deprived of its fuel supply. A fire caused by a gas; leak can be extinguished by turning off the gas. If pallets are stacked in the open, rather than against a warehouse wall, they will eventually burn out, leaving the warehouse and its contents out of danger.”

“Heat can be transferred from place to place by conduction, convection and radiation. Dark matt surfaces are better at absorbing heat energy than light shiny surfaces. Heat energy can be lost from homes in many different ways and there are ways of reducing these heat losses.” (bbc.co.uk, 2014)

Heat energy can move through a substances by conduction, metals are very good conductor’s heat, whereas non-metals and gases are poor conductors of heat. The poor conductors are called insulators. The heat energy is conducted from the hot end to the cool end of an object.

Infrared radiations is a type of electromagnetic radiation that involves waves instead of particles unlike convection and conduction. Due to this radiation can even work through the vacuum of space. This is why we are able to feel heat of the sun even though it is 150 million km away from the earth.

House fires are fires that break out within the home and there are many different causes for them such as;

A house fire could spread by either conduction, convection or radiation depending on which one of the above started the fire. If the fire is a small fire within the house a fire blanket or water can be used to extinguish it. If you have access to fire extinguishers a water extinguisher is good for burning paper, wood or soft furnishings, a foam extinguisher is good for an arson fire, as petrol or other fuels would probably have been used. Then a CO2 extinguisher is good for putting out fires caused by electrical appliances. If the fire has spread through most of the house and is a lot bigger, then the fire brigade would put the fire out with water. Wet chemical extinguishers were designed to extinguish fires in the kitchen involving burning oil and deep fat fryers. House fires can be prevent by being careful when using appliances, flammable liquids, candles and decorations, they could also be prevented by getting your electrics check every year or so.

Wildfires are fires that break out in the wilderness, the causes of them include;

A wildfire would generally spread by convection, as they would be in contact with an open flame which could be one of the following. A wildfire could be extinguish by a helicopter or plane throwing water over the fire from above or by the fire brigade with water, They could also be put out with leaf blowers, as this will blow the fire in the direction that it has already been meaning it has nothing else to catch fire too. Wildfires can be prevent by using fire breaks, people to comply with laws and regulations and never leave a fire unattended.

Petrol is a dangerous substance and it is a highly flammable liquid. The petrol gives off a vapour which can easily be set on fire if it is not handled safely. The causes of a petrol fire are;

Petrol fires are able to spread using conduction and convection, to extinguish these types of fires a foam extinguisher, CO2 extinguisher or a powder extinguisher is best being used. As these extinguisher will place a layer of powder or foam over the fire starving it of oxygen. These can be prevent by people not smoking or using their mobile phone at a petrol station and people comply with laws and regulations.