The objective of this lab was to successfully synthesize an ester from an alcohol and acetic acid. This experiment used 4-methyl-2-pentanol with excess acetic acid to produce (1,3-dimethylbutyl) acetate as seen in Figure 1. The mixture of acetic acid with 4-methyl-2-pentanol and sulfuric acid was refluxed, extracted, distilled and identified using IR spectroscopy. The ester had a fruity smell when obtained. The mass of the final product was 0.582g which gave a 34.6% yield. The results obtained indicated that the final product attained was the ester (1,3-dimethylbutyl) acetate due to the similar bond groups of C=O and sp3 C-H. The reason why the percent yield was low was because the nature of the reaction itself formed ether and ester and some product was lost through extraction. For future experiments, the process must be done a lot quicker in order to ensure the least amount of product evaporates.

Often in chemical labs, esters are artificially synthesized in order to produce an imitation of a flavor. An ester can be synthesized by the reaction of an alcohol with a carboxylic acid. In this experiment, (1, 3,-dimethylbutyl) acetate was formed through excess acetic acid and 4-methyl-2-pentanol as seen in Figure 1. The limiting reagent in this reaction is 4-methyl-2-pentanol so the theoretical yield of the ester product is dependent on 4-methyl-2-pentanol.

For this reaction, the reflux will be utilized. Heat is applied with a boiling chip, to allow the reaction to occur. The vapor rises and escapes from the round bottom flask and is then cooled by the water condenser. The vapor turns back into a liquid and drips back into the bottom flask. In order to remove certain compounds, the synthesis involved extraction to isolate compounds. The denser layer or the aqueous layer will be at the bottom and can be removed with a pipette. The product of ether and ester was distilled to isolate the ester because esters have lower boiling points than the ether. In distillation, the substance with the lower boiling point evaporates and reaches the water condenser. The cool temperature allows the vapor to change states from gas to liquid which forces the liquid to drip back down the into the Hickman head due to gravity. In this reaction, the (1, 3,-dimethylbutyl) acetate was isolated from an unknown ether by distilling into the Hickman head. An IR spectrum of the final product is conducted to determine the desired product by comparing the bond groups of the given values. If the IR peaks and bonds are the same as the given, then the purified product would be the ester. A percent yield will be calculated to assess the amount of ester produced.

First, obtain an empty round bottom flask and find the mass. Add about 1.5mL of 4-methyl-2-pentanol in the flask and reweigh. With the 3mL of glacial acetic acid added, add sulfuric acid with a boiling chip. Conduct reflux with the apparatus conducted in previous labs with a water condenser attached to cool the reaction. Heat the apparatus for 60 to 70 minutes. Cool the reaction mixture and while stirring, add 2-3 mL of 5% aqueous sodium bicarbonate until carbon dioxide formation ceases. Transfer mixture and shake hard. Remove the aqueous layer and repeat the separation technique two more times. Remove as much water from the organic layer by adding small amounts of sodium sulfate and let the reaction stand for 10-15 minutes. After a week, transfer the reaction with the ether and ester into a vial and conduct distillation. Conduct distillation for 15 minutes at around 180 to 200 oC. Obtain and mass the final product. Conduct IR of starting reactants and products. Clean up stations and calculate the percent yield.

Table 1: Table of masses during experiment 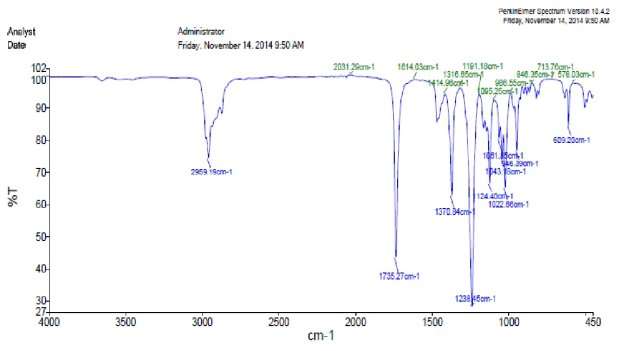 Table 2: Values of IR for ester (1,3-dimethylbutly) acetate after distillation

For this experiment, the ester (1, 3-dimethylbutyl) acetate was synthesized from acetic acid and 4-methyl-2-pentanol. However, this is not a one reaction pathway because of the tetrahedral intermediate prevalent in esterification. The addition of the acetic acid leads to a more reactive electrophile. This causes a tetrahedral intermediate in which there are two equivalent hydroxyl groups. Then one of the hydroxyl groups is eliminated, a process known as tautomerism. This then gives water and ester as the final products. The reaction was successful produced from reflux but problems arose during the second component of this experiment, distillation. The ester also had a very distinct fruity smell.

This reaction is refluxed because heat acts as a catalyst for the reaction. In the reaction pathway, the temperature is increased, allowing more geometrical collisions with the products and requires lower activation energy. This can be seen as an example of the Maxwell-Boltzmann curve. This was done uniformly by using the aluminum block at around 110 oC. After reflux occurred, a distillation apparatus was used in order to purify the ester from the ether. The boiling chip was added in reflux and distillation in order to ensure that the reaction did not overheat and burn the reaction. Boiling chips are often made from carborundum (carbon and silicon) which are chemically inert and allows sharp edges for bubbles to form which will not overheat the system. The substances in the reaction are allowed to boil more calmly rather than rapid boiling causing splatter and ruining the experiment. The water condenser was used for both in order to cool down the reaction in order to prevent burning of the reaction and ensuring that the product in the vapor state turned back into liquid state. The reason why anhydrous sodium bicarbonate was added was to ensure that any leftover water was absorbed and the remaining layer contained only the organic compounds. This was done a total of three times to ensure that minimal water was left, but some of the product leaked when shaken.

The purpose of distillation is to separate compounds based on their boiling points. The reaction mixture that contained ester and ether was to be distilled in order to obtain the ester in the Hickman head. However, after letting the reaction stand for a week, most of the ether evaporated and the mixture was mostly ester. This explains why during distillation, the mixture in the conical vial disappeared as most or all went into the Hickman head. This can be seen in Figures 2 and 3. The IR of before and after distillation have similar values, peaks, and the exact functional groups which indicates that the mixture contained only the ester. The IR spectroscopy of after distillation shows that there is a C=O bond around 1735.27 cm-1, and a sp3 C-H bond around 2959.19 cm-1 which indicates that the compound shown is indeed an ester and that the objective was met since ester do have C=O bonds around 1750 cm-1 and sp3 C-H bonds around 2900 cm-1 . Ideally, the distillation process should be useful in isolating the pure product, by allowing the ester molecules to be in a gaseous phase. Equilibrium will be established and allows the molecules to form back into a liquid phase in the Hickman head, but in this experiment distillation was not necessary. This just caused more chances of losing the ester by not fully attaining all the liquid from the Hickman head or by evaporating.

The results yielded a 34.6% yield which suggested that there were errors within the reaction. One major reason as to why the yield was low was because of the nature of the reaction itself. The ether and ester in the conical vial was left to stand for a week. Because the ether had a lower boiling point than ester, most or all of the ether evaporated due to high volatility at room temperature. In addition, the ester also has a high volatility but lower than the ether because of the structure and the strength of the intermolecular forces. The ester has two oxygen atoms whereas the ether has one oxygen resulting in lower van der Waal forces. The ether was created as a byproduct which affected the maximum amount of yield of ester produced. Therefore, not all the reaction occurred to form an ester because during that time there were compounds that hindered the maximum amount of yield formed by forming a pathway for the ether. This was from the sulfuric acid reaction mechanism to produce an ether. The sulfuric acid dissociates into a proton and a bisulfate ion which forms with the OH group of the alcohol. The alcohol’s oxygen is protonated which forms an oxonium ion. The ion decomposes to carbocation and water and the carbocation reacts with another alcohol group to form another oxonium ion. The ion loses a proton to stabilize and forms an ether. If a stronger alcohol, perhaps 1-hexanol was used, a higher yield would be attained because the stronger intermolecular forces allows the reaction to have lower volatility and the ester and ether formed would also evaporate less. Because there are weaker van der Waal forces in the (1, 3-dimethylbutyl) acetate because of the lower carbon chains, more of the product was evaporated and lost. In order to ensure that a higher yield is attained, the reflux and distillation process must be done back to back or a lot quicker before the ester and ether evaporates at room temperature. Also an alcohol with a longer carbon chain should be used as stronger intermolecular forces allow more ester to form.

While transporting the organic layers and further extraction, some of the product was lost. Even though this source of error is minimal, there were some product lost along the way by transporting through vials which affected the yield of the final product. Reflux is an effective technique that allowed Fischer esterification to occur. Distillation is a very useful technique, but should not be relevant when one of the substances evaporates due to high volatility. For future experiments, the reaction must be done much quicker in order to ensure that the least amount of ether and ester evaporates and is lost throughout the process and more precise instruments can be used to extract the organic layer. IR should still be used to discern the identity of the product. Because of the nature of the reaction itself, a yield close to the theoretical is very difficult to attain, a realistic approach would be around 60% yield.