Erythromycin drug products have been mostly imported into Nigeria from different countries of the world; with relatively no Nigeria based pharmaceutical company manufacturing same. Cases of therapeutic failures have been reported in some of our hospitals. Hence, the need arises to study some of the physicochemical parameters of some of the available drug products in the Nigerian Pharmaceutical Market with a view to detecting drug products that meet the specified pharmacopeia standards and those that fall short of such standards. The parameters measured were the uniformity of weight, friability, tensile strength, disintegration time and dissolution rate of 12 selected erythromycin stearate 500mg film-coated tablets. The tensile strength of the tablets was determined using the static loading method and Mosanto hardness tester to find the crushing strength and their results compared. The 12 samples disintegrated within 30mins with four of them disintegrating within 3mins, suggestive of possible inclusion of superdisintegrants in their formulations. All products, except two had a percentage release of the drug within 90mins of 70% and above. The friability of three of the products exceeded 1%. However, their tensile strengths did not prolong the disintegration time beyond the official limits. The results obtained from the physicochemical testing of the drug products revealed the failure of two products having release rates of less than 70% within 90mins. Further tests need to be done on these two products (namely Rycin® and Erythromycin 500mg) in order to draw a more definite conclusion.

Erythromycin stearate is the stearic acid salt of erythromycin, with an excess of stearic acid. It is a white, bitter crystalline powder, which is practically insoluble in water, but soluble in acetone and in methanol. The solutions may be opalescent 1.

Erythromycin is available as the free base, ethylsuccinate estolate, gluceptatae and lactobinnate derivatives. When given orally, erythromycin and its derivatives except the estolate are inactivated to some extent by the gastric acid, and poor absorption may result. Erythromycin is a typical representative of the macrolide group of antibiotics and is produced by Streptomyces erythreas

The tertiary amine of desosamine confers a basic character to erythromycin (pKa 8.8). Through this group, a number of acid salts of the antibiotic have been prepared. A second sugar, Clandinose, which is unique to erythromycin, is attached via a β-glycosidic linkage to the C-3 position of the lactone ring. Erythromycin stearate tablets contain the equivalent of not less than 90.0 percent and not more than 120.0 percent of the labeled amount of erythromycin (C37H67NO13).1

Clinically, erythromycin is widely used in the treatment and prevention of diseases. Like penicillin G, it is a broad spectrum antibiotic and it is effective against most gram – negative and gram – positive bacteria compared to other antibiotics. The side effects are relatively low. Current indications for the drug include: respiratory infections and whooping cough. Erythromycin is also known to be active against penicillin resistant Staphylococcus, Chlamydia and mycoplasma. The base and the salt, by being unstable at acid pH, are absorbed in the upper part of the intestine 2. To assure higher blood concentrations, the drug should be administered in the form of coated tablets that dissolve in the duodenum 3.

Physiological factors such as the presence of food; and intestinal motility and transit time, may affect the absorption of the drug with a consequent variation in bioavailability. 4,5 Highest serum concentrations of the base or stearate is 0.3 – 0.5 µg/ml, four hours after administration. It rapidly reaches bacteriocidal concentrations in all tissues and body fluids except in the brain. It is usually eliminated in the active form from urine, and bile, but part of the drug is also metabolized by demethylation2.

OBJECTIVES OF THE STUDY

From each product sample, 20 tablets were randomly selected and the weight of each tablet was determined. The mean weight and standard deviation were calculated.

Ten previously weighed tablets from each product sample were subjected to cascading and free fall shocks in the drum of a fraibilator set to rotate at 25 rpm for 4 minutes. The tablets were deducted of any adherent particles and reweighed. The difference in tablet weight was determined and the friability calculated as follows:

The crushing strengths of the tablets were determined individually with the aid of the static loading equipment. This was done by placing standard weights (kg) on top of the tablet until it yielded. The total weight was calculated as the maximum load (kg) that caused the tablets to break. This was then converted to Newton. With the vernier caliper, the width (thickness) and diameter of the tablets were measured in millimeter. Triplicate determinations were done for each product sample and the mean recorded.

A standard calibration curve was prepared as follows: 250mg (potency) erythromycin stearate was weighed and dissolved in 50ml methanol and sodium phosphate buffer solution, pH 8.0 was added to make exactly 100ml, giving a concentration of 2.5mg/ml. This was diluted serially with the sodium phosphate buffer solution to obtain the following concentrations; 1,2,3,4,5 and 6µg/ml.

The absorbance of the standard solutions were measured at 365nm using the UV spectrophotometer. The test was carried out in triplicate and plots of absorbance versus concentration were obtained as shown in the Figure 3.1.

A stirred beaker method (Okor et al, 2002) was used. A caplet containing 500mg of erythromycin stearate was placed in a stationary cylindrical basket (aperture size 425µm, diameter 2cm and height 3cm) suspended in 800ml of sodium phosphate buffer pH 8.0 as dissolution medium. The medium was maintained at a temperature 37 ± 0.5oC and stirred at 100rpm with a single blade – Gallenkamp stirrer. This was done with care to exclude air bubbles from the surface of the tablets. At various intervals, a 5ml specimen was withdrawn from a fixed zone, mid-way between the surface of the dissolution medium and the top of the cylindrical basket, not less than 1cm from the vessel wall. Every aliquot withdrawn for analysis was replaced with an equal volume of fresh dissolution medium at the same temperature. The aliquot was diluted 1 in 100 and then filtered through a Whatman No. 1 filter paper. The absorbance of the filtrate was determined at 365nm.

Sample brands of Erythromycin Stearate tablets: The list of different brands of erythromycin stearate 500mg tablets used in this study is shown in Table 3.1. Two brands, Erythrocin-500 (Abbott Laboratories, Pakistan) and Erotab-500 (Hovid) had no NAFDAC Registration Number. These products were probably smuggled into the Nigerian drug market without proper clearance by the authorities concerned, or the registration process was not yet concluded before the drugs were made available in the market for public consumption.

All the drug samples had expiry dates with two samples; Icethrocin (India) and Zin Zine (India) having expiry dates of 12/2011. It is also observed that all the 12 samples were imported into Nigeria from abroad, with 8 samples from India. The standard curve obtained is a straight line with the regression coefficient equation of y = 0.014 x + 0.000. (Figure 3.1)

According to the USP 1980; 20 tablets are to be used in the determination, and there is compliance if each of the individual weights is within the limit of 90% and 110% of the average weight. Table 3.3 shows the mean weight of the various samples of Erythromycin stearate tablets

The result of friability test of the various samples of erythromycin stearate (film coated) tablets is as shown in Table 3.4. The friability of a tablet is a measure of interparticualte cohesiveness of the particles and is a function of tablet hardness. A maximum mean weight loss of not more than 1.0% is considered acceptable for most products. From the table, products 1,2 and 7 failed the friability test, with friability values greater than 1.0%. It is expected therefore, that these product samples would break, chip or wear out during handling and transportation experienced in the manufacturing plant, in the drug distribution system and in the field at the hands of the end users (patients/consumers). These effects would result in possible loss in active drugs administered.

Table 3.4 : Some of the physicochemical properties of the erythromycin stearate tablets.

The tensile strength of the product samples are shown in Table 3.4. The results from the two methods used are compared, i.e. the static loading and the Monsanto Hardness Tester methods. Using Student’s t-test, the results showed that the differences were not statistically significant at 95% confidence level. In a previous work on comparison of testers by Brook and Marshall (11), it was affirmed that variations in crushing strength values between instruments are due in part to inaccuracies in instrument scale values, zero errors and varying methods of applying the load. Calibration is therefore necessary for accurate measurement using one instrument or when comparing results from more than one tester.

This is the measure of the mechanical integrity of tablets, which is the force required to cause them to fracture (i.e. break) in a specific plane. The hardness did not have significant influence on the disintegration times of the product samples.

The disintegration time of 4 products namely, samples 2,7,9 and 12 were below 5 minutes. There is the probability that some types of super disintegrants were employed in these formulations. 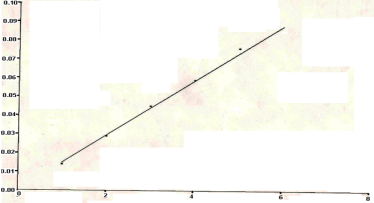 Erythrocin-500mg (Abott) used as reference standard at 90mins had amount dissolved of 80%. Another product ‘Labcin’ also released 80% of drug after 90mins.

Product samples Rycin® and Erythromycin-500mg were officially cleared into the Nigeria drug market with NAFDAC Reg. No 04-3205 and 04-7570.

Table 3.5: Dissolution Rates of Erythromycin Stearate tablets from the Various Samples, at 45mins and 90mins respectively

Figures 3.2, 3.3, 3.4 and 3.5 show the dissolution profiles of the various product samples of Eryhtromycin Stearate tablets. 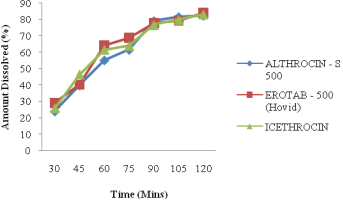 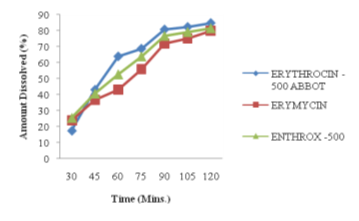 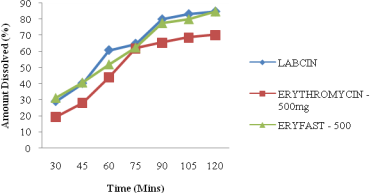 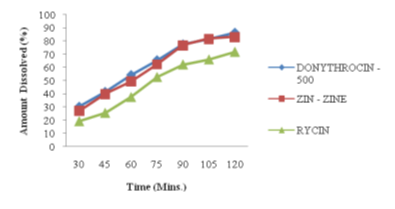 The therapeutic response to a drug in its dosage form can be predicted by studying the physicochemical and biological properties of the drug product. A thorough knowledge of the impact of the various manufacturing methods and technologies on the performance of the drug product would always be useful.

In this study, 12 different products of erythromycin stearate 500mg film-coated tablets were examined. The physicochemical properties studied included weight uniformity, friability, tensile strength, disintegration time, and dissolution rate. Product samples 1, 2 and 7 (Erythromycin-500, Erymycin® and Donythrocin-500 respectively) had friability values above the standard set by USP of not more than 1%. Their friability values were 1.55%, 2.04% and 1.33% respectively. It was also observed that the weight variation within each drug product was within the acceptable limit. All drug products disintegrated within 30 minutes as required for film coated tablets by the pharmacopoeias and FDA regulatory guidances11.

Film-coated erythromycin base tablets are expected to be absorbed at the duodenum (pH 6 to 6.5). All drug products except No. 9 (Rycin®) and No. 11(Eryhtromycin 500mg) released 70% and above within 90 minutes.

There is therefore, the need for our regulatory bodies, NAFDAC, NDLEA, PCN and Police Force to be adequately alert and watchful to prevail against the nefarious activities of some Nigerian nationals who possibly connive with their foreign cohorts to sneak in substandard drug products into the country even when such drugs have been initially registered.