Question: What scientific question was this part of the practical designed to address?

What is the effect of heat stability on two isoforms of the enzyme lactate dehydrogenase (LDH1 and LDH5) after pre-incubation (heat inactivation) of the enzyme samples at different temperatures?

Approach: Outline and explain the experimental approach that was used to address the question.

In order to determine the effect of the heat inactivation on LDH1 and LDH5, a colorimetric assay was carried out using different reaction mixtures prepared with LDH1 and LDH5. 16 test tubes were prepared each with a specific volume of LDH1 or LDH5. The same concentration of substrate solution containing lactate and NAD+ was added into each of the 16 tubes except for two tubes with the blank solution. Each of the enzyme samples were pre-incubated at 37°Ð¡, 44°Ð¡, 50°Ð¡, 54°Ð¡, 58°Ð¡, 62°Ð¡ and 66°Ð¡. The reaction mixtures had to be mixed, incubated for 37°Ð¡ and allowed to cool. This gives the lactate dehydrogenase enough time to work on the substrates under an optimum temperature.

The lactate dehydrogenase catalyzes a reversible reaction by converting lactate and NAD+ to pyruvate, NADH and H+ or from pyruvate to lactate. The overall effect of the enzyme is that it transfers a hydride ion from lactate to NAD+ or from NADH to pyruvate. (Zhadin N et al 2008). The NADH produced in the LDH catalysed reaction has absorption properties (wavelength) that are greater than that of NAD+ which makes it useful for this experiment.

When the colour reagent is added to the reaction solutions, NADH was used to form formazon (blue) according to the principle: Lactate + NAD+ → Pyruvate + NADH + H+

Methosulphate.The extent to which the enzymes have been heat inactivated will be reflected on the intensity of the formazon produced. The formazon was measured at 520nm in the spectrophotometer against the blank solutions for LDH1 and LDH5. The results obtained allowed us to compare how effective the LDH1 and LDH5 is at different pre-incubation temperatures and helps us to study the heat stability of the isoenzymes. 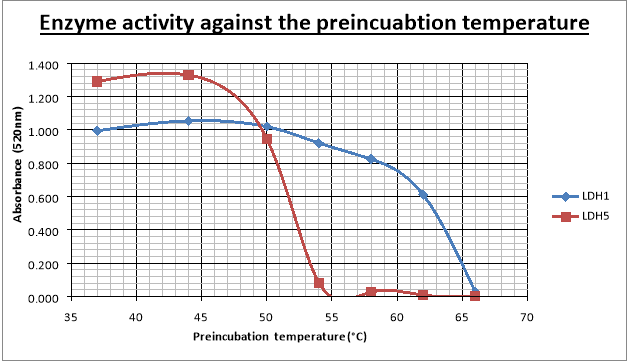 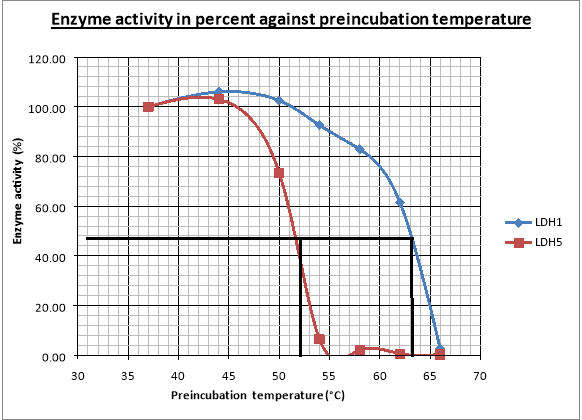 In figure 1 the absorbance begins to decline after around 44 °C in both enzyme isoforms. It is evident LDH5 has a higher absorbance than LDH1 at relatively low temperatures, but at 49°C there is an overlap between the isoenzymes and after this point LDH5 continues to have a lower absorbance reading than LDH1.

The LDH5 begins with an increasing enzyme activity from 37°C to 44°C and after 44°C there is a greater drop in enzyme activity of around 80%. The sharp drop in enzyme activity occurs much quicker in LDH5 than in LDH1 (figure 2), because there is a rapid loss of effectiveness when the temperature is raised above 50°C. LDH5 also loses function at a lower temperature compared to LDH1; it becomes inefficient at 58°C, where the curve remains consistent with a very low enzyme activity (0.31-0.62%). In addition, the LDH1 isoform demonstrates half maximal activity at 11.4°C greater than that of LDH5 illustrating LDH1 is more tolerant to increasing temperatures. The results have shown that LDH5 has low heat stability and becomes inefficient at a lower temperature than LDH1.

The lactate dehydrogenase is characterised by its isoenzymes that are tetramers. The tetramers are made up of four monomers; H4 (heart) or M4 (muscle). The monomers are formed by a polypeptide chain of amino acids which consists of an active site. When there is lactate and NAD+ present in the solution, the peptide loop in lactate dehydrogenase blocks the access to the binding site after the substrates have bound; this aids the transition state of the reaction.

The difference in heat stability between the two isoenzymes in the experiment can be due to the amino acid sequence of M and H subunits. The amino acid composition of M and H subunits consist of the same amino acids, however the difference is that they have varying numbers of each amino acid. LDH1 has a greater composition of valine, aspartic acid and methionine residues in comparison to LDH5 (Goldberg E.1972).The higher the methionine content in LDH1 means there is more sulphur atoms capable of forming strong covalent disulphide bridges, which can be why LDH1 is more heat stable as more energy is required to denature the isozyme compared to LDH5.

Heat inactivation of the isoenzymes can affect the protein structure of lactate dehydrogenase. To form the primary structure, the -COOH group of one amino acid combines with the -NH of another to form a peptide bond. Within proteins there are regions that are arranged into alpha helices and beta pleated sheets. The bonds that hold these together are hydrogen bonds between lone pairs of oxygen and a hydrogen atom. The alpha helix is when the polypeptide is in a spiral form allowing more hydrogen bonds to form between the residues. Similarly, the beta pleated sheet consists of polypeptide chains running parallel or anti-parallel to each other. The way the polypeptide chain is arranged allows more hydrogen bonds to be formed. The two secondary structures fold up differently to form a 3D shape. There are various bonds that holds this shape together: ionic interactions between -COOH and -NH2 groups of different amino acids, hydrogen bonds between the side chains, van der Waals forces where fluctuating dipole in one of the groups of the amino acid can create a dipole in another which is used to keep the folded structure together, hydrophobic and disulphide bridges. A quaternary structure is formed by interaction of several polypeptide chains/subunits (LDH1 consists of 4 H subunits).

In conclusion, the heat inactivation can interfere with the different interactions between the amino acids that make up the protein structures. The heat inactivation has shown to provide enough energy to overcome some of the covalent bonds to denature the enzymes. Since LDH1 is found to have a negative charge it may be associated with many ionic interactions which needs more heat energy is needed to overcome the strong bonds, hence why it takes a greater temperature (66°Ð¡) for LDH1 to lose enzyme activity. The strong bonds holding the LDH1 together means the enzyme is not destroyed at 60°Ð¡ however LDH5 is destroyed which is evident by its inability to function adequately after 55°Ð¡.

Question: What scientific question was this part of the practical designed to address?

How to study the kinetic parameter of different LDH isoenzymes by finding the Vmax and Km values for LDH1 and LDH5.

Approach: Outline and explain the experimental approach that was used to address the question.

To study the kinetic parameters of different LDH isoenzymes, the experimental procedure and principles where exactly the same when the reaction mixtures were prepared before. However, the LDH isoenzymes were added to different concentrations of substrate solutions and the temperature was constant. A coloured complex is formed using the mechanism in the previous experiment which produces blue formazon. The absorbance of the formazon was measured using the spectrophotometer; the absorbance measured indicates the enzyme activity. The results from this experiment will help to understand the effect of varying substrate concentration has on the enzyme activity and compare this between the two isoenzymes. To determine the Vmax and Km values more accurately the Lineweaver-Burk-plot is used.

Table of results for LDH1 and LDH5 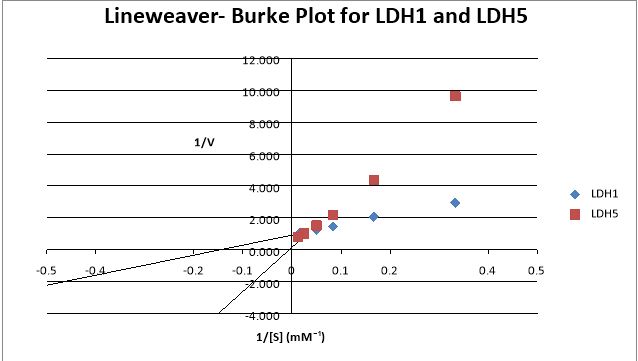 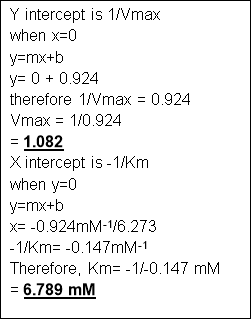 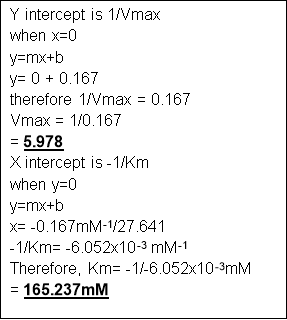 Table of results for Vmax and Km in both isoenzymes.

In this experiment we observed the catalysis of lactate dehydrogenase from lactate to pyruvate. The pyruvate produced has the ability to enter the mitochondria, where pyruvate dehydrogenase links the glycolysis metabolic reaction to the citric acid cycle. In a process of pyruvate decarboxylation, the pyruvate is converted into acetyl-CoA, which releases energy by converting NAD+ to NADH and H+. Pyruvate has the potential to either enter the mitochondria to become acetyl-CoA or become lactate. The Cori cycle is involved in the conversion of lactate to pyruvate. When lactate is produced in the muscle, it is released into the bloodstream and transported to the liver. In the liver the lactate is first converted to pyruvate by lactate dehydrogenase and pyruvate is converted to glucose through gluconeogeneis.

Lactate dehydrogenase becomes activated when there is a high concentration of its substrates, NAD+ and lactate. For instance when the skeletal muscle containing LDH5 have high demands for energy this means the large production of NADH and pyruvate from high substrate levels will not be metabolised by pyruvate dehydrogenase. The LDH5 (M form) is more specialised to convert pyruvate to lactate and ideal for anaerobic activities. Whereas the LDH1 form is more favourable for the conversion of lactate to pyruvate, LDH1 is predominantly found in the heart where there is an aerobic environment. This means despite increasing the substrate concentration, the LDH5 may not become as efficient in converting lactate to pyruvate as LDH1. The results reflect this as LDH1 has a generally greater enzyme activity with an increasing substrate solution compared to LDH5 (see table of results).

In conclusion, the results obtained from the analysis of data on excel may not be highly accurate since most of the values have been rounded and it does not take into account any possible practical or human errors. Based on the charge of the two isoenzymes, a gel electrophoresis could have been done to calculate Vmax and Km.