Healthcare has become the primary concerns of public. There are many factors to ensure people health’s quality. Among them, food-stuff has a directly impaction on people health. At the time when food-stuff industry develops swiftly, it is really hard to distinguish between good and bad products. Especially, chemicals have been misused to add on processing products – not only on food, but also on drinks. Soda is the most popular drinks in the world. It appears in over 200 countries. However, not many users know how much sugar and carbonate they consume after drinking a can of those, which has strong affection on their health. This paper will discuss the issue of soda’s influences on people health in the United State and propose some solutions to these problems.

Soda – another name of soft drinks or carbonated drinks – is a bizarre mixture of a great deal of sugar (or high fructose corn syrup), corrosive phosphoric acid, caramel coloring and a well-known drug – caffeine (Dillan, 2013). Beverages are usually packed by can, glass or plastic bottle, supper-sized bottle for some kinds. They can be seen in any supermarkets, restaurants or simple junk food stall. Moreover, they are colorful, eyes catching and cheap. It is partly explained the reason they are familiar to the major group of American, especially teenagers and young adults.

In recent years, people drink more and more soda. One of the biggest consumers is the United State with the sales volume increased up to 170 liters per one year in 2012 (Check, Dodson and Kirk, 2012). There is a big number of people who get addict to soda. According to Coca-Cola, there were 1.7 billion soda servings sold every day in 2010 (Coca-Cola GB, n.d.). Count out of only America, about 48 percent reported drinking at least one glass of soda per day. Among them, 20 percent drank more than 2 glasses (Saad, 2012). Carbonated drink has many reasons to become so popular and addictive. They were sold and advertised everywhere, the price is moderate. Especially, it contains plenty of sugar (or high fructose corn syrup) and caffeine, which provide instant energy and vigilant. However, long term drinking too much sugary drinks can lead to a lot of diseases. New Harvard School of Public Health (HSPH) research suggests that roughly 180,000 obesity-related deaths worldwide—including 25,000 Americans—were associated with the consumption of sugary drinks (Hsph.harvard.edu, n.d.).

The issue of high soda consumption has led to several problems. Firstly, soda contains big amount of sugar. In 12-ounce can of coke, there are about 39 grams of sugar, which is about 9 1/3 teaspoons (Coffman, 2013). This amount of sugar would transform to about 154 calories in human body. According to American Heart Association (AHA), limit for daily added sugars intake is 100 calories (about 6 teaspoons) for women and 150 calories (about 9 teaspoons) for men (Heart.org, 2014). It can be seen that only a 12-ounce can of coke transcend the maximum sugar permission level for a day. The caloric excess can cause many diseases such as obesity, type 2 diabetes, high blood pressure. Author of The Small Change Diet: 10 Steps to a Thinner, Healthier You, Keri Gans, said that “One 12-ounce soda a day translates into 16 pounds of extra weight over one year! If you drink one 20-ounce bottle of soda (which contains about 250 calories), you will drink up about 91,000 calories, which translates into 26 pounds of extra weight!”. 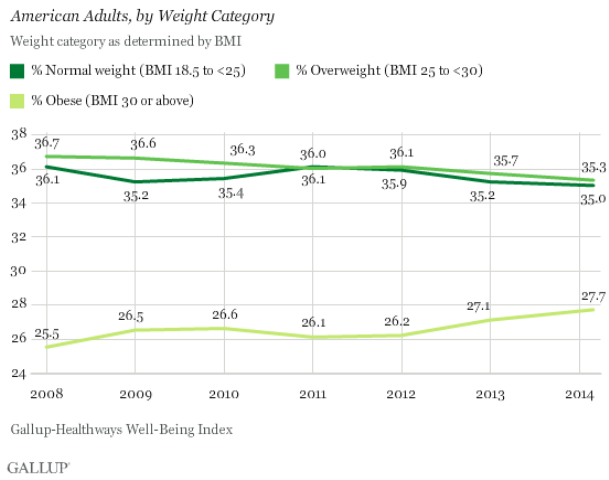 The proportion of overweight adults and obese adults in 2014 is 35.3 percent and 27.7 percent respectively. This obesity rate was the highest annual rate Gallup and Healthways have measured since beginning to track obesity in 2008 (McCarthy, 2014). Absorption of lots of sugar caused blood glucose levels to rise higher than normal. This is also called type 2 diabetes. The redundance of glucose in bloodstream can lead to heart and blood vessels diseases, nephropathy, eyes damage (Mayoclinic.org, 2014).

Secondly, carbonated beverages brought about several problems of bones and teeth by its phosphoric acid. Tufts University researcher, Katherine Tucker, found that women who drank more than three 12-ounce servings of cola per day had 2.3 to 5.1 percent lower bone mineral density in the hip compared with women who consumed less than one serving per day (Enews.tufts.edu, 2003). Moreover, acid and acidic sugar byproducts in soft drink soften tooth enamel, contributing to tooth decay (Colgate.com, n.d.). Children and teenagers usually do not consume enough calcium in their diet while they drink soda more often. Long term beverages intake can reduce the amount of calcium in their bones and teeth. If this happens day after day, users will be at high risk of osteoporosis. This kind of illness considerably impact on human’s health and daily activities.

In addition, beverages usually accommodate a great quantity of caffeine – about 45 to 60 milligrams. Caffeine is a kind of drug because it changes how you brain works. It is also considered to be stimulant. This chemical crosses the blood-brain barrier and gets inside the brain and central nervous system (Scott, 2014). Consumers may feel excited and alert when they use, however, stimulant can brings many bad effects to their body, even their brain. Caffeine not only brings users energy, it also triggers and releases stress hormones. It means the benefit only occur temporarily, after that, the body will feel exhausted and distracted. Drinking too much soda a day is the same with absorbing plenty of caffeine, which can easily cause insomnia, fatigue and stress. In fact, there are some phenomena occur to the abuser of caffeine. Although they are awake, they can not concentrate to what they are doing or feel light-headed – no physical strength. Undoubtedly, soft drink is not effective as expectation, it just cheat on human’s feeling.

Besides, a study of University of California San Francisco (UCSF) has shown thatdrinking sugary drinks was associated with cell aging. “Regular consumption of sugar-sweetened sodas might influence disease development, not only by straining the body’s metabolic control of sugars, but also through accelerated cellular aging of tissues.” saidElissa Epel, PhD, professor of psychiatry at UCSF and senior author of the study. The survey also indicated daily consumption 20-ounce of sugary drinks shortened life expectancy by 4.6 years (Leung et al., 2014).

These issues bring a lot of negative aspects, not only for individuals but also for the country and society. However, there are several possible solutions to resolve these problems. The first solution is to raise educational awareness of citizens. To be more specific, schools can give some lectures to both parents and students. The purpose is to show them the terrible consequences of long term taking soda and teach them how to build a healthy diet or how to give up carbonated drinks. For example, they should replace daily Coke by fresh water or less-sugar juice. It is better for their skin and healthier. Besides, organizations related to food-stuff and health should conduct researches and provide convincing evidences to the citizens. It would be better to publish those lectures and researches on media such as television, radio, internets. In other words, this solution is used to gradually change the drinking habits of beverage’s consumers.

Furthermore, some kinds of taxes can be increased or imposed heavily, for instance, non-alcohol carbonated drinks tax, plastic bottled beverages tax, advertise tax. There is a fact that beverages’ industry can be succeed like today, thanks to an important part to the advertising and marketing strategies. Coca Cola spent over 4 billion for marketing around the world and 3.3 billion on advertisements in 2013, represented 7 percent of its net sales (Forbes, 2014). In sum, marketing and advertisement play an important role in the level of consumer products. Therefore, restricting advertisements can reduce soda’s popularity and impaction. In January 2014, the Mexican government slapped an extra tax of 8 U.S cents per liter on sugary beverages. The result came out effectively, sale level for the biggest soft drink bottler, Coca Cola Femsa, dropped by 4.6 percent in Mexico during the first half of 2014, compared with the same period of 2013 (Guthrie, 2014).

Those solutions above have two sides – advantages and disadvantages. This paragraph will evaluate the proposed solutions and suggest the best one. For the first solution, the good points of it are to change human’s eating habits and bring long-term effects. On the other hand, habits are difficult to change. It is very hard to overcome the psychological obstacles of avoiding favorite beverages. Moreover, to conduct a research or hold a thematic and publish them is simple and cheap. The price of making banners, advertisement or experiments’ devices is pretty high. For these reasons, this solution is time consuming and expensive though it is very effective. In comparison, the second solution succeeds almost immediately. However, it also has disadvantages which are really complex and sensitive. Taxes are under the management of the government, thus imposing new tax may impact the politics and economy problems. Once the genuine items are interfered, the contraband goods will take advantage of spreading which can cause serious consequences for customers. Therefore, the best solution should be the long-term increasing educational awareness.

Carbonated beverages have become a part of Americans’ diet. They are usually served with fast food which contains a lot of oil and calories. Totally, their meal accommodates much higher level of calories they need for a day. This prolonged situation can lead to enormous problems. For the purpose of avoiding negative consequences, human should have initiative solutions to solve those problems, especially to raise the awareness of healthcare and nutrients in soda, which cause many influences on people’s health. Overall, soda cause plenty of problems for people’s health, however, human can actively avoid them.

Coca-Cola GB, (n.d.).How many cans of Coca‑Cola are sold worldwide in a day? : FAQ. [online] Available at: http://www.coca-cola.co.uk/faq/products/how-many-cans-of-coca-cola-are-sold-worldwide-in-a-day.html [Accessed 15 Dec. 2014].

Colgate.com, (n.d.).Soda and Teeth – Is Soda Bad for your teeth. [online] Available at: http://www.colgate.com/app/CP/US/EN/OC/Information/Articles/Oral-and-Dental-Health-Basics/Oral-Hygiene/Oral-Hygiene-Basics/article/Soda-or-Pop-Its-Teeth-Trouble-by-Any-Name.cvsp [Accessed 19 Dec. 2014].