The purpose of this literature research was to distinguish the differences between verification and inquiry based laboratory experiments in educational settings, and their effect on student education. Examples of the incorporation of inquiry into course curriculum were found. The effect of inquiry on knowledge type gained by students, and classification of their laboratory reflective statements was analyzed based on results contained in various literature sources. Literature based survey results depicting student attitudes toward verification versus inquiry, and guided inquiry versus open inquiry were obtained and discussed. Suggestions for instructors as regards to the incorporation of inquiry into laboratory settings, and guidelines to do so were obtained and presented in this literature paper. It was determined that, though both verification and inquiry experiments have benefits, inquiry allows development of student skills that may not be otherwise obtained through a verification experiment, and allows for a more student-driven laboratory setting.

Experimenting in the lab is a way for students to learn hands-on about the concepts they cover in lecture.1 The average laboratory experiment falls within the category of “cookbook style,” or “verification experiment.” These terms will be used interchangeably throughout this research paper. A verification experiment consists of students following a list of instructions, provided to them by the instructor, to verify a concept learned in lecture.2 The laboratory instructions for verification experiments often follow a similar format to instructions in cookbooks; hence the term “cookbook style.” Various educational institutes have replaced a number of verification labs to incorporate lab by inquiry into chemistry courses.213 Lab by inquiry can be separated into two major categories. These categories are guided-inquiry and open-inquiry.1 Alan Colburn defines guided and open inquiry in his article, “An Inquiry Primer.”4 Guided inquiry consists of the instructor providing students with only a problem and the materials to solve it. Students devising their own laboratory procedures to solve the problem is a requirement for guided inquiry.4 Open inquiry is similar to guided inquiry, with the exception that students must come up with their own problem to solve along with their own procedure.4 Open inquiry involves a higher level of difficulty than guided inquiry, because students are provided with less information and guidance to devise problems and develop procedures.

Undergraduate Research was done to create a heat-transfer guided inquiry based lab for Allied Health students at Rochester Community and Technical College, under the advising of Dr. Heather Sklenicka. The Allied Health student class did not have a heat-transfer lab, and no exposure to lab by inquiry. In this lab, students were given the opportunity to develop their own procedures to solve a given problem. The given problem applied to a real-life situation, which involved imagining they were opening their own coffee shops in a busy college town. Students had to determine the best container to sell their customers’ coffee in, i.e. the container that contained[ZJM3] heat most effectively. This required the students to test various coffee mugs, thermoses, and other containers for their efficiency in preventing the transfer of heat from the system to the surroundings. 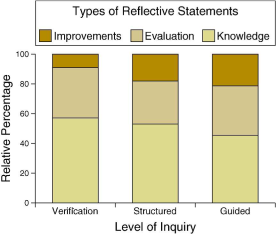 A group of researchers from the Departments of Chemistry and Biochemistry at the University of Arizona, Tucson, Arizona, studied the effects that different levels of inquiry had on General Chemistry students’ written lab reflections. Written lab reflections refer to post-lab responses regarding work done in lab, and analysis of data collected during experimentations. Figure 13 displays the results from this research of the various types of reflective statements shown by students and how they varied based on level of inquiry. The amount of evaluation statements varied little among the different types of labs. Evaluation statements consist of analysis of data obtained in lab.3 The largest portion of statements in written lab reflection fell under the category of knowledge statements. Knowledge statements consist of reflections regarding knowledge gained from lab experiments.3 Guided inquiry had the lowest amount of knowledge statements, likely due to a higher portion of improvement statements. The amount of improvement statements in students’ written lab reflections varied the most among the different levels of inquiry in lab. Improvement statements consist of possible modifications that could be made to methods or the experiment itself.3 This is reasonable because, unlike verification experiments, inquiry requires students to develop their own procedures. This allows for a more significant amount of lab technique and procedural error, resulting in a more significant amount of inaccuracy in experimental data. Students must then explain error in results and this often consists of reflecting upon experimental mistakes and how improvements can be made to allow for improved experimental results.

The University of Arizona researchers also focused on knowledge type gained from experiments based on students’ written reflections. Revised Bloom’s Taxonomy6 was used to categorize students’ reflective statements reguarding knowledge gained from laboratory work.3 Bloom’s Revised Taxonomy can be broken down into four knowledge type categories; metacognitive, procedural, conceptual, and factual.6 Metacognitive can be described as the knowledge regarding cognition. The awarness of one’s own cognition falls under this category as well. Examples of metacognitive knowledge would be strategic knowledge, knowledge regarding cognitive tasks, consisting of appropriate contextual and conditional knowledge, and knowledge of oneself and abilities. Procedural knowledge consists of knowing how to go about a task. Examples of procedureal knowledge would be agorithms, techniques, and determination of when to use proper procedures.6 Factual knowledge is the basic information students’ must know to be familiar with a discipline and solve problems related to it. Examples of this would be knowledge of terminology, specific details, and basic information regarding a topic.6 Conceptual knowledge consists of the ability to see the connection between basic concepts and a larger picture or problem, allowing them to work together. Examples of this type of knowledge would be knowing certain classifications, principles, categories, and generalizations, as well as theories, structures, and models.6 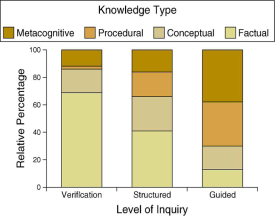 Figure 23 depicts the level of the various types of knowledge gained in the laboratory based on students’ written reflections and the level in inquiry involved in the experiment. As one can see, students’ reflections in inquiry labs display a larger portion of metacognitive and procedural knowledge than the verification, while the verification lab reflections showed more factual and conceptual knowledge. In guided inquiry, students are pushed to focus more on the procedure and how one would go about solving a given problem. This requires a higher level of thinking and problem solving skills than that involved in a verification lab. 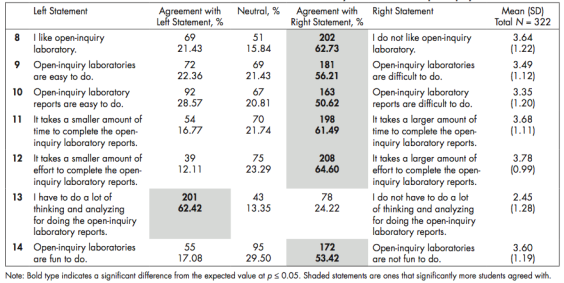 Table 21 depicts the results from the survey regarding open-inquiry laboratory experiments. The left and right statements were the same as those shown in the guided-inquiry survey (see Table 1). Students generally had a less positive attitude toward open-inquiry experiments when compared to guided inquiry.

Table 3: Students’ Survey Statement Regarding Both Open and Guided Inquiry1 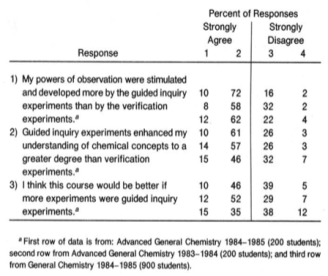 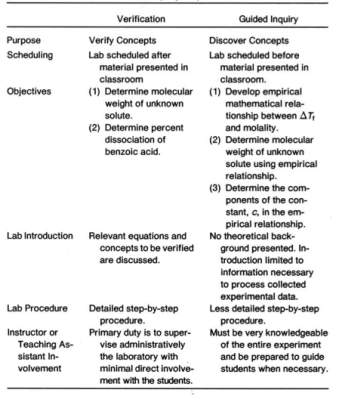 Though there are no concrete rules to converting verification labs to inquiry experiments, the USMA research group put forth general guidelines to assist instructors in creating their own inquiry experiments or converting old verification style to inquiry format.2 Step 1 would be to select an experiment from the course curriculum. The experiment should include fairly simple and easy-to-understand concepts. Data should be collected using an uncomplicated apparatus, and allow for a quantitative and mathematical relationship between variables. Conclusions from the analysis of experimental data should be able to be tested.2 Step 2 would be to alter the introductory (pre-lab) material so that major concepts would not be taught before lab time.2 Students should learn concepts based on experiments in lab and interpretation of data collected. Step 3 would consist of significantly reducing the amount of detail put into procedural steps in the lab handout. This would require more thought on the part of the students regarding how to collect relevant data and how to interpret it.2 Step 4 includes adding a step or procedure to the end of the lab, allowing students to authenticate their analysis of data and conclusions regarding important concepts.2 The last step would be to include short questions to guide student thoughts and include in the laboratory report.2 An example of a conversion of a verification experiment to guided inquiry can be found in Table 5.2 The USMA converted a freezing point depression verification experiment to a guided inquiry lab.2 There are clear differences shown between the verification and inquiry versions of the lab regarding purpose, schedule of lab time, objectives, laboratory introduction, procedure, and instructior and teaching assistant duties[ZJM5].

Both verification and inquiry experiments have benefits. However, inquiry can provide a more challenging laboratory experience for students and lead to development of skills that may not have been otherwise acquainted[ZJM6] with in cookbook or “verification” experiments. Based on various literature sources132 and undergraduate research done at Rochester Community and Technical College (see Appendix[ZJM7]), lab by inquiry is an effective way to teach students critical thinking and problem solving skills, while allowing students to discover concepts within a laboratory setting before learning them in lecture. Students generally have a positive attitude toward inquiry.12 Inquiry also allows for a break from the typical verification experiment, and a more student-driven laboratory setting. Instructors can incorporate inquiry into curriculum by the conversion of previously developed verification experiments into inquiry labs.2

[ZJM1]When you elude to the fact that inquiry-based labs allow for better development of student skills, you might want to mention the measure(s) used to determine this. That way people know the assessment and can choose to read on from there.

[ZJM2]I’d move the appendix to the end. It is really something appended to the article that doesn’t really belong in the flow of the article.

[ZJM4]Something you might consider is to add a few subheadings in the body of your discussion. You are really tackling two areas of inquiry labs: 1. The effectiveness of the labs and 2. Student attitudes toward inquiry. It might be nice to offset them with headings instead of just a paragraph indent to focus the reader’s attention even further.

[ZJM5]Is there data on the effectiveness of these labs to corroborate your statements from the Arizona research group?

[ZJM7]Do you have results in the form of tables/graphs for the research you did? It might help out here bridging your paper together…and in that case, you don’t necessarily need to call it an appendix either.