Electroplating is the process of plating one metal onto another by hydrolysis, most commonly for decorative purposes or to prevent corrosion of a metal. There are also specific types of electroplating such as copper plating, silver plating, and chromium plating. Electroplating allows manufacturers to use inexpensive metals such as steel or zinc for the majority of the product and then apply different metals on the outside to account for appearance, protection, and other properties desired for the product. The surface can be a metal or even plastic.[1]

How does varying the voltage of the circuit affect the rate of electroplating a metal with copper?

The voltage of the cell also known as the E.M.F (electromotive force) is known to be the force that drives the current thhrough the circuit. It is expected that by increasing the Voltage the circuit will lead to an increase in the rate of electroplating the metal as more current will flow easily throughout the circuit.

The amount of time allowed for reaction to occur will be measured with the use of a stopwatch. The voltage of the circuit will be increased by a fix aed amount of 1.5V to keep the experiment and easily measure a changein rate. The same metal rod will be used throughout the experiment for all trials and of the different voltage. The mass of the metal rod to be used is 7g

I Setup the circuit as shown in the diagram below.

I measured the initial mass of the metal and recorded it.Starting with one cell of 1.5V.

I closed the circuit and allowed the reaction to occur for 10 minutes. I removed the electroplated metal and measured its mass and recorded it in the table.

I Repeated the experiment increasing the number of cell each time and recorded the mass of the of the electroplated metal each time.

There is the risk of electrocution if care is not taken. To avoid this the use of well protected wires is necessary and great care must be taken when carrying out the experiment.

The data has been processed. The mean of the three trials for each voltage has been calculated and represented on the table above as Mean Average mass of metal. Also the mass of copper that was electroplated onto the metal rod was calculated using the equation: 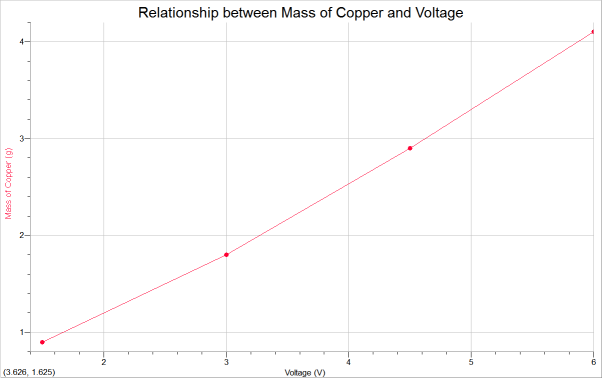 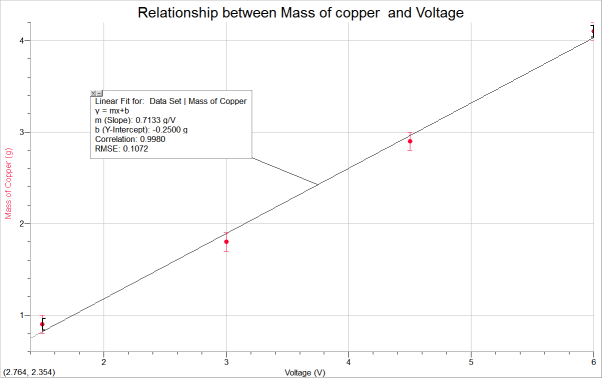 As expected when there was an increase in the voltage flowing in the circuit the mass of copper that was electroplated onto the metal rod increased too. This is because as the voltage increases a larger number of electrons flow from the cell or battery into the anode which causes the formation of copper ions to occur faster and so more ions are attracted to the metal rod (cathode) in the given time.

The relationship between mass of copper electroplated and voltage can be seen on both graph 1 and graph 2 above. In graph 1 there is an increase in mass as voltage increases but the graph obtained is a slight curve rather than a straight line which indicates random errors, this could likely be due to the voltage fluctuating in circuit.

Graph 2 shows a line of best fit for the graph and it is a straight line graph as expected, the error bars are plotted as well. The line passes through all the error bar ranges but does not touch any of the points on the graph and it does not pass through the origin (0,0), this may be due to systematic errors such as errors in the electric balance when measuring the mass of the metal rod before and after electroplating. The linear correlation is 0.998, which suggest very strong correlation between the two variables.

The graph of values obtained was not exactly the same as what was expeted. A straight line graph starting from the origin was the expected graph but the graph ontained after a lin of bestt fit was plotted started from the y-intercept -0.25. This was due to errors in the experiment. Random errors such as the fluctuation of the voltage flowing through the circuit as a result of the chemicl reactions going on in the cell led to some of these errors. The voltmeter showed values that ranged from below to above the value of the voltage required indicating that this variable was not kept constant. The deviations were very little and not too far from the required voltage but were still enough to cause errors. It is also possible that because the same solution was used for all trials not all the copper ions had been electroplated onto the metal rod, this could have altered the concentration of the electrolyte (copper sulphate) leading to more errors as the concentration of the electrolyte also has an effect on the rate of electroplating.

Systematic errors were also present throughout the experiment, errors in measuring the mass of the of the metal rod before and after electroplating and also in measuring the mass of the anhydrous copper sulfate solution. This may have been due to poor caliberation before the experiment was carried out. The copper used may also have not been pure as it is possible that there were impurities in the copper solid used. Finally not all of the copper was rinsed off the metal rod before it was used for the next trial which could have altered the total mass when the mass of the metal after electro plating was measured. Errors in measuring the volume of water to be added to the beaker could also have been present. Systematic errors in the stopwatch used such as the delay in starting when the timer was started. The experiment also depended on human reaction time which is known to less accurate than machines, this will have led to more errors.

It is impossible to keep the voltage of the cells constant but the range of values can be reduced by using new cells. The eleectric balance cshould be well caliberated before carring out the experiment and a balance with a higher degree of accuracy and sensitivity (measures to more decimal places) could be used. Before each trial a new electrolyte solution could be used to avoid any changes in concentration during the experiment. The experiment could have been automated using a switch that opened after ten minutes from when it was closed to eliminate the error as a result of dependence on human response time. The experiment could also have been repeated more times to reduce errors and increase accuracy. Also a lager rane of voltages could have been tested to gain more data for better more accurate analysis.