Topic: The denaturing of enzymes.

Purpose: To further investigate catalysts and enzymes as well as their reactions to temperature change.

Problem: How does temperature affect the rate of an enzyme-catalyzed reaction?

Information found: Like the majority of chemical reactions, the rate of an enzyme-catalyzed reaction raises as the temperature elevates. According to the source, “A ten degree Centigrade rise in temperature will increase the activity of most enzymes by 50 to 100%.”Many enzymes are unfavorably affected by intense heat. Because most animal enzymes quickly become denatured over 40°C, nearly all enzyme activity is accomplished under that temperature. After some time, enzymes neutralize– at even reasonable temperatures. The recommended temperature to store enzymes is 5°C or lower but even some enzymes deactivate when frozen.

Information found: Collisions between molecules increase as temperature increases. This is because of the increase in velocity and kinetic energy that is a result of increased temperature. With rapider velocities, there will be less time between molecule collisions. This results in supplementary molecules reaching activation energy, which elevates the rate of the reactions. Since the molecules are also moving quicker, collisions between enzymes and substrates also increase.

Dependent Variable: The rate at which the liver rises to the surface of the hydrogen peroxide.

Hypothesis: If enzymes are heated to 70°C then the rate of enzyme-catalyzed reactions will decrease because the denaturing of enzymes occurs after 40°C.

Step 1: Put on an apron, gloves, and safety goggles. Also, make sure hair is tied up away from your face and out of the way of any experimental material.

Step 2: Use forceps to place raw liver in an open Petri dish. Use a pipette to put a few drops of hydrogen peroxide solution on the liver. Observe any chemical or physical changes. (Caution: Rinse off any hydrogen peroxide that comes in contact with skin, eyes, or clothing)

Step 3: Cut of a 5 cm x 5 cm piece of filter paper and absorb it with a sample of liver.

Step 5: Use forceps to drop the livered filter paper to the bottom of the solution. Record using a timer how long the filter paper takes to rise to the surface. Seek assistance if needed.

Step 6: Now, heat 25 mL of water and a sample of liver in a 50 mL beaker to 70°C with on a hot plate. (Caution: Hot plates are called hot plates for a reason; their hot. They can burn you. Seek adult assistance if young or incapable.)

Step 8: Repeat the previous experiment with the heated liver. Records results then analyze the data.

Step 9: Compare and contrast the data sets from each part of the experiment. 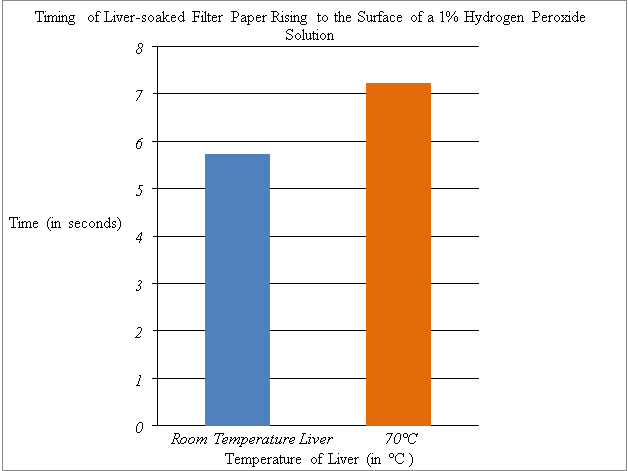 When analyzing the results of the experiment, it is easy to see that there are trends in the data. The relationship between enzyme activity and temperature is inversely proportional. The higher the temperature of the enzymes, the faster they react and the less time the livered filter paper takes to rise to the surface of a 1% hydrogen peroxide solution. However, after 40°C, the denaturing of enzymes; therefore slowing down enzyme-catalyzed reactions. This is because as the denaturing of enzymes occurs they no longer fit their specific ‘lock’ to which they are ‘key’ to.

Though there was not any lack in accuracy, there was an extreme lack of precision during this experiment. Firstly, the assistant scientific hands were not at all interested in the experiment; making it exceedingly difficult to attempt to get them on task, complete the experiment, and get steps that require the cooperation of more than one individual done. It is also importance to recognize the limitation of time allotted for previously mentioned tasks to be applied; one class period. Also, it would have made all the difference in the world if the time it took for the filter paper to rise in increments of 5 mL could have been measured since it rose through 25 mL of 1% hydrogen peroxide solution. In doing this, it would be seen whether the filter paper accelerated positively or decelerated as it rose through the solution. But due to time constraints, lack of expertise, and lack of an extremely precise timing device, such an idea could not be executed. But even before trying to accomplish that out of the ballpark idea, it would have been better to allow more trials for each temperature of liver and perhaps entertain the addition of higher or lower temperatures of liver. Perhaps refrigerated liver? Even better, liver at or around 40°C.

Knowing how enzymes react to heat is vital for a number of biologists globally. Especially since biologists are required to properly handle and store enzymes. Enzymes are best stored below 5°C in order for them to not o dormant. Also, it is important for real life biologists to understand that enzymes will work faster in heat only up to a certain point. For example, in many animals, enzymes denature after they hit 40°C. Almost all enzyme activity happens below that temperature.

In correlation to the hypothesis, the outcome of the experiment proved the following hypothesis: “If enzymes are heated to 70°C then the rate of enzyme-catalyzed reactions will decrease because the denaturing of enzymes occurs after 40°C.” The hypothesis gathered from the evidence pertaining to the collision theory ended up being true not only on paper but in real life experimentation and scenarios as well. Since the chemical reaction slowed when the livered filter paper was heated to 70°C, then it is easy to say with utmost certainty that the relationship between temperature and reaction time is indirectly proportional up until 40°C.

In regards to the purpose of the lab experiment, many investigations have been made that further our knowledge on how to properly handle enzymes temperature wise. Which temperature are too hot, which are not hot enough, etc. Also, from the information gathered, other intelligent assumptions can be made on the proper storage of enzymes. Since it is known that enzymes, over time, become dormant—wouldn’t it be ideal to freeze them so they retain their activity? But perhaps, that is for yet another experiment.

The collision theory states that as temperature rises, particles move more rigorously as collide more often. When these molecules bump into one another, reactions occur—in this example, the enzyme-catalyzed reaction is the result. The amount of collisions it takes for a full reaction to occur is the activation energy of a chemical reaction. This theory is the first piece of evidence for the increase in enzyme-catalyst activity then temperature increases.

The Induced Fit theory of enzymes accounts for the fact that the activity and substrate of an enzyme are complementary and mold to one another’s ice-cube tray, or as biologymad.com likes to say, “Mould to each other like ‘hand in glove.’” The links in substrates and enzymes bend when enzyme-substrate compounds form, deteriorating them significantly. Unlike the ‘Lock and Key’ theory of enzymes, the Induced Fit theory accounts for catalytic action and the products of chemical reactions pertaining to enzymes.