Does increasing the concentration of KNO3 and NaCl in intervals of 1g effect the temperature at which they crystallise and hence their solubility?

Solubility is a chemical property referring to the ability of a substance whether it be solid, liquid or gas to dissolve in solvent depends on the attraction between the substance and the intermolecular bonding. It also can be attractive forces within from the substances that holding one partial to another. If it dissolved easily, the substance is soluble. If it does not dissolve, the substance is insoluble (Kuiper’s K,2019 p.386). once the maximum amount of solute has been reaches and no more can dissolve, therefore the solution has become saturated.

Potassium nitrate (KNO3) is a chemical compound with the formula KNO3. It’s classified as a solid and crystalline ionic compound that formed by one potassium(metal) cation (K+) with one nitrate(non-metal) anion (NO3-) (Chemical book, 2019). Because salts contain of ions, they contain whole positive and negative charges which are electrostatically attracted to each other. This is known as a stronger type of bonding (even stronger than dipole-dipole interactions). When the solute is dissolved in water to form a solution, the whole charges of ionic substance will interact with a polar substance (H2O), which has partial positive and negative charges. Ionic substances crystallise from aqueous solution with the molecules of water still attach to the ions. The solubility of most ionic solids in water depends on the increases of temperatures. As an unsaturated solution cools, it will reach a temperature at which crystallisation starts to occur. For some solutions, for example, potassium nitrate. This indicates that the solution has become supersaturated. At this temperature, the solutions contain the maximum quantity of solute that can be dissolved in that amount of solvent. If the temperature at the point of saturation is recorded for several different quantities of solute, the data can be plotted on a graph in order to construct a solubility curve versus temperature curve.

Sodium chloride is a widely use chemicals and well-knowns as table salts and is an inorganic compound with the formula NaCl, representing a 1:1 ratio of ions. It is a stable solid solute in water, only decomposes at high temperatures(softscbools,2019). Sodium ions will attract chlorine ions and form an ionic bond.

In this original experiment, it’s to determine the solubility of potassium nitrate and sodium chloride in water for the effect of temperatures and construct a solubility curve (Pearson chemistry Unit1&2 Skills and Assessment 2019). The solubility of salt refers to the increasing the concentration of salts in intervals of 1 g which will be dissolved and crystallise per 5ml of solvent in distilled water at a different temperature. (textbook explanation) ….

Modification to the methodology

To ensure that relevant and sufficient data was collected, the original experiment was extended by It’s important to review and understood the risk assess and handling procedures of all the equipment, hazardous chemical used for the experiment.

During the experiment, there was an effect of temperature in the solubility of both types of solute.

Table 1. Temperature of crystallisation results of KNO3 and NaCl in different concentrations

Raw data was processed to determine the temperature at which 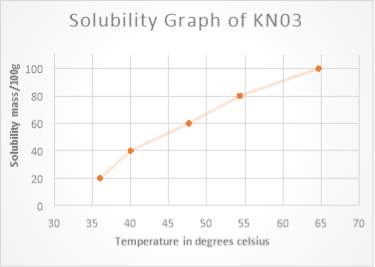 It is suggested that

There is evidence that

There is a complex relationship between … and