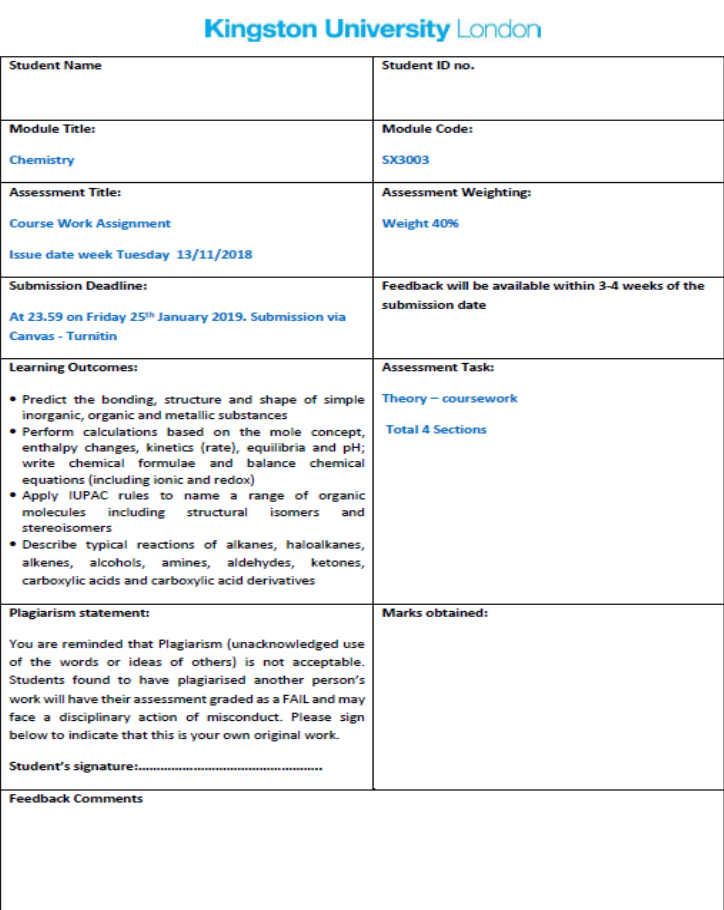 1a) Process of distillation of crude oil in Petroleum Refining

Petroleum is classified as a fossil fuel. Fossil fuels take millions of years to form; therefore petroleum is considered a non-renewable energy resource. Current estimations tell us that within the next few decades, this resource will no longer be available.

Petroleum refining is the process of converting crude oil into useful products for industrial usage and its necessities used on a day-to-day basis, such as Gasoline, Diesel, Fuel Oil etc. During the process of Petroleum Refining, the hundreds of hydrocarbons in crude oil are separated and converted into these useful products. (Organic Chemistry, John E. McMurry).

Petroleum Refining is shown through three different stages; separation, conversion and treating. Separation is where the distillation process occurs. Distillation is when condensation occurs through the use of thermal energy for liquids. The heated crude oil enters a tall fractionating column, which (as the diagram shows, it’s warmer at the bottom- reaching 400 °C and cooler at the top, starting at 20 °C). The crude oil is heated by a furnace, in which the hydrocarbons can be separated into different boiling points. The lighter fractions reach the top of the tower where they condense into a liquid state; here they’re at a low boiling point. The heavier fractions stay at the bottom of the tower and have a high boiling point. Each of the fractions contain hydrocarbon molecules and a similar amount of carbon atoms. (Petroleum.co.uk – accessed – December 2018) 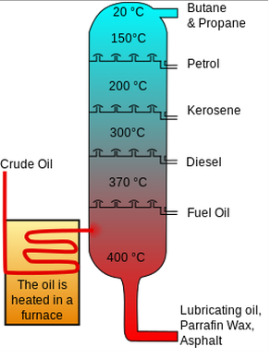 1b) Describe the process of catalyst cracking in Petroleum Refining

The catalyst cracking happens during the second stage of petroleum refining. This process is needed because the heaviest fractions including gas oil and residual oil are lower in value than some of the other lighter fractions. This process is used to break apart the molecules in these heavier fractions. Through this, the end products will have a higher value. Jet fuel and gasoline are produced from the utilization of cracking that are initially heavy gas oils. (www.e-education.pdsu 2019)

Catalytic cracking is used in petroleum refining to break down long chains of hydrocarbons into simpler molecules (smaller hydrocarbons) by breaking the ‘carbon-carbon’ bonds. Large hydrocarbons are vaporised and placed over a hot catalyst. The chemical bonds within the hydrocarbons are broken down by the heat, this makes them smaller and so they’re much more efficient for during the usage (also known as thermal cracking). Catalyst cracking is a necessity in the process of Petroleum Refining as using large hydrocarbons within oils is not an efficient way to produce fuels. So by breaking it down into smaller alkanes and alkenes, it’s more useful during the production of fuels and alkanes specifically in the process of making polymers.  (BBC Bitesize – accessed December 2018)

From my research , I know that Hexane can be cracked under a high pressure and high temperature of butane and ethane.

A Buffer solution is an environmental solution, which resists the specific changes in the pH when either an Alkaline or Acid is added to it (Chemguide, accessed – 2019)

Examples of Buffer solution used on a day-to-day basis: Inside the human body, the main buffer that is in use, is in the blood stream. Carbonic Acid and Hydrogen Carbonate work together to maintain a dynamic equilibrium in the body to disallow a very acidic or alkaline solution. They maintain the pH and temperature too so cells in the mammalian body do not denature the body system failures. Another example in the body, is that the buffer solutions are used in the skeletal muscles during exercise – the Haemoglobin binds to specific proteins during contraction and dilation. With things that are used by humans; a buffer is used to balance out the alkalinity in the soap of a shampoo. During the fermentation of alcohol, a buffer is used to maintain the pH and thus produce a maximum yield of alcohol. And in the manufacturing of glue, some ingridients inside it can change the pH within solution change, the buffer here is used to withstand the changes during the manufacturing of glue. (chemsitewebsite,weebly.com – accessed in 2019)

A weak acid: A weak acid is a chemical solution which cannot fully dissociate with water. Meaning the hydrogen ions cannot fully bind to the water molecules. This can be presented by H3COOH(aq) ⇌ CH3COO– (aq) + H+ (g)   – (John E. McMurry, 2017 and ThoughtCo, 2019)

The weak acid aspirin is partially dissociated in an aqueous solution with sodium salt.

– When the base is added to sodium salt-

Here we can see that the newly added hydroxide ions OH are removed by the ‘Hasp’. This forms asp and H20, this means that the pH would remain constant. (Chemguide.co.uk, 2019)

1c)  There is a discrepancy of 10kJmol-1. The value from section (a) is more likely to be accurate as this data was collected from an experiment, however the average bond enthalpies used in section (b) are a standard. 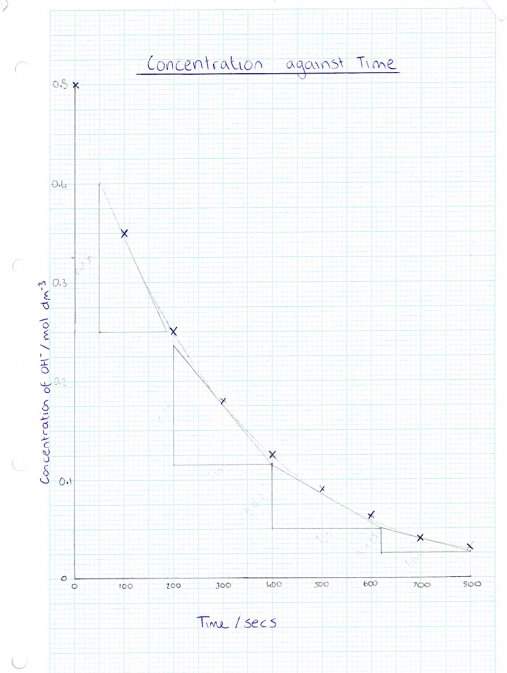 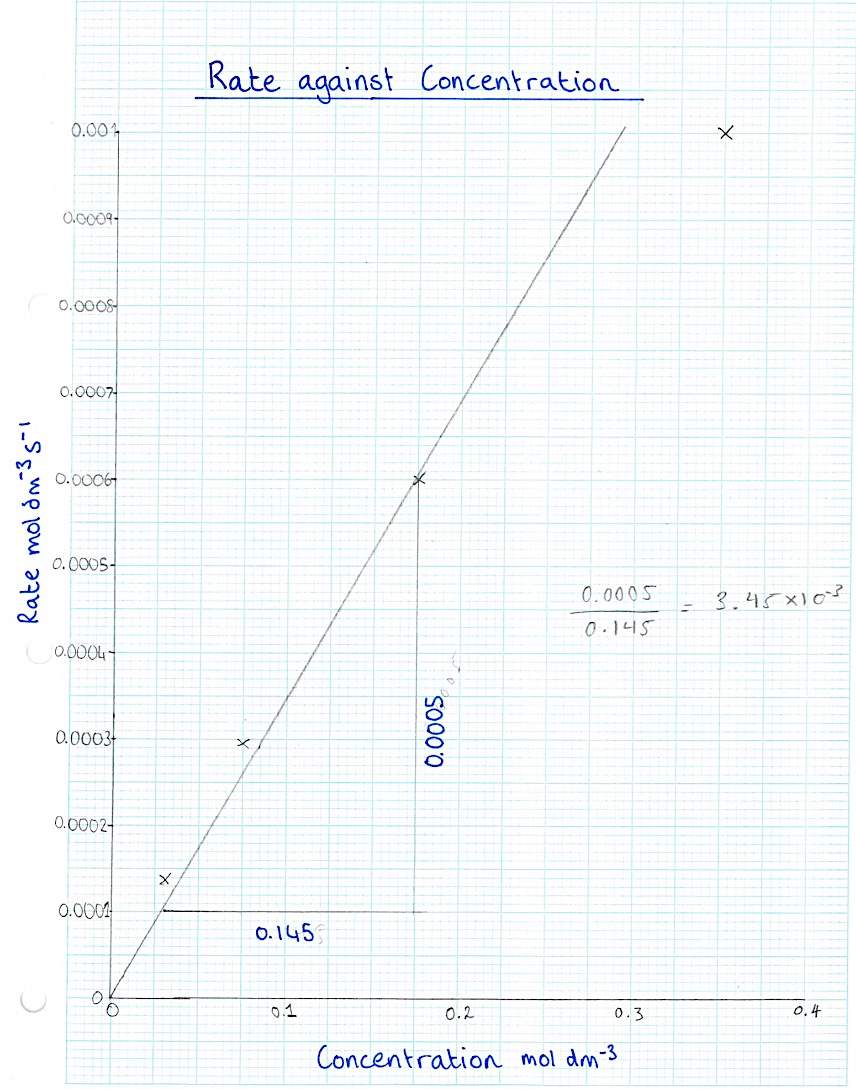 4d)  The order of reaction is in the form : y=mx+c (which is the equation for a straight line). As the graph goes through the origin, c  = 0 and m is the gradient, in this case k. (Kingston university resources)