Theoretical studies on 5- fluorouracil to calculate its dipole moment, and how the values compare with other pyrimidine analog (namely uracil and thymine) and that of literature.

The purpose of this experiment is to calculate the dipole moment of the anticancer drug, 5- Fluorouracil, and compare the numerical value with that of two other pyrimidines, Thymine and Uracil. 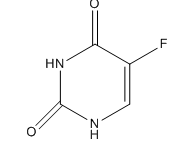 5- Fluorouracil is apyrimidine analog (nucleoside analogs that mimic the molecular structure of pyrimidines) of uracil molecule that functions as an anti-cancer drug; it is used in the treatment of several types of cancer, including that of rectum, colon, head and neck cancer.10 5- Fluorouracil belongs to the family of drugs called theantimetabolites. Antimetabolite drugs function by impeding vital biosynthetic processes or by being assimilated into macromolecules, and inhibiting their normal functioning. The fluoro pyrimidine drug, 5-fluorouracil (5-FU) does both.9Cancer cells often use more uracil than normal cells, which indicates that uracil metabolism is a potential target for antimetabolite chemotherapy.9 “The mechanism of cytotoxicity of 5-FU has been ascribed to the misincorporation of fluoronucleotides into RNA and DNA and to the inhibition of the nucleotide synthetic enzyme thymidylate synthase.”9 Thymidylate synthase is an enzyme that catalyzes the conversion of deoxyuridine monophosphate (dUMP) to deoxythymidine monophosphate (dTMP). dTMP is one of the three nucleotides (dTMP, dTTP, and dTDP) that eventually produce a thymine molecule. With inhibition of Thymidylate synthase, an imbalance of nucleotides results and increased levels of dUTP arise. Both of these factors cause DNA damage, therefore ultimately inhibiting cell replication.

5 FU is also seldom found in skin creams used for other conditions. However, it should be used in moderate/regulated amounts since the side effects of unregulated exposure can be severe.10

5-Fluorouracil is a derivative of Uracil. Another structural analog of Uracil is Thymine. As can be seen from the figure below, the molecules only differ in what substituent each has on C-5.

Thymine is one of the four nucleobases of DNA. Uracil is the RNA analogue of Thymine. Unlike Fluorouracil, these bases are regularly used by a healthy cell to construct new nucleotides (for multiplication, repair, etc.) 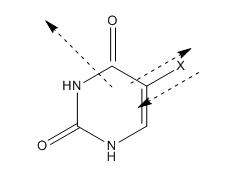 Fig 3: Vector scheme of dipole moments in uracil and in its derivatives6 (reproduced using ChemBioDraw)

For this Lab, the Gaussian software was used in calculating the dipole moment. At first, the molecule of concern was drawn using the software. Then ‘Edit’ option is selected to ‘Symmetrize’ our subject molecule. After that is done, we perform Gaussian Calculation Setup, by selecting Job Type as ‘Energy’, and under Methods changing the Basis set. The numerical value of the dipole moment is obtained from the ‘Results’ of the .chk file.

The Gaussian calculation is repeated by selecting other Basis sets.

The whole process is repeated for the molecules Thymine and Uracil. The molecule is drawn using Gaussian, and the Gaussian calculations repeated by selecting different ‘job types’ and ‘basis sets’.

The results obtained are represented in tabular form. The screenshots of the molecules as drawn in the Gaussian software are also given.

Table 1: The theoretical and Literature values of 5-Fluorouracil dipole moment

Table 2: The theoretical and Literature values of Uracil dipole moment

Table 3: The theoretical and Literature values of Thymine dipole moment. 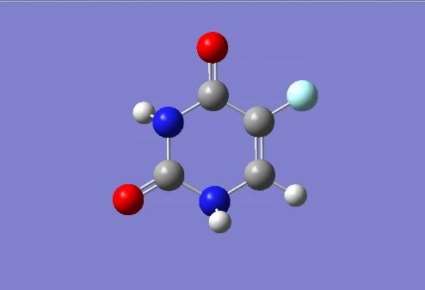 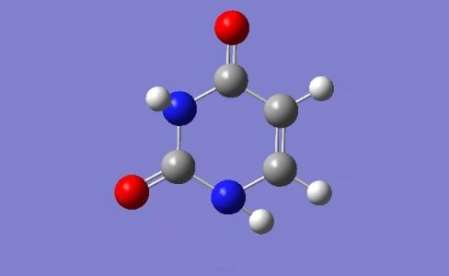 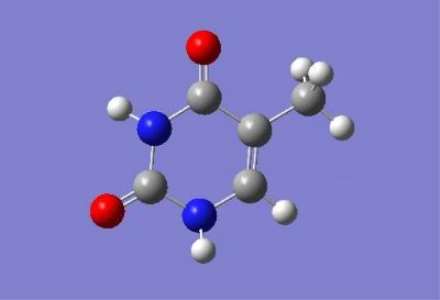 The purpose of this experiment was to calculate the numerical values of dipole moments of the anticancer drug, 5- fluorouracil, and two other pyrimidines, thymine and uracil, and compare the obtained values with that of literature values. The dipole moment of a bond is defined as the mathematical product of the magnitude of the charges and distance between atoms under consideration11. The numerical value of the dipole moment can be calculated for each bond, as well as for the entire molecule. In this experiment, we use the Gaussian software for the calculation of dipole moments.

The calculation of dipole moment is based on the allocation of atomic charges to the atoms in the molecule in a reasonable way.4 In the hands on experiment, this consists of assigning electronegativity values to the atoms and experimental structural information of the bonds. Topological methods, however, do not take in information about the molecular geometry or the conformational status of the molecule. The topological method currently in use is the Gasteiger-Hückelmethod, which has the disadvantage of omitting the validation procedure. This renders the study impractical.11

The method of computation of partial charges employed in this experiment is based on the quantum mechanical calculation of wavefunction.11 For this report, wavefunctions were obtained using the ab initio method. Ab initio means based on first principles, these methods are based on quantum mechanics and attempt to solve the Schrödinger equation. “Ab initio methods use no experimental parameters in their calculations, although they use some mathematical approximations. The major disadvantage of Ab Initio quantum chemistry is the heavy demands on computer power.”12

The choice of basis set is one of the most important aspects of this computation, as our results depend vastly on the basis set employed. Basis sets are quantum chemical units of energy; basis set contains mathematical functions that can be used to determine the dipole moment, energy, and other quantum mechanical properties of an atom/molecule of study. Basis sets are considered to represent the wavefunctions of the electrons in the species.12 On the basis of atomic point charges, a molecular dipole moment can be calculated in a quite simple and fast way, and compared with literature values. To get reliable results using this method, one must select small and rigid structures.11

As the dipole moment is a property defined by quantum mechanics, wavefunctions can be used to directly calculate its values. Results derived with large basis sets (such as those reported in this paper) are in good agreement with experimental values. As we can see, our calculated values of the dipole moment align quite closely with the experimental values. One fact, however, stands out: the values of dipole moment get closer to the ‘literature values’ as the basis set is increased. However, quantum mechanical methods are not very useful when obtaining information about larger molecules.11

The dipole moments of uracil, as well as of its respective derivatives are listed in Table 1, Table 2 and Table 3. First of all, it can be noticed that all these molecules have pretty high values for dipole moments, compared to other aromatic molecules.4 This increase seems to be mainly due to the large electronegativity of the O atoms (resulting in large numerical values of the dipole moments of carbonyl groups) which amount to 4 Debye units in thiouracils, according to Schneider and Halverstadt 13 This value can be contributed to the relatively high polarity of the secondary amide carbonyl group in these compounds, as compared with the generally observed value of 2.2–3 Debye units.4

Thymine differs from uracil in having a methyl group (-CH3) on C5. The main chemistry to understand here is that of the inductive and mesomeric effect. “Methylation at C5 and C6 mainly causes changes in the polarity of the C5–C6 bond by way of increasing the ~-electronic charge on the atom at which substitution takes place.”6 Due to the positive inductive effect of the –CH3 group, electrons are pushed towards the aromatic ring. This adds to the ‘electron pull’ of N3 and contributes to the overall polarity of the molecule.

It can be noted that substitution at C5 does not alter the dipole moment of uracil as much as a substituent on C6 would. (Since the substituents at C5 and C6 are differently oriented). For uracil, the dipole moment is directed in the N atom inbetween the carbonyl groups (as shown in Fig 3). However, the dipole moment is a more complicated calculation than can be inferred from a diagram as simple, lots of other data (such as bond angles) also have to be taken into account.

The purpose of this experiment is to calculate the dipole moment of the anticancer drug, 5- fluorouracil, and compare its value with that of literature, and two other pyrimidines, thymine and uracil. Based on the data obtained with 5 FU, the experiment can be deemed to be successful, as it contains about 1-2 % error with respect to literature. In summary, we have demonstrated that these Gaussian calculations is an easy and convenient way to determine many physical and spectroscopic properties of these molecules in solution and can give an additional insight into their in vivo properties.1