Carbon felt and carbon cloth are used as a cathode in Magnesium-Hydrogen peroxide fuel cell. The performance of the cathode are tested in a 30 cm2 area single cell assembly along with 0.68M NaCl as anolyte and 0.5M to 2M H2O2 + H2SO4 solution as catholyte. The cell was tested in different concentration of the reactants and at temperatures 35 to 70°C. Carbon felt cathode was shown better performance than carbon cloth. The maximum current density achieved at cell voltage 1.11V was 80 mA cm-2.

The Mg–H2O2 fuel cells possess advantages of environmentally benign and low costs, prior to commercialization further improvement is necessary. The cathode materials used in Mg–H2O2 fuel cell are the key components, which determine the performance and stability of the cell [7]. Extensive studies were carried out and explored the substrates suitable for cathodic materials and hydrogen peroxide reduction reactions [6, 8]. Benette et al [9] has used fabricated Microfibre carbon electrode (MCE) as cathode in Al–H2O2 fuel cells, the fabricated MCE was covered by Pd/Ir clusters using a textile flocking technique. The MCE has shown a maximum power density of 90 mW cm-2 with increased loading of Pd/Ir on cathode to 10 mg cm-2. Carbon and Nickel foil substrates have been studied comparatively with Pd/Ir catalyst in Mg–H2O2 fuel cell. The cell voltages of 1.3V and 1.5V were obtained with nickel foil and carbon substrate catalyzed by Pd/Ir catalyst at 25 mA cm-2 [10].

To achieve a better performance and stability, besides a high catalytic activity of the catalyst toward the hydrogen peroxide reaction, the properties of the material for cathodic catalysts should be considered. Considering above aspects, carbon can be a good choice for its excellent corrosive resistance in different media. However, it is of challenge to prepare a carbon based substrate with both high electronic conductivity and good mechanical property [11].

In the present study, carbon felt and carbon cloth has been used as cathode. The fuel cell was operated in various concentrations of 0.2, 0.5, 1.0, 1.5 and 2M hydrogen peroxide and sulfuric acid as catholyte and 0.68M NaCl as anolyte. The performance of the fuel cell in comparison with carbon cloth and Carbon felt was investigated at temperatures 35 to 70°C and at flow rates 20, 50, 100 ml min-1.

All materials used in this study are reagent grade quality and used as received from SRL chemicals, without further purification. All solutions are prepared in deionised water. The anode used in AZ61 magnesium alloy supplied by Omega Enterprises. The cathode used in carbon cloth and Carbon felt supplied by Nickunj Eximp Ltd.

The performance studies for carbon cloth and Carbon felt as cathode were performed in homemade Mg-H2O2 fuel cell of area 30 cm2 area single cell assembly. The active area of the electrode was 5.5 cm × 5.5 cm. Nafion 117 membrane was used as a PEM membrane. The distance between the membrane and electrodes is 1 mm for Mg–AZ61 anode as well as cathode (Carbon felt and carbon cloth). The testing of the cell was carried out by feeding different concentrations hydrogen peroxide and sulfuric acid at cathode and 0.6M sodium chloride solution at anode. The flow rates of the mixture of hydrogen peroxide and sulfuric acid and sodium chloride solution are supplied at 20, 50 and 100 ml min-1 by calibrated peristaltic pumps. The cell was tested at temperatures of 35, 40, 50, 60 and 70°C and at 1 bar pressure. The cell temperature was controlled by plate heaters fixed to the cell.

The current in the cell has been increased in step wise of 0.5A and the corresponding voltages were recorded. Initially the OCV of the cell with carbon cloth as cathode is ~2.04V and with Carbon felt is ~2.14V. This is ~2.0V lower than the theoretical voltage this may be due to the resistance of the cell materials, and mixed potential at the anode and cathode from simultaneous oxidation of H2O2 to H2O and O2 [12].

Mg-H2O2 fuel cell is operated at temperatures 35, 40, 50, 60 and 70°C. Fig. 1 represents the electrode polarization curve at different temperatures. It can be seen that the performance of the cell improved with the increase in temperatures from 35–70°C. At current density of 60 mA cm-2 the voltage was increased from 0.86V to 1.41V with increase in temperatures from 35–70°C. This behavior of the cell is due to reduction of hydrogen peroxide in high temperatures [6]. Even though the cell performance increased, the instability in the mass transport region at higher current densities may be attributed to formation of gas bubbles due to the decomposition of hydrogen peroxide during discharge process [7]. 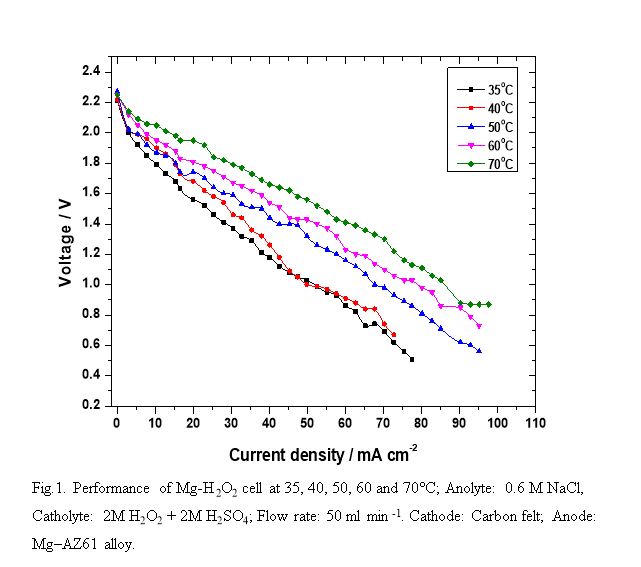 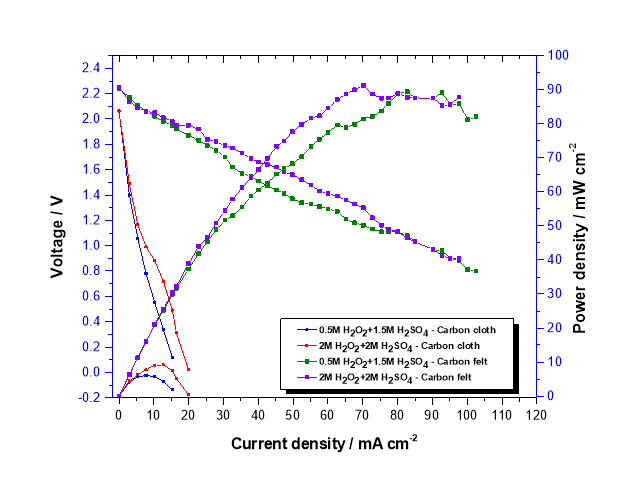 Fig.3 shows the operation of Mg-H2O2 fuel cell in flow rates of 20, 50 and 100 ml min-1. For both anode and cathode electrodes flow rates are kept constant. 0.6M NaCl was fed at anode and 0.5M H2O2 + 1.5M H2SO4 and 2M H2O2 + 2M H2SO4 was fed at cathode during operation of the cell. The curves have been recorded at temperature 70°C. The performance of the cell shows that as the flow rate increase from 20 to 50 ml min-1 there is an improvement in performance of the cell. The flow rate was increased further 50 to 100 ml min-1 but no significance improvement can be seen in the performance. 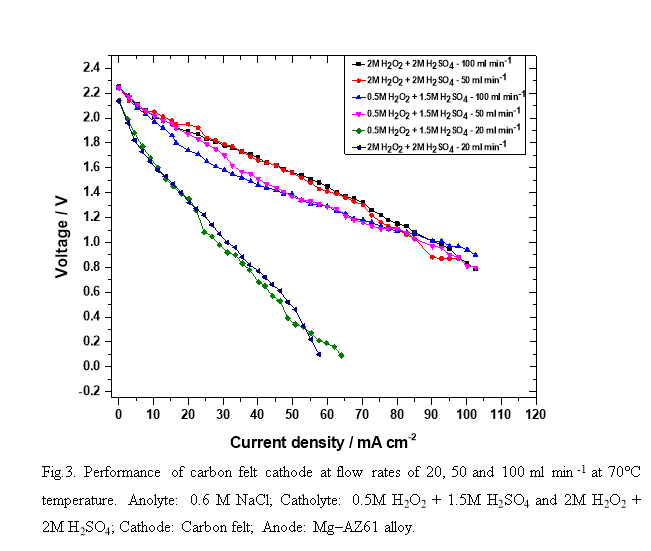 The stability test for Mg-H2O2 fuel cell with carbon felt as cathode was conducted and represented in Figure 4. The measured OCV was 2.2V and the fuel cell was operated at constant current density of 50 mA cm-2 for 300 minutes. During the constant current mode operation the voltage was 1.15V and constantly decreased to 0.8V for a period of 50 minutes, during the first cycle. This is due to the consumption of Mg AZ61 anode, and was replaced with a fresh Mg AZ61 sheet for every cycle. The humps observed in the figure 4 represents cycles. 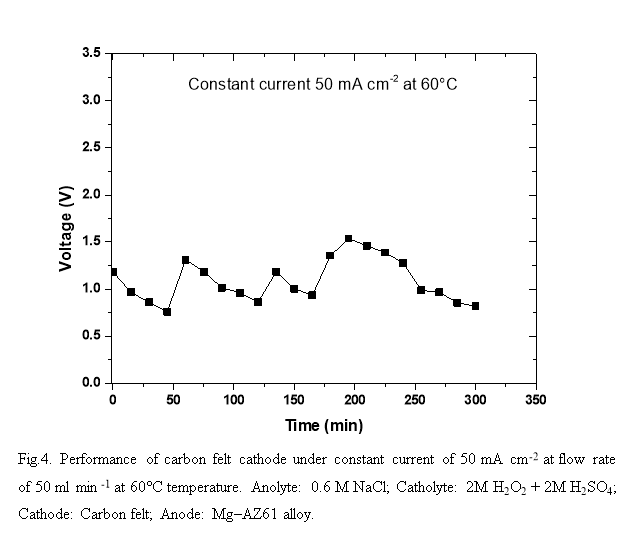 Carbon felt cathode has shown better performance in comparison with carbon cloth. Carbon felt shown a better performance with maximum power density of 91 mW cm-2 at 1.3V for 2M H2O2+2M H2SO4 which is higher than all the cathodes used and high current density of 70 mA cm-2 at voltages 1.3V and 1.16 for 2M H2O2+2M H2SO4 and 0.5M H2O2+1.5M H2SO4 concentrations which is very high in comparison with carbon cloth.