“Hard water” has high mineral content in compare to “soft water”. Generally the hard water is not harmful to one’s health, but can cause serious problems in industrial settings, where water hardness should be monitored to avoid breakdowns of the costly equipments that handle water. The hardness of water is determined by the concentration of multivalent cations in water. The most common cations found in hard water include Ca2+ and Mg2+. The presence of dissolved carbonate minerals (CaCO3 and MgCO3) provide a temporary hardness in water, which can be reduced either by boiling the water or by addition of lime (calcium hydroxide) [1, 2]. On the other hand the dissolved chloride minerals (CaCl2 and MgCl2) cause the permanent hardness of water that can not be removed easily, as it becomes more soluble as the temperature increases [3]. In that sense it is very important to identify the permanent hardness of water before use.

The FRET phenomenon may be very effective tool for the designing of hard water sensors. Based on the FRET between two laser dyes here we demonstrated a hard water sensor. To the best of our knowledge this could be the first attempt, where FRET process has been used for the detection of the hardness of water. FRET between two molecules is an important physical phenomenon, where transfer of energy from an excited fluorophore to a suitable acceptor fluorophore occurred [4, 5]. This technique is very important for the understanding of some biological systems and has potential applications in optoelectronic and thin film devices [6–10]. Combining FRET with optical microscopy, it is possible to determine the approach between two molecules within nanometers. The main requirements for the FRET to occur are (i) sufficient overlap between the absorption band of acceptor fluorophore and the fluorescence band of donor fluorophore and (ii) both the donor and acceptor molecule must be in close proximity of the order of 1–10 nm [4, 5]. The intervening of solvent or other macromolecules has little effect on the FRET efficiency. If the distance between the donor and acceptor changes then FRET efficiency also changes.

In this chapter of the present thesis we tried to investigate the effect of Mg2+ or Ca2+ or both on the FRET efficiency between two fluorophores, Acf and RhB in presence of nanoclay sheet laponite. Here we have chosen Mg2+ or Ca2+ because the presence of these two cations mainly determines the extent of hardness of the water. Our investigation showed that FRET efficiency decreases with increasing salt concentration. It has also been demonstrated that with proper calibration, FRET between Acf and RhB can be used to sense the hardness of water.

Both the dyes Acf and RhB were used in our studies are cationic in nature. The clay mineral used in the present work was Laponite. Dye solutions were prepared in Milli-Q water. For spectroscopic measurement the solution concentration was optimized at 10−6M. In order to check the effect of hard water components (Ca2+ and Mg2+ ions) on spectral charecteristics, MgCl2 and CaCl2 were added to the dye solution. The clay dispersion was prepared using Millipore water and stirred for 24 h with a magnetic stirrer followed by 30 min ultrasonication before use. The concentration of clay was kept fixed at 2 ppm throughout the experiment. To check the effect of clay on the spectral characteristics the dye solutions (Acf and RhB) were prepared in the clay suspensions (2 ppm). In order to check the effect of salt on spectral characteristics in presence of clay, first of all the salts were added in the clay dispersion at different concentration. Then the dyes were added in the salt mixed clay dispersions. In all cases the clay concentration was 2 ppm and the dye concentration was 10−6M.

FRET between Acf and RhB has already been studied and the results are shown in details in chapter 5 of this thesis. Here in this chapter we have used this same FRET pair for the sensing of water hardness. Our main purpose is to detect CaCl2 and MgCl2 or their mixture as a permanent hard water component in aqueous solution by using the FRET process between Acf and RhB. Fluorescence spectra of aqueous solution of Acf-RhB mixture in presence of MgCl2, CaCl2 and their mixture (CaCl2+MgCl2) have been studied (figure 7.1). For all the cases, the concentration of CaCl2/MgCl2/their mixture was kept at 0.06 mg/ml, which is the initializing concentration of hard water known as moderately hard water. 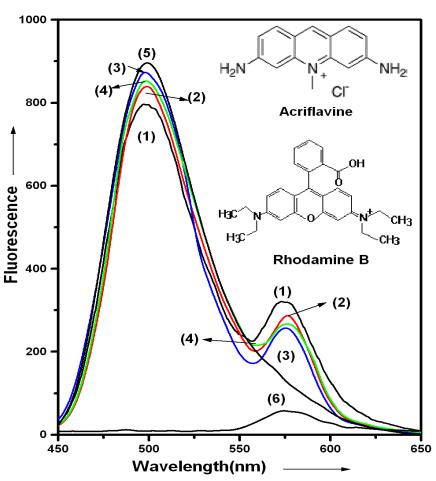 It was observed that the transfer of energy from Acf to RhB decreased in presence of salt (shown in table 7.1). The FRET efficiencies are calculated by using the Förster theory. The introduction of cationic Ca2+ and Mg2+ ions in the solution may cause an increase in the electrostatic repulsion between cationic Acf and RhB molecules which can result in a large intermolecular separation. Accordingly, the FRET efficiency decreases. 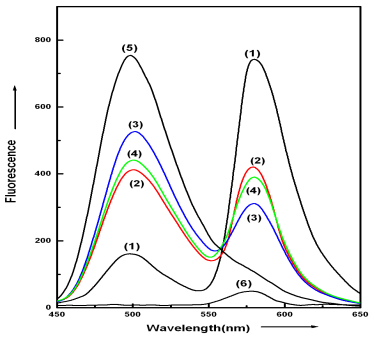 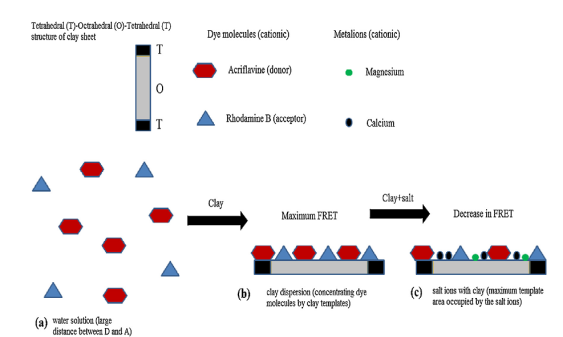 Fig. 7.3. Schematic representation of FRET between Acf and RhB in presence of clay and salt.

The decrease in FRET between Acf and RhB in presence of hard water components, must involve the reaction of the cations (Ca2+ and Mg2+) present in hard water with the clay minerals through cation exchange reaction. In general, this bonding energy is of the order: Ca > Mg > K > H > Na. Thus the probability of adsorption of Ca2+ in clay suspension is more than Mg2+. The tendency of Ca2+ ion to interact with the negatively charged clay layers is more compared to Mg2+ ion of same concentration of both clay suspension and salt solution. Accordingly, most of the negative charges in the clay surfaces are neutralized by Ca2+ ion compared to Mg2+ ion and there exists very few unoccupied negative charges on the clay surface for the cationic dye molecules to be adsorbed. As a result the separation between the cationic dye molecules increases more in CaCl2 solution rather than MgCl2 leading to a less FRET in presence of CaCl2 compare to MgCl2 (shown schemetically in figure 7.3). 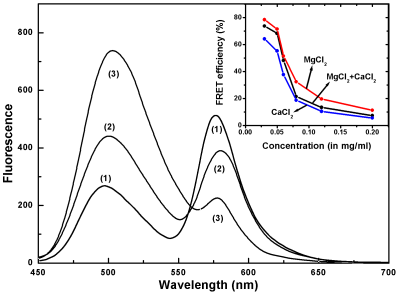 In the process of hard water sensing first of all clay (laponite) dispersion will be prepared using the sample water followed by addition of dyes (Acf and RhB). By observing the FRET efficiency between Acf and RhB it would be possible to sense the hardness of the test water. 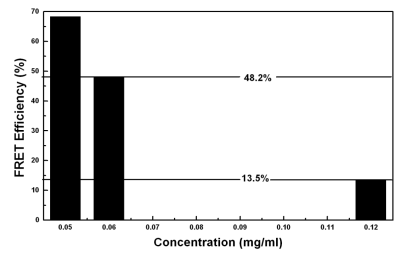 Fig. 7.5. FRET efficiency of Acf-RhB mixture for the different concentration of CaCl2 + MgCl2 in presence of clay (values of FRET efficiencies were calculated from spectra of Fig. 7.4).

In order to demonstrate hard water sensor based on FRET, we have investigated the FRET between Acf and RhB in presence of salts CaCl2 or MgCl2 or both. It was observed that the presence of hard water components Ca2+ or Mg2+ or both affected the FRET efficiency to a large extent. In presence of CaCl2 or MgCl2 the FRET efficiency is decreased to 37.78% and 51.59%, respectively. With suitable calibration of these results it is possible to design a hard water sensor that can sense the water hardness within the range 0.03–0.2 mg/ml. Here the incorporation of clay platelate laponite enhances the sensing efficiency.