Sensitive And Selective Detection of Pesticides in Foods Using Chemiluminescence

Pesticides are widely used in agriculture to protect seeds and crops before and after harvesting. They have contributed significant economic benefits to society. At the same time, widespread use of pesticides has created serious problems regarding their effect on the environment and human health.[1]. Even low levels of contaminants can cause adverse effects on humans, animals, plants, and ecosystems. The application of pesticides has increased appreciably during the past few years, resulting in a potential risk for the human health.[2] .During recent decades, the number of publications on pesticide residue analysis has increased significantly, and important advances have been made in the development of methods for a wide variety of sample types[3].

N-methylcarbamates (NMCs) are commonly employed as pesticides, the structures show in figure 1. Their main characteristics of NMCs are low stability, high toxicity, and non-accumulation in organic tissues. Some of the NMCs, including carbaryl, carbofuran and methiocarb, are considered in the final list of compounds to be considered for periodic re-evaluations by the Joint FAO/WHO Meeting on Pesticide Residues (JMPR)[4]. 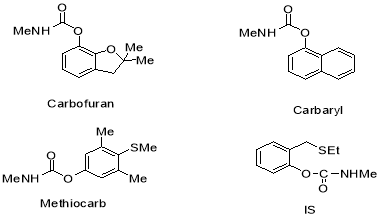 Fig.1 Stucture of the selected N-methylcarbamates

Analysis of pesticides in food, environmental, forensic and clinical samples is a difficult task because of the low concentration values and matrix complexity of the target compounds.

Gas chromatography (GC) has been widely used for pesticide analysis in food, clinical and environmental samples due to its high selectivity and sensitivity [5]. However, some analytes are not suitable for GC separation because of their low volatility, thermal lability or high polarity. Phenylurea, carbamate, benzimididazole some pyrethroid,, organophosphorus, and quaternary ammonium derivatives are examples of such pesticides[6] .

Chemiluminescence is defined as the emission of light as the result of a chemical reaction[7]. Chemiluminescence (CL) is one of the highest sensitive analytical techniques for the detection of pesticides, due to the high dilution of these substances in environmental samples and compounds in a great variety of matrices depending on their participation in a CL reaction as catalysts, precursors, oxidation, inhibitors and so on.

Chemiluminescence (CL) has been revealed as an excellent tool for the detection of pesticides.[9] .The best known example is the luminol (5-aminophthalylhydrazide), The Proposed mechanism of the luminol CL reaction shows in Fig 2, when (5-aminophthalylhydrazide) is oxidated in alkaline medium , it produces the excited 3-aminophthalate anion, which emits light when it is relaxed to the ground state using several oxidants such hexacyanoferrate (III), permanganat and hydrogen peroxide and so on [10]. The reaction presents a powerful application as detection system in flow injection analysis (FIA) or in liquid chromatography (HPLC), where luminol-type compounds can be used as a derivatization reagents allowing the analytes to be detected at very low levels.

A scheme of the HPLC–UV–CL system is shown in Fig. 3. The reversed phase separation was carried out in a C18 column. A peristaltic pump was used to deliver luminol and potassium permanganate . After separation and UV/vis detection at wavelength of 220 nm, with the stream of potassium permanganate and luminol solutions. A mixing reactor (d1) linked both “T” connectors. Another mixing reactor (d2 ), was used to link the outlet of the inlet of the detection cell and the second connector.

The resulting stream was passed to the detection cell and the CL emission from oxidation of luminol was recorded as the background blank signal (baseline). The quantification of carbamates was based on the increase in the CL intensity , calculated as A=[I/IIS], where A is the analytical signal, I is the net CL signal due to the presence of the NMCs in the luminol–KMnO4 system, IIS is the CL signal. due to the internal standard. Ethiofencarb was choosed to be the IS ,due to it is well differentiated from the rest of analytes in the selected chromatographic conditions and also it is a NMC which produced an enhancement of the CL emission from the luminol oxidation by potassium permanganate in alkaline medium.

Recovery experiments were carried out in vegetables to check the applicability of the proposed methodology ,to make sure if it can use in the detection of NMCs in the real sample. No NMCs were detected when a sample blank was analyzed using the proposed method. Three replicates were prepared at each concentration level, and each one was injected by duplicate. obtaining recoveries in the range of 107.7–88.6%. Chromatograms of cucumber sample are presented in Fig. 4.

(A) Blank sample; (B) sample spiked with 50ug kg−1carbofuran and methiocarb and 5ug kg−1 carbaryl.

A sensitive and selective HPLC–CL method was used for the determination of NMCs in vegetables. Compared with other sensitive methodologies which use CL or fluorescence detection, this method is very simple because no derivatization process is needed. the great enhancement produced by these compounds on the CL emission of luminol using permanganate as oxidant makes the resolution of three carbamates (carbofuran, carbaryl, and methiocarb) in less than 14 min possible.

Chemiluminescence Switching on Peroxidase Like Fe3O4 Nanoparticles for Selective Determination of Various Pesticides.[11]

Due to the classical CL systems have very low efficiency which can not transform the chemical energy into light efficiently, so the enhancement of their CL efficiency to give intense emission intensity is one of the most important factors in quantitative analysis. From now on , a number of approaches have been explored for the enhancement of the efficiency. Such as developing intrinsically selective CL switching at the surface of Fe3O4 nanoparticles ,which make a great contribution to the sensitive detection and simultaneous determination of various pesticides. Fe3O4 nanoparticles with high peroxidase-like catalytic activity can catalyze the decomposition of dissolved oxygen to generate superoxide anions at their surface. The surface superoxide anions have high chances to be scavenged in the presence of ethanol. However, the scavenging effect can be effectively inhibited through the specific binding of target molecules on Fe3O4 nanoparticles.

As shown in figure 5, water has no effect on the CL change but ethanol can lead to a significant CL quenching of the luminol−Fe3O4 system. EP is one of the widely used organophosphorus pesticides . there is no CL response of the EP aqueous solution in the luminol−Fe3O4 system by using pesticide ethoprophos (EP) as the target analyte. If we add EP ethanol solution ,which resulting a significant CL enhancement . we can abserved clearly.

As shown in Figure 6A, With increasing the concentration of EP solution to the luminol−Fe3O4−ethanol system, the CL will significantly and continuously enhanced. Such high enhancing response has proved that EP molecules can inhibit the scavenging of superoxide anions efficiently. But not all organophosphorus have this function. As shown in Figure 6B, only EP and PF organophosphorus esters (containing P=O bond) with a phosphorus−sulfur bond (P−S bond) are able to light up the CL systerm in luminol−Fe3O4−ethanol solution.

(A) CL enhancement of the luminol−Fe3O4 ethanol system with increasing the concentration of EP .

In order to make sense of the mechanism of CL switching, we choose the FeCl2 as source materials to study the interaction between EP molecules and Fe2+ ions.

For the purpose of having better understanding of the coordinative groups, we do the theoretical energy calculations, as shown in Fig 7. Due to the important principle of energy minimum, the conformation was optimized as the coordination of sulfur atom instead of the oxygen atom. This result is reasonable because sulfur is more polarizable than oxygen and naturaly has a stronger coordinative bond formation. These calculations and discussions imply that EP molecules will have the strongest coordinative with Fe2+ ions, among the four different pesticides. Therefore, it is reasonable to suppose that the CL enhancement is attributed to the coordination of EP molecules on surface Fe2+ ions that inhibits the scavenging of superoxide anions.

The mechanism of CL switching is illustrated in Figure 8. Firstly decomposition of dissolved oxygen by the intrinsic peroxidase-like catalytic activity of Fe3O4 nanoparticles, we can get the superoxide anions, and due to the high surface-to-volume ratio of the nanoparticles, the resultant superoxide anions will absorb at the surface of the Fe3O4 nanoparticles (1).Then, ethanol reacts with superoxide anions through the radical scavenging process (2) there is no light emission after the addition of luminol (3) EP molecules are first added into the Fe3O4 colloidal solution before adding ethanol, (4). This molecular structure can effectively inhibit the scavenging of superoxide anions from ethanol (5) even if in the presence of ethanol, the addition of luminol still produces a strong light emission (6). The two CL response formats are combined to form a CL “switching-on” chemosensor (7).

Fig 8 Mechanism of CL switching at the surface of Fe3O4 nanoparticles:

The CL “turn-on” chemosensor was used to sensitively detect nonredox molecules specificitly. and has a a lot of application in lab experiment, because of it has the ability to detect molecules of interest in complexed and real samples after a simple magnetic separation.. The very simple and versatile strategy should open a new window of the development of CL chemosensors. And also make a great development in the application of magnetic nanoparticles

Enzyme-linked immunosorbent assays (ELISAs) with chemiluminescent detection for the determination of carbaryl carbofuran and methiocarb were developed recently and the analytical parameters of these assays were compared with those of ELISAs with colorimetric detection. By using the chemiluminescent reagents for the detection of lower concentrations of horseradish peroxidase which can decrease the optimal antibody and conjugate concentrations and to reach better analytical parameters. Both in terms of accuracy and precision, results obtained by ELISAs correlated well. with those obtained by a liquid chromatography–electrospray mass spectrometry (LC/ESI/MS/MS) analysis, and also used as reference method to validate the immunoassays results.

In order to fit into the linear part of the calibration curve and subsequently analysed by ELISA, each primary test sample was subjected to three independent dilutions .The dilution factors applied for the Nmethylcarbamate analysis are shown in Fig 9. 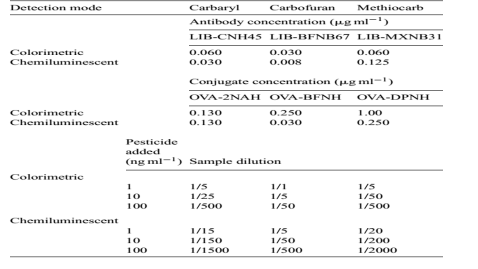 Fig 9. Concentrations of immunoreagents and baby food sample dilutions applied in the ELISAs

The reported results show that the chemiluminescent detection make a great improvement for the analytical performances of carbamates ELISAs. What’s more, the chemiluminescent ones with lower detection limits, can analyse various kinds of non-fatty samples simply and easily, just diluting them. This fact could avoid the extraction procedures and time consuming pre-treatment . Since the problems related with possible matrix effects can be easily overcome by using highly diluted samples. The time required to prepare the samples can be greatly reduced and their number increased significantly in each analytical session, as well as the reagents cost per assay is reduced.

This review mainly introduce three Sensitive and Selective Methods Detecting Pesticides in Foods Using Chemiluminescence, each has advantages and disadvantages.(as shown in the following table). We can choose the appropriate method according to different situations.