The purpose of this experiment was to complete the dehydration reaction of 2-methylcyclohexanol and to identify both the major and minor products through the utilization of gas chromatography (GC).

The objective of this lab was to complete the dehydration reaction of a 2-methylcyclohexanol.  Markovnikov’s Rule states that when a hydrogen-containing species “HZ” adds to the carbon-carbon double bond of an asymmetrical alkene, the hydrogen adds to the carbon that is on the more substituted side. While Zaitzev’s Rule states that when “HZ” is removed to form an alkene, the hydrogen is lost from the carbon on the least substituted side. Although opposite, combined Markovnikov’s and Zaitzev’s rules demonstrate an important conceptual point that organic reactions can be selective (lab notebook, 2017). Organic reactions are considered regioselective when they have the ability to produce two or more structural isomers. Zaitzev’s rule predicts the formation of the most stable alkene, while Markovnikov’s predicts the least stable.

In this experiment 2-methylcyclohexanol was dehydrated in order to create two alkene products; 1-methylcyclohexene and 3-methylcyclohexene. Following Zaitzev’s rule, a hydrogen is removed from the species containing the least number of hydrogens to form the major product. And according to Markovnikov,  the minor product will gain a hydrogen on the most substituted side. The two possible outcomes of the mechanism are demonstrated below: 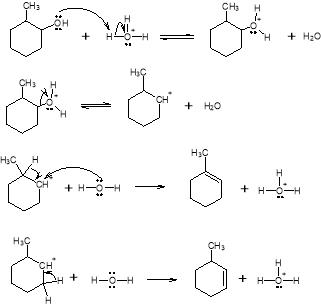 After the distillation, the regioselectivity of the compound was found through GC. This methodology was chosen due to its ability to separate mixtures on the basis of components having different affinities for the stationary phase (Clennan, 2011). The distinction between retention time for each eluted component is thought to reflect relative differences between the components of the mixture.

About 20.0 mmol of 2-methylcyclohexanol was put into a 10-mL round bottom flask (RBF), and then about 0.7 ml of phosphoric acid (85%) was also added and mixed into the RBF. The reaction vessel was then clamped to a ring stand and heated up over a sand bath. The mixture was heated up at a controlled rate, in order for it to be collected slowly in the Hickman well still.  Two conical vials were labeled and weighed. After distillation began, temperature of the still head was noted.

A pipet was used to transfer the distillate into the conical vials until each had been filled to the 1.0mL mark.  Throughout the process the still head temperature was continually monitored, when a noticeable drop in temperature occurred the heat source was removed. Distillate from each conical was washed with 1.5mL of aqueous sodium bicarbonate, and then had its aqueous layer removed.  Afterwards all of the alkene mixtures were dried with anhydrous calcium chloride, and then each sample was massed.

Each mixture was analyzed by gas chromatography; the resulting data depicted results for the products of the dehydration of 2-methylcyclohexane, the peaks measured area and retention time.

The dehydration of 2-methylcyclohexanol had to occur under acidic conditions due to the alcohol not being able to accept protons easily (a dehydration cannot occur in basic conditions).  Phosphoric acid

acted as the catalyst, as it protonated the alcohol and turned it into a good leaving group. A biproduct of the protonation  was the creation of water—which is also a good leave in group. When water leaves, a 2 carbocation is formed.

The GC graph depicts that this is an E1 reaction (elimination and formation of carbocation) and that one of the isomers appeared long before and in a much greater abundance than the other. The drastic differences between the two peaks support the material covered about regioselectivity and therefore led to the conclusion that the first peak (and therefore major product) was 1-methylcyclohexane, which left the second peak (and therefore minor product) as 3-methylcyclohexane.

From a regioselectivity perspective the results make sense; according to Zaitzev, 1-methylcyclohexane should have the higher yield since it has the most stable carbon. And 3-methylcyclohexane should be the minor product—after the alcohol has been protonated and the resulting biproduct water has formed and left behind a carbocation—an unstable disubstituted pi bond is formed (Clennan, 2011).

Like any experiment, errors may have occurred. A potential source of error may have been utilizing simple distillation rather than fractal. Simple distillation is generally used when components of a mixture have large differences in boiling temperatures (>70C). While it was advantageous to use simple distillation in order to avoid any confounding variables (the Evelyn effect), it’s possible that separation was less than ideal. The boiling point of 1-methycyclohexene is 110

and the boiling point of 3-methylcyclohexene is 104

, since the products have lower boiling points than 2-methylcycholhexanol (boiling point of 166

) the data can be used to evaluate fractional distillation. Another potential source of error may have occurred in the GC process–since GC is based on polarity (rather than identity). In order to assure precision and accuracy in results, the GC process should be done several times.

Mass of Each Component: