A catalyst is a substance that makes a chemical reaction speed up or get faster. This can be things like the temperature, concentration, sold or even liquid, (bbc,2017). A catalyst essentially effects a chemical reaction, (bbc2017). For a chemical reaction to start the bonds must be broken for the reactants to fuse or react, (bbc,2017). To break the said bonds one needs energy, (gcse,2017). The name of the energy that breaks the bonds is called activation energy. When a chemical reaction happens the bonds of the reactants break (due to activation energy). After this the energy, must flow through a path for the reactants to react, (gcse,2017). Now because of the activation tacking up energy there can only be at one speed, (gcse,2017). When we add a cat list to this it creates an alternate pathway or a short cut for the energy to pass by. This is because the normal pat way is less effectiveGCSE,2017).Â  The diagram below shows a reactant going through a normal path way and on that is going through on of a catalyst.Â  As you can see the rout of the normal path way is very tedious and long. Whereas the rout of the catalyst is much shorter. 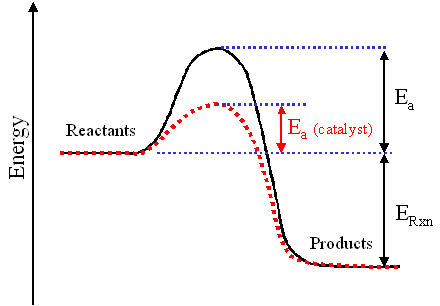 A catalyst can be spilt into two main types. The first is the homogeneous. A homogenous catalyst is one that stays the same phase. The meaning can be found in the first part of word, this is Homo which means one or the same. Pretty much a homogeneous catalyst stays in the same phase, (chemguide,2017).

What is a phase?

To explain this, we must first look at a mixture. Let’s say that there was a stone in water. The stone was a solid and the water was a liquid. This represented a heterogeneous reaction. Now the same thing happened but there was no stone would be a homogeneous. The diagram below shows the different types of catalysts. (chemguide,2017) for the text and the diagram below.

The catalyst it is shone that oxides work the best as catalyst. 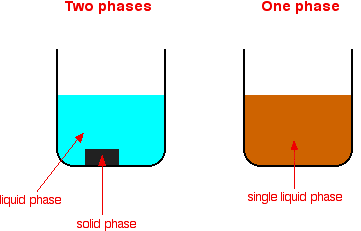 Aim: The aim or this experiment was to see what chemical was to see which catalyst would work the best in speeding up the decomposition of hydrogen peroxide.

Hypothesis: Research suggest that iron nitrate will cause a violent exothermic reaction. With the materials, the group had this catalyst would have worked the best.

The first item that were acquired were the personal protection equipment or ppe. The ese items consisted of safety glasses, rubber aprons and the disposable gloves. After this we collected out materials and went to the steel takes outside. A there were no power points we had to set the scales up inside at a free plug point. After the cake was set up we tested the decomposition of hydrogen peroxide without a catalyst. To do this we poured 25 ml of hydrogen peroxide in a beaker. After this 3the group timed the reaction with a stop watch. After the reaction was finished the results were recorded. This same experiment was done 4 time and all yielded the same result of two minutes. After this iron oxide was added to the hydrogen peroxide. This experiment was timed and done 3 times. The same was done with the other catalysts. All the catalysts were pounders. We measured them to .5-gram ad them added them into to the hydrogen peroxide. 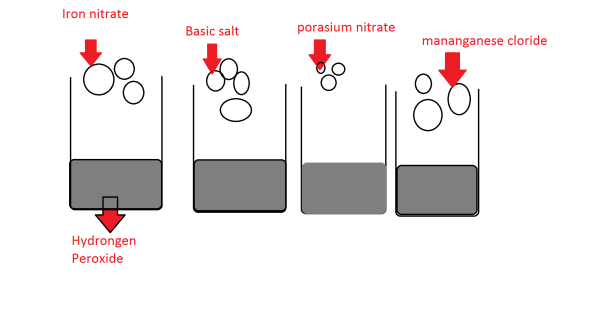 The experiment, “The decomposition of Hydrogen Peroxide,” provide very interesting results. The task was to aid the reaction by the addition of a catalyst. The experiment used a variation of salts, nitrates and chlorides. These catalysts were all 5 grams and were added to a 25 ml of hydrogen peroxide. The ration for this was 1:5. The first experiment that the group did was just recording the hydrogen peroxide by itself as this was used to get a base result. The group did this experiment four time with the decomposition taking 2 minutes to finish. This was the graphed into a line graph and the relax showed the consistent rate of reaction.Â  The main trend was that the nitrates did better than the other catalysts.

The next catalyst added was the Iron nitrate(Fe(no3)). This catalyst produced the most interesting reaction as it created an exothermic reaction. The very moment the catalyst was added with the hydrogen peroxide it created profuse bubbling and the next second the it erupted into what looked like a boiling. the moment the hydrogen peroxide started bubbling the colour of the concoction changed from clear to a burnt orange. After the boiling, had stopped the concoction seemed to turn into a tinted yellow structure. This liquid was steaming and was clearly hot. This whole reaction was conducted three time and took 7.69 seconds on average. With this reaction, my hypothesis was proven to be supported.

The second catalyst was Sodium chloride(NaCl) or basic salt this was by far the most uneventful reaction by far. The sodium chloride was added into the hydrogen peroxide and produced a few bubbles. This happen after the sodium chloride had dispersed. This reaction lasted for 22.77 seconds on average the reaction produced no colour or visible temperature change.

The catalyst Potassium nitrate was also a very un-event full reaction. This did cause very rapid bubbling but it did not result in any noticeable change other than that. This catalyst like many others had no noticeable change. This was also tested times and had an average of 17.07. This was one of the shorter reactions. This aspect lead the group to believe that it was the second-best catalyst. This was also a reaction that stopped after it dissolved.

The last and final catalyst was the Magnesium chloride was also an uneventful reaction. This was the longest reaction and therefore the worst catalyst of all the others. This catalyst sizzled for a long period bit it resulted in nothing happening.

The experiment was interesting as it was it had a range of mixed results. This was shown in this catalyst reaction as some experiments did barely anything and others had very violent notable reactions. There were four catalyst Iron nitrate, NaCl, Potassium nitrate, Magnesium Chloride. These Catalyst had varied effect on the decomposing reaction. For example, results showed that the nitrates did the best. But there was some problem met in this experiment. Due to the reactive nature of the Manganese’s oxide. The group gelled together well and if was a good working relationship within the group. I feel as though the experiment could have been improved. As there may have been some key errors that could have occurred in the experiment. The experiment relayed on measurement for the entirety of it. The hydrogen peroxide had to be measured the catalysts had to be weighed and the time had to be counted by the stopwatch. These could have multiples of faults. Some main faults are in human error. Weather it man have been the wrong set up or parallax error these could all have been done. Another element that could have led to the experiments being wrong could have been inaccurate measuring tools. In some of the instrument the measuring lines could have been rubbed out or flawed. A way of fixing this would be if we used a more accurate item and used an IV Drip so that the use of the there would be a constant drip of fluid. After this I believe that it should be measured by a laser to bake sure that the amount of hydrogen peroxide is precise. The scales should have been swapped out with more accurate scales that pick up even the smallest changes of the object being weighed. When the experiment was, timed human error could have played the part of the timing as the person timing could have been just before or just after the catalyst was added. So, I propose that one would have a timer that was set to go off when the catalyst was added and would stop after the reaction would shop. This would get the most accurate reaction. I feel that is these modifications were done the experiment would have been much more accurate.

In conclusion, the experiment of the decomposition of the Hydrogen peroxide reaction yielded interesting results. The hypothesis was supported as the nitrates did react better than the other catalysts.