Plants produce a large number of diverse natural products or secondary metabolites which are involved in the normal cell growth, development or reproduction of organisms. Some of these compounds offer protection against herbivores and microbial pathogens, while others are involved in defense against abiotic stress, such as UV-B exposure Many of the secondary metabolites have interesting biological properties, which make them desirable candidates for optimization of drug discovery and development processes.

The quinonic moiety is considered by the National Cancer Institute (NCI) as an important biologically scaffold for the development of new bioactive compounds with good levels of cytotoxicity. Clinically important several well-known antitumoral drugs containing a quinone moiety such as anthracyclines, doxorubicin, mitomycin and mitoxantrones and saintopin which are possess a quinonoid structure. These compounds have also been identified as privileged structures due to their biological activity and structural properties that have been linked to the stimulation of oxidative stress and alkylation of cellular nucleophiles in cancer cells.

A representative group of quinonoid compounds of naphthoquinones (1,4-naphthoquinones) constitute one of the largest and diverse groups of plant secondary metabolites which are widely distributed in nature with a wide range of important pharmacological activities 3,4 that include antioxidant, antimicrobial, antifeedent, antiinflammatory, anticancer, and allelopathic activity. Some examples of antitumoral naphthoquinones are plumbagin, juglone, b-lapachol and rhinacanthone.

Plumbagin (5-hydroxy-2-methyl-1,4-napthoquinone, Fig.la) is a medicinal plant-derived naphthoquinone , which is one of the simplest plant secondary metabolite of three major phylogenic families viz. Plumbaginaceae, Droseraceae, and Ebenceae. Plumbagin is also present in black walnut and other various medicinal plants. It was isolated from the roots of the medicinal plant Plumbag0 zeylanica 1. (also known as Chitrak); The roots of Plumbag0 zeylanica have been used in Indian medicine for more than 2,500 years for treatments of various ailments and which exhibits highly potent biological activities, including antioxidant, antiinflammatory, antibacterial, and antifungal activities.

Plumbagin are found in plants as they are thought to be present as a defense mechanism due to their cytotoxicity. It is also used extensively in studies investigating oxidative stress. plumbagin has been shown to exert anticancer and antiproliferative activities in animal models and in cell culture.

The mechanism of anti-cancer activity of Plumbagin is reportedly by induction of mammalian topoisomerase II mediated DNA cleavage.4 Plumbagin has been reported to intercalate into the DNA. It induces higher levels of p21 and thereby inhibits long patch base pair excision repairs leading to apoptosis .

Hybrid drug molecules of plumbagin by combining plumbagin with other appropriate anticancer agents may lead to the generation of novel and potent anticancer drugs with pleiotropic action against human cancers.

our group has been engaged in the design and synthesis of more potent, less toxic, and more selective analogues, through chemical modification of lead compounds isolated from the active extracts. In the course of such studies, we have undertaken the plumbago zeylanica, a well-known medicinal plant. The major quantity coupled with the biological profile of plumbagin (1) prompted us to continue our studies. Thus, present work was undertaken to synthesize a library of plumbagin derivatives to study their anti-cancer properties. We here in report the synthesis, cytotoxic activities and their preliminary structure-activity relationship studies.

to the best of our knowledge no semi-synthetic derivatives of plumbagin derivaties and test for their till date were reported. (Figure 1).

We focused on the synthesis of new of Plumbagin analogues by following routes. As shown in scheme-1, Piperazines and substituted piperazines are most useful pharmacophores that can be found in many marketed drugs, such as the piperazinyl- linked ciprofloxacin dimmers reported as potent antibacterial agents against resistant strains,15 Merck HIV protease inhibitor Crixivan,16 and drugs under development. A novel class of mixed D2/D4 receptor antagonists, dual calcium antagonist, anti malarial agents and potential antipsychotic agents. Recently piperazine derivatives containing tetrazole nucleus have been reported as an antifungal agent and phytochemists had prepared the derivatives of isolated natural products, which are coupling with piperzenes. This piperzene containing natural products enhance the activity than the parent compound. 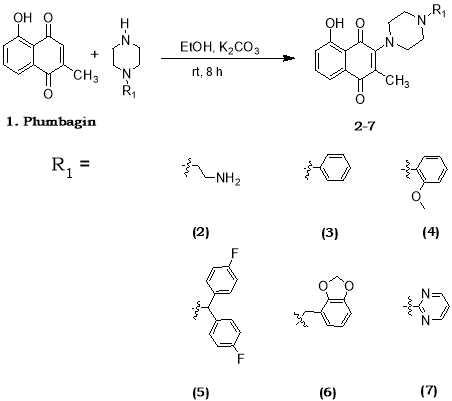 Introduction of propargyl group into hydroxy position of plumbagin

Preparation of oxime derivatives of plumbagin by substituted acids and substituted piperzines.

As shown in scheme 3.3 plumbagin (1) was first subjected to methylation on 0H group of plumbagin and then 9 is treated with NH30H.C1, CH3C0ona in EtoH solvent under room temparature conditions for 6 h to yield corresponding to oxime of 5-0-methyl Plumbagin(lo), it was planned to prepare the new ester derivatives of oxime of 5-0-methyl Plumbagin with various aromatic substituted aromatic carboxylic acids by using standard esterification strategies viz: DDC/DAMP, EDCI/DAMP. Despite the considerable experimentation, however, ester derivatives were never being obtained and moreover, in all cases starting material was completely recovered. In view of these discouraging results, we decided to implement the Yamaguchi esterification protocol (2, 4, 6-trichlorobenz0yl chloride, Et3N, THF, DMAP, toluene) to access ester derivatives. to our delight, the reactions proceeded smoothly to yield the target compounds in moderate to good yields. The structures and yields of all synthesized compounds (ll–21) and the yields were in the range of 80 to 95%.

oxime of 5-0-methyl Plumbagin(lo) treated with propargyl bromide in presence of K2C03 in acetone solvent under roomtemparature conditions for 8 h to yield corresponding propargyl oxime of 5-0-methyl Plumbagin (22) in 90% yield. According to mannich reaction 22 was treated with secondary amines as substituted piperzines in presence of formaldehyde in ethanol solvent under roomtemparature conditions for lo h to yield corresponding propargyl oximes of 5-0-methyl substituted piperzine plumbagin analogues (23-26) (scheme 3.4) in 85 to 90% yield. 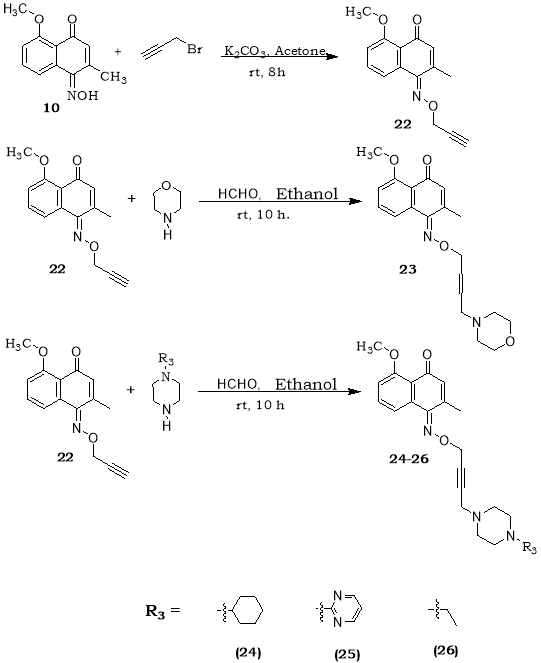 All the compounds were synthesized for the first time and well characterized by 1H NMR, 13C NMR and ESI HRMS.

Cancer is one of the most serious threats on human health in the wor1d. The mortality and morbidity of cancer patients is the second highest among all diseases in the wor1d, after heart disease. over the past few decades, extensive research has led to the development of a plethora of chemotherapeutic agents; however, none of these agents are capable of completely eliminating cancer. The limitations of current anticancer drugs, increased incidence and rapid development of drug resistance have highlighted the need for the discovery of new anticancer agents, preferably with novel mechanisms of action. to identify new chemical entities for a more effective treatment of cancer, drug designers can follow many strategies, but the crucial decision is always the selection of a suitable starting point from the vast chemical space .

In this respect, natural products can be viewed as evolved privileged structures and biologically pre validated leads, in other words, as molecules that have probably evolved evolutionarily to exert highly specialized functions. Recent review pointed out that, about 74% of anticancer compounds being either natural or natural product-derived products, indicating potency of these scaffolds29. Hence, libraries designed and synthesized around the basic structure of such compounds have better chance of displaying desirable biological and pharmacological properties.

As a primary screen for cytotoxic activity, cancer cell growth inhibitory properties of plumbagin derivatives along with parent compound were examined using SKNSH, Hela, HepG2 pancreatic carcinoma cell line (PANC 1), breast cancer cell line (MDA-MB 231), neuroblastoma cell line(IMR-32), by MTT assay. doxorubicin was used as the reference drug and the results are summarized in Table-1. The results revealed that some of the synthetic analogues were exhibited promising anticancer activity when compared their parent isolated compounds. Among the tested all derivatives, compounds 9,12, and 16 showed more potent active against HePG2 cell line with an GI50 value of 0.02±0.ol, 0.03±0.ol, 0.06±0.03 µM respectively and Compounds 3, 5, 24, 25 and 26 manifested potent activity against PANC 1 with an GI50 value of 0.4±0.03, 0.ol±0.ol, 0.3±0.03, 0.2±0.ol, 0.1±0.ol, µM respectively. While remaining all compounds showed moderate activities on all cell lines. Through it is difficult to discuss the structure activity relationship criteria responsible for the cytotoxic activities in this set of compounds from these results, it can be concluded that me, bis(4-fluorophenyl, 4-ethylpiperazin-1-yl on N in piperezens increase the activity and 0-C1, p-methyl, p-no2 on benzene increase the activity.

All cell lines (SIHA, PANC 1, MDA MB -231, IMR -32, DU-145 and A549) used in this study were purchased from the American Type Culture The cell lines (ATCC), United States. The synthesized test compounds were evaluated for their in vitro anti proliferative activity in these six different human cancer cell lines. A protocol of 48 h continuous drug exposure was used, and a SRB cell proliferation assay was used to estimate cell viability or growth. All the cell lines were grown in Dulbecc0’s modified Eagle’s medium (containing lo% FBS in a humidified atmosphere of 5% C02 at 37 °C). Cells were trypsinized when sub-confluent from T25 flasks/60 mm dishes and seeded in 96-well plates in lo0μ1 aliquots at plating densities depending on the doubling time of individual cell lines. The microliter plates were incubated at 37 °C, 5% C02, 95% air, and lo0% relative humidity for 24 h prior to addition of experimental drugs and were incubated for 48 hrs with different doses (0.ol, 0.1, 1, lo, ,lo0µM) of prepared derivatives. After 48 hours incubation at 37 °C, cell monolayers were fixed by the addition of lo% (wt/vol) cold trichloroacetic acid and incubated at 4 °C for 1h and were then stained with 0.057% SRB dissolved in 1% acetic acid for 30 min at room temperature. Unbound SRB was washed with 1% acetic acid. The protein –bound dye was dissolved in lomM Tris base solution for 0D determination at 5lo nm using a microplate reader (Enspire, Perkin elmer, USA). Using the seven absorbance measurements [time zero, (Tz), control growth, (C), and test growth in the presence of drug at the five concentration levels (Ti)], the percentage growth was calculated at each of the drug concentrations levels. Percentage growth inhibition was calculated as:

[(Ti-Tz)/Tz] x lo0 for concentrations for which Ti

Plumbag0zeylanica was collected from Tirumala forest, Tirupathi, Andhra Pradesh, India, in August 2007. The plant material was identified by Dr. K. Madhav Chetty, Botany Department, Sri Venkateswara University, Tirupathi. A voucher of the plant was deposited in the Herbarium of the Botany Department.

The shade-dried roots of Plumbag0 zeylanica were powdered in a pulvarizer (lo kg) and extracted with chloroform/methanol, 1:1 followed by the concentration under reduced pressure. The resulting extract was (70 g) chromatographed over silica gel (60–120 mesh) and eluted with n-hexane/ethyl acetate combinations of increasing polarity. Plumbagin (12 g) was obtained by elution with n-hexane/ethyl acetate, 99:1.

General procedure for the synthesis of piperzene (Secondary amine) derivatives (2-7):

to a solution of the Compound 1(leq) in ethanol (3m1) in presence of potassium carbonate as a catalyst was added secondry amine (piperzene) stirred at room temperature for 8 h. The reaction mixture was diluted with Ethyl acetate (lo m1), washed with c0oled ice and brine solution. The organic layer was dried over Na2so4, filtered, and concentrated under reduced pressure. The residue was purified by column chromatography using the mobile phase Acetone in Hexane afforded secondary amine (piperzene) derivatives.