HIV-1 Integrase (IN), is necessary enzyme for the replication of the virus into the host cells. It catalyzes the integration of viral DNA into the genome of host cells. The mechanisms employed by the enzyme are strand transfer and 3′-end processing reactions. The enzyme is vital for the virus life cycle and as a result it is a target for anti-HIV-1 drugs. It is reported from previous studies that HIV-1 protein Vpr has inhibitory effect on Integrase activity. The inhibition is a result of protein-protein interactions. Specifically Vpr interacts through its C- terminal domain. Results from previous studies indicate that the active petptide inhibition motif is peptide 1 (Figure 1). 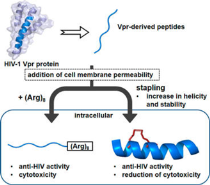 Figure 1. Amino acid sequences of peptides 1 and 2, and outline of the study.

Regarding the SAR studies, E-K pairs were introduced in i and i + 4 positions to increase the helicity, by forming salt bridges. In the same study to peptide 1 was added an octa-arginine tail, the purpose of which was to improve, cell permeability. The presence of the octa-arginine tail however resulted in increase of cytotoxicity of the peptide.

The hypothesis on which the current study was based is that by finding a different way to improve cell permeability without the 8-R tail the cytotoxicity of the peptide would decrease. The idea was to make the peptide more lipophilic, by adding hydrophobic groups on the external of the a-helix, and at the same time improve its helicity. An available method to achieve that is the use of a-helix stabilized peptidomimetics. Specifically, hydrocarbon stapled peptides, in which a hydrocarbon link is formed between successive turns, via a ring closed metathesis (RCM) reaction, were used. By having a hydrocarbon linkage between positions i and i+4 in the a-helix, the helicity is improved because the two positions are covalently bound via the hydrocarbon chain, and simultaneously the lipophilicity and cell permeability of the peptide is increased because of the presence of a hydrophobic hydrocarbon chain on the external part of the a helical structure. In Figure 1 is presented an outline of the study.

Design and synthesis of the peptides

The lead peptide sequence used was sequence 1 (Fig.1). From previous studies it was known that residues: Phe12, Ile13, Phe15, and Ile17 are vital for IN inhibition activity. Stapling was performed between i and i+4 positions by avoiding substitution of these residues. Protected linear peptides were constructed by Fmoc-solid phase peptide synthesis. The RCM reactions of the protected linear peptides were performed on the resin by treatment with ruthenium-mediated Grubbs second catalyst in 1,2-dichloroethane. All hydrocarbon and all ether stapling was performed, however the first technique resulted in higher yields as it’s presented in Table 1. After RCM, the peptides were deprotected, acetylated, and cleaved from the resin. Purification of the stapled peptides was done by HPLC. However it is not the purpose of this paper to present experimental details. 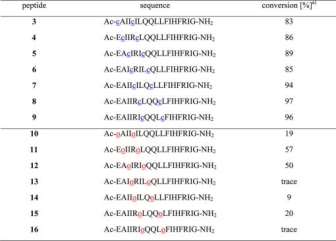 Table 1. Sequences of Designed Stapled Peptides and Their Conversion Yields of RCM Reactions

CD Spectroscopy was used to analyze the secondary structures of the synthetic stapled peptides, 3S−9S and 11S. Linear peptides, 4L−6L, 8L, 9L, and 11L, were used as control (Figure 3). Negative peaks at 208 and 222 nm, are characteristic for α-helical structures. All stapled peptides, except 3S, formed α-helices. The corresponding linear peptides on the other hand including compound 1 showed a broad negative peak around 215 nm, which indicates a β-sheet structure. It is obvious that stapling of the linear peptides leads to the formation of α-helices. 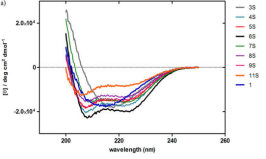 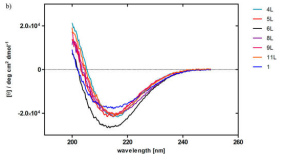 The next step was to determine the potency of the synthesized peptides using integrase inhibition assays. IC50 values were determined for stapled and linear compounds regarding both 3-end processing and strand transferring reactions (Figure 4 Left). Anti HIV activity was also screened for all peptides using MT-4 Luc Assays (Figure 4 Right). 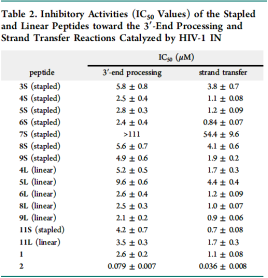 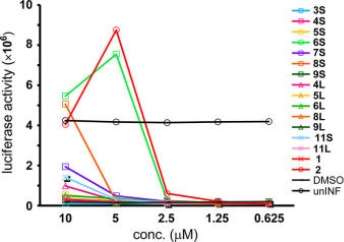 All compounds had integrase inhibition activity, however lead compound 2 was way more potent. Regarding the MT-4 Luc assays compound 6S showed similar anti HIV activity as lead compound 2 at concentrations higher than 2.5 um. Compound 8S also showed significant activity at concentrations higher than 5 um. 6S and 2 have almost the same level of anti-HIV activity in cells, however 2 has much higher IN inhibitory activity in vitro than compound 6S.

IC50 values were determined for the new set of peptides and also MT-4 Luc assays were performed. The presence of the octaarginine tail is necessary for the inhibitory activity however it still makes the peptides cytotoxic. Different lengths in the Arg tail were also examined. Still the octaarginine (17) conjugated peptide is the most potent but compounds 22 and 23 had good potency and lower cytotoxicity than 17, so those compounds were selected as lead compounds for further development. DNA binding experiments were also performed to examine the role of Arg8 tail, and the results indicate that 17 has high DNA binding affinity and that might influence the high inhibition activity of the peptide.

Stapling caused a significant increase in α-helicity and cell membrane penetration, and in the expression of potent anti-HIV activity in cells. Stapling and the addition of octa-arginine caused cell membrane penetration. Stapling by itself did not involve cytotoxicity while incorporation of octa-arginine into the structures increased the cytotoxicity of the compounds.

Generally it was a well-organized paper. It had good flow of information and background information was provided. The hypotheses were not stated but were easy to understand. The experiments and the data supported the conclusions and the concepts. The figures and the graphs were interpretable and accurate in supporting the conclusions related to them. However there are several interesting points to be addressed.

Another question that need to be addressed is why the stapled peptide 3S did fold into b sheet structure unlike the other stapled peptides which formed a helices. It would be interesting to examine the role of the substituted amino acids of 3S, in the folding of the peptide.

Regarding the role of the octaarginine tail, the DNA binding experiments indicate that the octaarginine conjugated peptide has affinity for DNA binding. However it is unclear how exactly the tail affects the potency and the cytotoxicity. Further experiments are necessary to clarify that. I would suggest some NMR experiments to investigate the binding. First 1H-15N HSQC may be performed to the (Arg)8 fused peptide before and after binding with DNA. That would show which residues are involved in binding and would give data to determine the specific interaction.