Alkanes are saturated hydrocarbons due to containing the full amount of hydrogen atoms possible. Alkanes also contain single bonds. The overall formula of an alkane isCnH2n+2, where n shows the quantity of carbon atoms present.

The chemical and structural formula of alkanes (see figure 1).

Isomers are molecules with an identical chemical formula, but differ in terms of having different structural formula due to varied arrangement of atoms, isomers also have different properties.

These two compounds are isomers of each other due to having the same chemical formula of C4H10, but vary in terms of having different structural formula. The above propane has an added methyl group, thus called methyl propane.

Figure: 5 Example of a homologous series of alkanes with structure of CnH2n+2, Ivy Rose, (n.d)

2.4, 2.5 – As alkanes are saturate hydrocarbons, they are deemed unreactive due to containing single bonds such as C-H and C-C bonds which are quiet strong and difficult to break due to the strong intermolecular force. However the only ways alkanes are able to react is via combustion, chlorination and cracking.

Combustion is exothermic process and is known burning of carbon compounds, in particular hydrocarbons is a vital source of heat energy. For example by combusting alkanes with oxygen it releases energy which can be instantaneously be used as fuels. In combustion of alkanes such as propane, every single covalent bond within the reactants is broken down and forms a new set of covalent bonds within the products. The balanced formula is:

Combustion also producescarbon dioxideand watervapour which is shown above. Another example of combustion of methane:

If there is not enough oxygen supply within the air, then this would result then would form carbon monoxide gas which is poisons. For example, the below equation shows the partial combustion of methane due to lack of oxygen present:

However the burning of alkanes has the potential to cause many enviromental problems, such as the toxic waste gas carbon monoxide and unburnt hydrocarbons which are present in cat emissions. Additional excessive combustion of hydrocarbons increases carbon dioxide emissions which contribute to the greenhouse effect. 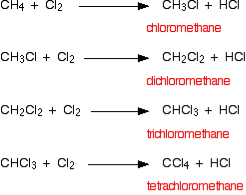 Another reaction of alkanes is called chlorination which is the when alkanes react with chlorine. For example, when the alkane methane and chlorine react together, the hydrogen atoms of the methane are simply replaced one by one by chlorine atoms. Thus forming a combination of compounds of chloromethane, dichloromethane, trichloromethane and tetrachloromethane.

Figure:6 Reaction and products that occur between methane and chlorine, Chem Guide, (2000)

Some fuels which are made from oil mixtures contain large hydrocarbon molecules which are not useful, as they do not flow easily and are quiet difficult to ignite. This is when the process of the cracking, a thermal decompositionreaction comes in. 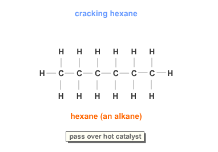 3.1 – Alkenes are also hydrocarbons compromising of carbon and hydrogen atoms, but also have one or more double bonds present within the carbon chain. Alkenes are also a series of compounds within a homologous series but have a different general formula of CnH2n.

Geometrical isomerisms are formed when atoms or groups of molecules are arranged in a different way due to limited amount of rotation of the bond or bonds within a molecule.

Another example is the 1,2-dichloroethene, forms the trans-1,2 dichoethne and Cis-1,2 dichroloethee gemotical isomers, (See figure 10)

Alkanes are saturated compounds with single covalent sigma bonds, thus are more stable than alkenes as high amount of energy would be needed to break these. Alkenes are unsaturated with the presence of carbon-carbon pi-bonds and sigma bonds which connects to carbon atoms which makes them highly more reactive than alkanes due to the existence of double bonds and because they are unstable as they want to achieve full saturation. Another reason alkenes are ore reactive is because in double bond there is a lone pair of free electrons which is easily lost thus highly reactive as its easily lost in order to be covalently single bonded Thus when alkenes react in such reactions such as combustion or additions, it mainly involves the rupture of the pi bond, thus forming newsingle bonds. Within the alkenes, the double bond allows more electrons to be put into the joining within the two carbon atoms, thus held less strongly making them more likely to react with less input of energy needed to overcome the activation energy of reaction

3.4, 3.5 – The main reaction of alkenes is the addition reaction which occurs due to the extra electron found within the C=C double bond which causes alkenes to be attacked by species called electrophiles in which “like” positve charged electrons. Due to the electrophile having an positive charge it is attracted towards the alkene which causes the electrons within the pi bond to break, then electrons from it are used in order to form a bond to the positive end joining the two carbon atoms to other things.

Another example of addition reactions is hydrogen and hydrogen chloride.

Due to alkenes containing pi-bonds (double or triple) which can be broken easily due to their overlay, it makes them the prime target for addition reaction, which stabilises the molecular orbitals by forming sigma-bonds, which are stronger.

Another example ofan addition reactionis the bromine test which is simply used in order to tell the difference between an alkane and an alkene.

For example, the bromine is decolourised because a colourless dibromethane compound forms. For example: 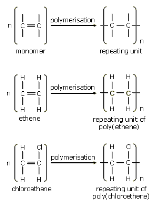 3.6 – Polymerisation is an important reaction of alkenes. During polymerisation all the atoms within the alkenes are used to form a polymer, a polymer is a large long-chain of molecule of repeated units which formed when smaller molecule called monomers join together. For example, several chloroethene monomers join end-to-end to make poly(chloroethene), which is also known as PVC via the polymerisation process. (See figure 13)

Alkenes act as monomer due to the presence of the double bond. Different polymers have different properties, so they have different uses which make them important in everyday life. For example, the polymer polyethene is commonly used to make plastic bags and bottles, whereas polyproper is used to make crated and ropes and polycholorethene is uses in water pipes and commonly in insulation of electricity cables.

However regardless of the uses of polymers being useful their disposal creates various problems, due to being non-biodegradable, because being unreactive to majority of chemicals and bacteria. However can only be recycled, but this is a costly process. They can also be burnt which does produce energy but again produces toxic fumes.